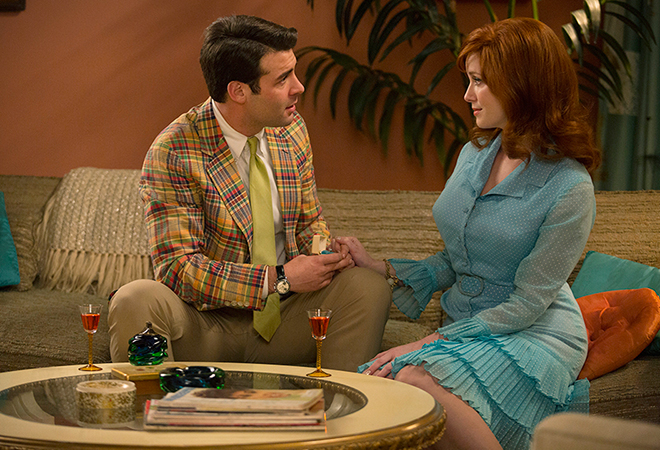 Sweet and spontaneous or saccharine and contrived? After weeks of glacial freeze, Peggy and Don’s slow dance to Frank Sinatra’s “My Way”—coming moments after Peggy weeps over turning 30 while husbandless (if not childless), and Don cops to fears “that I never did anything and that I don’t have anyone”—was lovely, but the soundtrack seemd a bit too on-the-nose.

Peggy and Don’s reconciliation came, as we knew it would, over work. They’re geniuses united by the quest for the perfect idea. Lou is a paper-pusher; Peggy and Don are bottled lightning. Despite Peggy’s careful posturing to keep Don in check, a surprise meeting undercuts her and nearly turns into the source of another fracas: Pete wants Don to deliver the carefully crafted Burger Chef pitch. (“Don will give authority. You will give emotion.” Peggy’s priceless, even rejoinder? “I have authority, and Don has emotion.”) The planned pitch is good but not great, and Don knows Peggy well enough to sow insecurity with his suggested revamp, starting a chain reaction of doubt. Don, on the pros: “The account man is overjoyed, and the client’s onboard.” Peggy: “Those are the cons and you know it.” Previous episodes, like season five’s “Far Away Places,” have toyed with Peggy emulating Don’s work style. In this episode, they literalize the parallels with Peggy demanding Don walk her through his creative process. Later, she stretches out on the couch with a cocktail, a pure Draperesque move.

Peggy’s discomfort with the campaign mirrors her discomfort with the traditional feminine roles she is expected to play. The woman in the car at the beginning feels guilty, and the initial campaign focuses on giving women permission to take a night off as Suzy Homemaker by elevating the husband as the hero. But these modes are outdated. “Does this family exist anymore?” Peggy wonders aloud. “It’s going to look like 1955.” (Don, one of the biggest traditionalists around, counters, “1955 was a good year.”) This time it’s not Don but Peggy who saves the day with an eleventh-hour creative solution. In an episode that focused on the broken personal lives of our characters, ads that speak exclusively to the traditional nuclear family ring false. We’re seeing the gradual easing into a different era of advertising, one that both reflects and drives a more expansive notion of kinship. We end with our characters in a tableau, framed in the clean, well-lighted comfort of a mass-market fast-food eatery.

Speaking of family men, this episode also saw the return of Bob Benson (Don Draper 0.5, with equal deception and opportunism but half the brilliance of the original), bringing with him all the discomfiting echoes of Chevy from last season. (Best throwaway moment of the episode: eyepatched Ken waxing paternal to the Chevy guys who nearly killed him, “You really have to keep an eye on him,” and the Chevy crew’s guilty silence.) Semi-surprise: In a throwback to Sal Romano’s heterosexual overcompensation, the lustiest of the Chevy suits turns out to be gay, arrested for attempting to fellate an uncover cop. Bob’s late night rescue mission turns up some valuable intel: General Motors is reclaiming the Chevy account that SC&P sweated blood to manage in-house, but they plan to sweeten the change-up by transferring the Buick instead, along with throwing a honeyed deal Bob’s way. As Bob processes these revelations, Mr. Chevy announces his plan to call in sick, since his wife understands his predilections—thank God. “Good idea,” Bob says absentmindedly, but we can already see the wheels turning. He’s not contemplating PTO.

A few scenes later, he springs a ring on Joan, offering her a sexless understanding and a mansion in Detroit, declaring himself the highest bidder for her sexy but nearly 40 wares. To be honest, we were sweating it a bit—Joan has shown herself to be nothing if not a fiscal pragmatist—but mercifully, she turns Bob down. “No, you’re not,” she tells Bob, “because I want love. And I’d rather die hoping that happens than make some arrangement.” Go Joanie! A partner, she’s left in the living room, head spinning, trying to translate what the news means for the agency.

Completing the modern-family triptych, we also revisit Pete’s newish squeeze Bonnie—she who shall put up with no bullshit from anyone, least of all Pete. She makes clear her expectations regarding her place in Pete’s life for his return trip to California, but Pete, snide prince that he is, takes her for granted. After co-opting her Barbie for Tammy as his own gift, he bails on Bonnie to stake out Trudy’s return from a date, then throws a tantrum over his wife’s sex life, actually daring to seize the moral high ground. Bonnie, bless her, has none of it. Later when Pete tries to cover his bad behavior with seduction, she burns him: “You’re not going to fuck your way out of this,” she tells him, before stalking off to wash her feet. She should have made him do it.

Next week marks the season finale of our mini-arc, and another 10-month wait until the ultimate, we’re-not-kidding-this-time wrap-up to the whole series. With a short season it’s difficult to draw broad generalizations, but it looks like SC&P is due to lose Chevy, gain Buick, promote Harry “I never met a plaid I didn’t like” Crane to partner, announce the acquisition of Commander cigarettes, and—if he’s lucky—Don’s enduring status on the creative team. We’ve yet to see a major blowup between Don and Lou, but the gladiatorial battle between dazzling talent and soul-deadening mediocrity must be fought. Amid the fireworks perhaps we’ll find time to check in with Sally. And we pricked up our ears at Megan’s allusion to that missing fondue pot, last seen during a neighborly New Year’s get-together in the season six opener, which ended with Don in Sylvia Rosen’s arms. Its absence feels suspect. The Draper marriage has been limping along all season. Either as a catalyst for Don’s exposure or a symbol of infidelity, the fondue pot (the honey pot?) might finally spell the end.