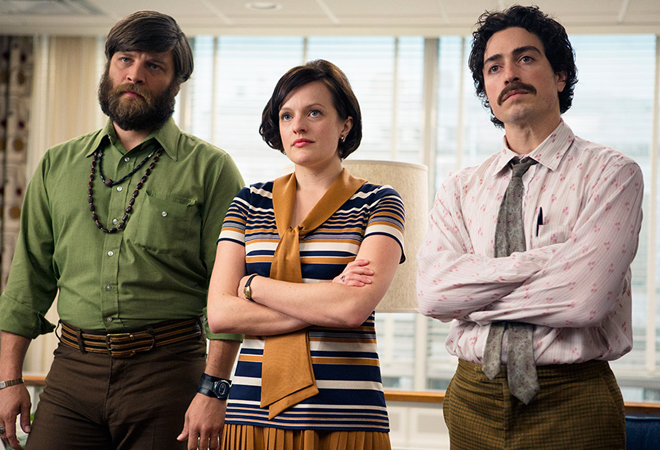 Mad Men might be the most economical show on television. It never lets anything go to waste, including the heavy Inferno symbolism of last season. This week, a certain poster that actually debuted in Roger’s office last season again took center stage: Seymour Chwast’s 1967 Commedia illustration of Mephistopheles holding court over a fleet of lost souls, looking like a sinister Mr. Kite. As Roger’s son-in-law and the former Mrs. Sterling argue over the wayward Margaret’s fate, Satan looks on benignly from the wall. When Don breaks in to Roger’s office to nab a bottle of the hard stuff, choosing temptation over sobriety, he confronts the image for a moment before absconding to his office to get tanked.

“This machine is intimidating because it contains infinite quantities of information, and that’s threatening,” Lease Tech Lloyd tells Don. “Human existence is finite.” This week’s episode’s was called “The Monolith,” a moniker for the massive computer that displaces SC&P’s creatives from the creative lounge, a symbol of Don’s seemingly insurmountable drinking problem, and a nod to the immense and anxiety-provoking future that faces our characters—a world where men can fly to the moon, a world where Don’s existence has never looked more finite.

As Lloyd notes, the new technology tends to cause a “cosmic disturbance,” becoming a proxy for whatever drama is going down in any given office. In Don’s case, the drama lies within himself. Sauced beyond recognition after his errand to the wet bar, he drunk dials the stalwart Freddy, who treks to the office to shepherd his former colleague to safety. “Are you just going to kill yourself?” Freddy demands. But Don glimpses Lloyd on the way out, and speaking from a troubled psyche, attributes to the genial visionary a more nefarious identity. “You go by many names. I know who you are,” he says, addressing the computer salesman as the Prince of Darkness. “You don’t need a campaign. You’ve had the best campaign since the dawn of time.” In the depths of his wretchedness, Don could be speaking to himself here: After all, Dick Whitman has been selling himself since the beginning.

Another, more hopeful symbol emerges as a counterpart to the Dante poster and it may become Don’s talisman: a New York Mets pennant. Don finds it under the credenza, a vestige of Lane, that great Americanophile, who was ultimately destroyed by his adopted country. In that sense, the pennant initially appears as a sign of misplaced faith and eventual defeat, a meaning that resonates for Don. He pitches it into the trash, but by the next scene it’s made it onto his wall—the only scrap of color in an office otherwise greyer than a tomb. “I started this agency,” a stung Don tells Cooper. “Along with a dead man,” the senior partner responds, “whose office you now inhabit.” (Jesus, Cooper. That’s cold—like your old, wrinkled hands. People who live in glass offices shouldn’t throw stones.)

Amid Don’s bender, the Mets become the object of his fixation. And with good reason: in October 1969, the team overcame its reputation as the screw-up stepbrother to the Yankees and achieved one of the greastest upsets in baseball history, winning the World Series against the Baltimore Orioles. After a stern talking-to from Freddy, Don gropes his way back toward sobriety. “I’ll have your tags by lunch,” he tells Peggy, having earlier flaunted her limited authority. Redemption may be on the horizon.

We need to talk about Peggy. After three distasteful episodes in which she mooned over Ted, threw a hissy fit at her secretary, crowed over Don’s downfall, and otherwise humiliated herself, it seemed like Peggy had briefly taken up Betty’s fallen mantle as the writing room’s favorite punching bag. (Probably as a backlash against all her Sheryl Sandberg-esque leaning in—even we couldn’t handle one more triumphant glass-shattering scene.) But here, Peggy reminded us again why we love her. After Lou wisely buys her loyalty with a well-timed raise (he’s no fool—he knows he stands to lose from any Draper-Olson alliance), Peggy, tasked with putting Don on her team, marches up to his door before her nerves fail her. Since playing the supplicant is distasteful, she adopts an ingenious solution: play home court advantage. She calls Don and a junior copywriter into her office, earning a stony glare and passive-aggressive resistance until Don, by episode’s end, capitulates. With her former mentor really and truly on his best behavior, a reconciliation between equals could be in the offing.

We finally got the other half of the oddest exchange from the season premiere, a heavily scored “forgiveness” scene between Roger and daughter Margaret. In the interim, she’s ditched her milquetoast husband and four year-old son, joined a commune, and taken some lovers. “I’m sorry, but you don’t get to do this,” Roger rightfully scolds her, but she throws his guilt trip back at him. Why should she think of her son? Her father outsourced her childhood to secretaries. She walks off and Roger, muddied and disgraced, heads home. Roger and Mona’s trip north revealed some overdue insight into how their indulgent, matrimony-oriented parenting style might have backfired. After hustling himself back into a secure position at SC&P following the loss of Lucky Strike, Roger has taken an increasingly self-destructive dive, experimenting with acid and free love. “Marigold” has inherited her father’s legacy. It’s possible Margaret’s implosion could prove the wakeup call Roger needs to turn his life around—but then, he’s always been skilled at sidestepping productive self-analysis.

No teary phonecalls from Megan this episode, but it’s likely next week will feature an update on the state of the Draper union. And what of Sally and Miss Porter’s?