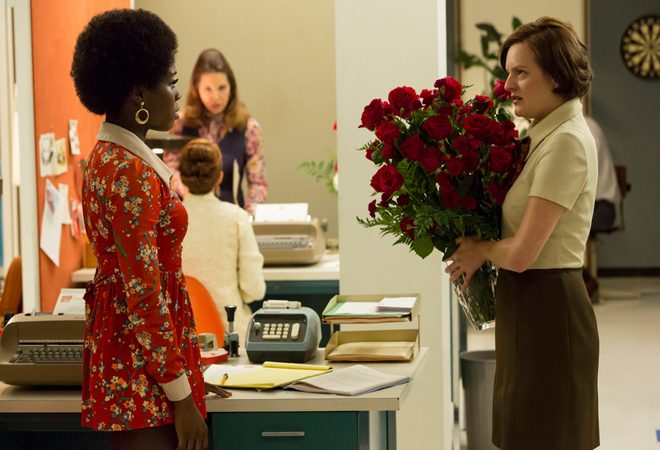 After a sedate season opener, Sunday night delivered a fine episode, the second hour we would have had if the premiere had been a double-header. More importantly, it featured what’s only the series’ second scene to meet the racial equivalent of the Bechdel test, with two named black characters briefly discussing something other than a white character. (The other, as we recall, was Dawn and her engaged friend sniping in the diner last season.) Perhaps Weiner has tired of the well-deserved critiques that the show has largely ignored race or was worried that Mad Black Men was stealing his ratings. But in an episode that had white male characters stymied, undermined, or treading water, “A Day’s Work” featured Sterling Cooper’s women moving in, kicking ass, and taking names—and finally, black characters are part of that.

Don’s formerly mealy-mouthed secretary, who delivered a self-possessed retort to Ginsberg in the premiere, starts out swinging by Don’s apartment to deliver his mail and the latest news from the front. While Don puts on a coat and tie to disguise the truth, the previous sequence of him drinking alone made it pathetically clear: This visit is the highlight of his day, and while he wants to prolong it, Dawn (Teyonah Parris) has better things to do. Then Don offers her “car fare.” It’s always dicey when Don gives money to a woman, since it’s usually part of a power-play. He threw bills in Peggy’s face back in season four’s “The Suitcase,” and tossed some cash on Sylvia’s bed last season, equating her with the whores of his youth. Don’s move here is at first more of the same, a not-very-coded bribe to continue feeding him information. Dawn declines, insisting that as long as everything she does is above-board, she’ll work for free. (Dawn may be a bit dull, but she is arguably Mad Men’s most moral character.) Having established her boundaries, she can accept the cash when Don presses it on her a second time—without obvious strings attached.

But Dawn hits her breaking point under the badgering of Lou Avery (was there ever a more clueless and obnoxious boss?) and calls him out for being inefficient and a bad husband. Even Joan’s murmured restraints can’t stem the tirade. Then Shirley, Peggy’s new black secretary (what happened to Phyllis? a casualty of the merger?) finally musters the courage to tell Peggy those long-stemmed roses are from her fiancé, thank you very much. It’s hard to overstate how appallingly the white supervisors come off in these scenes: Lou as an insensitive, lazy jerk, Peggy as a vain, spiteful shrew. It’s quite the change from last season, when Peggy offered Phyllis a heartfelt hug following the assassination of Martin Luther King, Jr. When Dawn and Shirley swap stories in the kitchen, they call each other by name—perhaps a verbal eye roll at their white colleagues who can’t tell them apart. But when the dust settles, Dawn and Shirley both receive a promotion.

Following some well-timed advice from Jim Cutler that “maybe [she] should” complain about having two jobs, Joan moves upstairs and cedes her Grand Central Station office to Dawn—who last season professed not to care what other people thought of her, as long as she had Joan’s respect—as the new head of personnel. Shirley takes over Dawn’s desk for Lou. (Mad Men’s deleted scenes: Meredith’s disastrous four-hour stint working the phones.) That’s three promotions in 46 minutes, and two-thirds of them are bestowed on black women.

After the off-books partners’ meeting it’s looking dismally possible that Lou might stick around for a while, which would make Shirley relatively secure. And Dawn’s stability now looks to be rock solid: If berating her boss didn’t get her fired as a lowly secretary, it’s unlikely anything else will unseat her from her filing cabinet throne. The smile that creeps across her face at episode’s end has been a long time coming, but there’s pure joy in it.

We’ll spare a brief word for Don and Sally, who we missed last episode. Proving once again she’s the Teflon Kid, Sally bounces back from further paternal disappointment when she catches Don in two lies in the space of two minutes. He’s not sick and he’s definitely not working, though he seems to be taking Freddy’s advice not to become damaged goods. (Too bad his reputation precedes him.) The car ride back to Miss Porter’s not only allows the first open father-daughter acknowledgement of Don’s affair since “Favors,” but it gives him a chance to make good by prolonging the trip with a meal. Don doesn’t share everything, of course, leaving out the finer details of the Hershey pitch, but he redeems himself enough to earn an unexpected “I love you” at drop-off. That’s the best valentine Don’s going to get.

P.S. As far as getting things in the open, Ted has never looked so haggard. Is it because he misses Peggy, or because he’s forced to share an office with Pete? We had to chuckle last season at the prospect of Peggy’s two most significant exes, neither of whom knows about the other, sharing such close quarters. Ted almost tipped his hand before Pete shut down further revelations. Here’s hoping that’s one scene Weiner finds time to squeeze into the remaining 12 episodes.