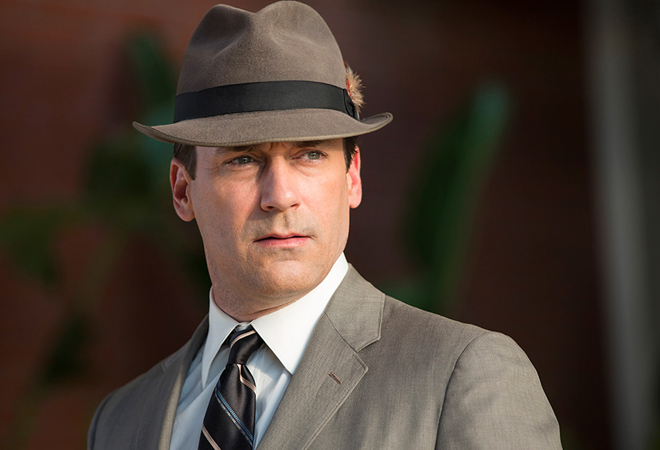 Are you ready? Because I want you to pay attention. This is the beginning of something.

The final season of Mad Men kicked off Sunday night with a first in the show’s history: a sustained, fourth wall-breaking gaze and ad pitch from Freddy Rumsen, of all people. This is as close as we’ll get to Matt Weiner telling the audience: I know you’re watching. Now, lean in. Cue Peggy’s awed response, a self-conscious, meta-standin for the hoped-for audience reaction: “Wow. That’s a homerun. Actually, it’s kind of an end run.” But we aren’t talking about football.

With only 14 episodes to go, Mad Men is entering the home stretch, and Weiner has said that he’s intent on bringing the show in for a landing. That means no Red Weddings, or Purple Weddings, or jury-rigged-assault-rifle-powered blazes of glory. While Mad Men has never been short on shock value, it’s unlikely the next seven episodes are going to feature, say, Pete Campbell choking to death on poisoned pastrami at Canter’s.

That feeling stayed intact after a debut episode that offered few surprises but little that jarred us.

Despite much hemming and hawing in the blogosphere about where the new season would begin chronologically, the episode picked up pretty much where we expected: at the beginning of 1969, ending with Nixon’s inauguration on January 20. It’s been barely two months since we left our crew, but it seems that over the holidays Santa brought everyone new clothes, and the fashion has a distinct late-’60s flair.

SC&P has hired a new black secretary who sports an afro. Megan looks like a million bucks as she picks up Don from the airport in her minidress, but their new bicoastal marriage is showing strains. Peggy is going crazy reporting to a “good enough” boss and getting hassled by her tenants while Ken, squinting around an apparently permanent eye patch, turns to Joan to help shoulder the accounts that have fallen to him in Pete and Bob’s absence. Ted is recovering from his post-Peggy hangover with a little hair of the dog, while Pete thrives amid the tar pits. Roger has graduated to free love. And Don, looking more self-possessed than he has a right to, breezes into Los Angeles to visit Megan and then returns home to work—not to SC&P but as a freelance ad man with Freddy Rumsen filling in as the unlikely peddler of his 24-carat ideas. Don is still getting paid after two months on leave, so this is about staying sharp and staving off desperation. Which, as we learn by episode’s end, isn’t going so well.

On the plane, Don gets a vision of his future in the person of Neve Campbell: Her alcoholic husband kicked the bucket at 50, just when he seemed to be getting better. Don may be off the hard stuff, but he’s still damp. Megan is more independent than ever with her own car and house (“our house,” she has to correct herself); it’s Don’s presence that makes her nervous. (We’ll likely check in with Sally in a week or two.) Only Peggy, Don’s surrogate, also feels her life unraveling: A month after Christmas, her lonely tree still sits in the corner, withering into a fire trap. She can’t even keep her brother-in-law around for company. Seeing his protective streak toward her sister sends her to her knees, with a suggestive look upward that could almost be a prayer.

Joan’s storyline proved the most satisfying, with some impressive backchanneling to hold onto the Butler account. We loved the moment where Joan bristles when the business professor asks if she has anything to trade for his services before realizing he wants information, not her—and then proceeds to school him on the difference between fee and commission-based models. But it’s still Joan, a partner, who steps in as Ken’s junior and then suffers his reprimand for using his office (Pete’s old office).

As an episode, “Time Zones” was fine. It didn’t wow or disappoint, but with only an hour instead of the double-header premieres we’ve become accustomed to, it barely had time to take each character’s pulse. The greater danger seems the decision to drag out the final season over two years à la Breaking Bad. Alongside a spate of newer shows testing audience commitment, Mad Men has only six more episodes to work viewers into a finale-like lather, while two mini arcs means there’s a risk that each set of stakes will feel smaller. By the time we come to the end of Don Draper’s epic saga, will audiences still care?