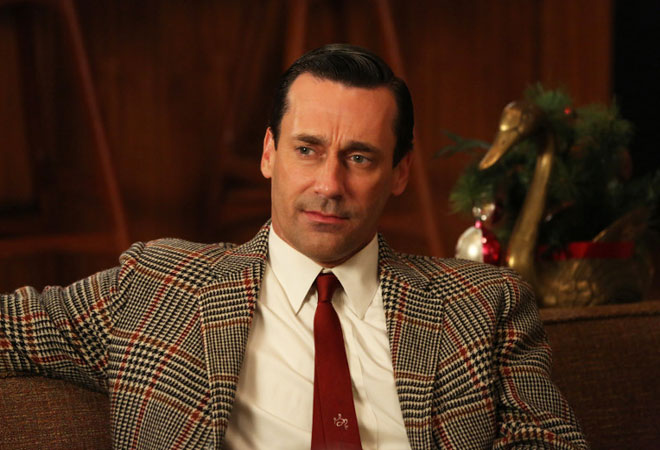 It’s good to have the gang back.

With the reassuring appearance of each familiar face (Peggy, thank god!) alongside jaw-dropping new details (Sally’s voice! Pete’s sideburns! And let’s not even mention Abe.), season six of Mad Men picks up in late 1967, post-Summer of Love and some nine months after the end of season five. That’s nine months since Megan’s career change, Peggy’s departure, Joan’s indecent proposal, Lane’s suicide, and Don’s beat of hesitation in a darkened bar as a gorgeous woman murmurs, “Are you alone?”

In a clever bookend to the series pilot, “The Doorway’s” early scenes of connubial and tropical bliss ended where we suspected they might—with Don ringing in the New Year in the arms of another woman, a friend and neighbor, one floor below his sleeping wife. As Henry Francis observed, “There is no fresh start. Lives carry on.” With less than two seasons to go, it seems series creator Matthew Weiner is circling back to the formula that made Don, and the show, great: good at work, bad at home. For Don, once scrupulous about keeping his tomcatting and his home life separate, it’s his riskiest affair yet: colossally, suicidally stupid.

Don once sneered at the suggestion that everyone has a death wish, but in this episode his own was on prominent display. From the opening scene of a man in the midst of a heart attack to Don’s encounter with a Vietnam GI, the deaths of Roger’s mother and shoe shine man, and Don’s disturbingly subtexted ad campaign, the premiere played with themes of mortality. Don is the only one shocked by Sheraton’s response to his “jumping off” pitch—he’s so wrapped in denial, he can’t recognize the desperation in his own imagination.

After a relatively quiet season five in which it seemed Megan’s sunny personality might appease Don’s demons, the ghost of Dick Whitman has returned rattling the chains of childhood woes. The confusion of PFC Dinkins’ army-issued lighter for Don’s own stirs uncomfortable memories of his transformation into an ad man. The death of Roger’s mother only compounds it. Don dodges Ken’s good-natured inquiry after Mrs. Draper, but the eulogy for the late Mrs. Sterling—recalling a woman slavishly devoted to her son—can’t help but raise comparisons to Don’s mother, a prostitute who died in childbirth. He vomits, only the second time (other than The Suitcase, which also centered on loss and Don’s past) that we’ve seen him lose such physical control.

Serious stuff (and you can bet a garland of Vietcong ears that’s not the last we’ll hear about Vietnam), but can we spare a moment for Betty Draper? After a cartoonishly cruel character arc last season, which involved her joining Weight Watchers and baiting Sally with Don’s first marriage to take a swipe at Megan, Betty grows up—kinda, sorta. She takes an, er, disconcerting interest in Sally’s violinist chum Sandy, teasingly suggesting that Henry rape her. (“You said you wanted to spice things up.”) She even sits down with Sandy for the kind of motherly tête-à-têtes she denies her own daughter. Most tellingly, when she finds out Sandy has lit out for St. Mark’s Place, she acts like a grown-up and goes looking for her. Then she makes goulash and becomes a brunette. Betty, what the hell?

Observations, loose ends, and WTF moments:
Sally – How much do we love hearing her call Betty by her first name in her throaty new alto?
Joan – She wasn’t around nearly enough, but we expect subsequent episodes to fix that. Also, for once Joan seems to be channeling Peggy’s style with her new Madame President vest.
Ted Chaough – After Don, Peggy’s Zen boss just might be the antidote she needs for some work-life balance. That, or another classy workplace affair?
BFFs – When did Stan and Peggy start having late-night work chats—before or after he sent her to the Playtex presentation with lipstick smeared across her teeth?
Bob Benson – Not sure what this new guy’s game is, but if he can get Ken Cosgrove riled up, he’s bad news.
Dr. Rosen – This is the first time we’ve seen Don enjoy a friendship with a man who isn’t a coworker or his accountant. Leave it to Don to screw it up.
Reefer – Megan notes that Don has tried marijuana before, but that he hasn’t had sex high. When? In season one’s “The Hobo Code,” he smokes out with Midge’s beatnik friends: “I feel like Dorothy. Everything just turned to color.”
The Wheel – Don’s vacation photos recall the last time he did a slide presentation: during the season one Carousel pitch to Kodak. He was cheating that time too. New wife, new pictures.
Dante’s Inferno – Don’s choice of beachside read bodes ill for his contentment, but if it helps land Pete Campbell in the ninth circle of hell (for weasel-faced treachery), we’re all in.
“You can stick a rag in her mouth and you won’t wake the boys.” – There are no words.