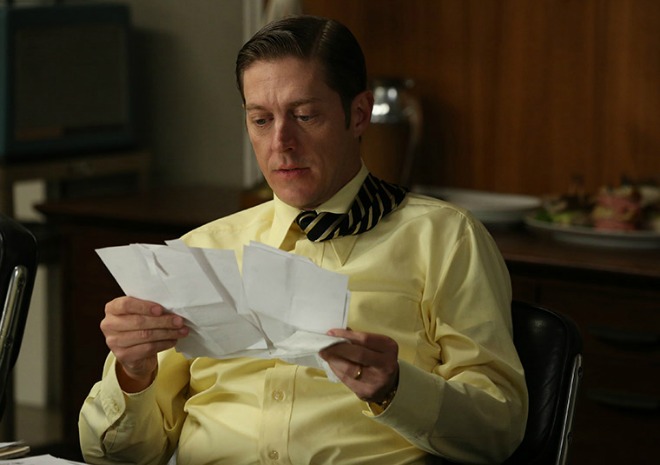 So, uh… Matt Weiner was doing some spring cleaning last week, found a script from season four, dusted it off and thought, “What the hell?”

That’s not entirely fair, but the sheer number of dead-and-buried relationships suddenly getting new traction in this episode had us sputtering at the TV. Joan and Roger? Betty and Don? Peggy and Don? “The Better Half” presented a lazy Susan of pairings inviting us to consider the stronger, abler partner. Let’s take them one at a time.

After the 50 Shades of Grey episode and the speed episode, this season has mostly ceased to surprise us. But even we didn’t expect the Don-Betty reunion or the surprisingly intimate pillow talk that followed. How glorious to see January Jones sporting a blonde bob and Daisy Dukes again! After enduring an interminable, fan-pandering stint as Fat Betty she has morphed into Campaign Trail Barbie with Henry’s bid for state senate. Betty was born to be desired and she’s never happier than when she’s a powerful man’s arm candy. Relishing her new body, she puts up not-very-convincing resistance to Henry’s suitor colleague at a fundraiser, a scene that recalls her first belly-caressing encounter with Henry himself. (Perhaps a detail that Henry also remembers and why he so aggressively demands the details of their conversation). Then enter Don, the father of her children, “that man.”

The most shocking revelation is not the fling itself—Don is disoriented after Sylvia and he always found Betty physically attractive—it’s how nakedly he seeks emotional connection. What’s Betty thinking? Does she feel guilty? “Why is sex the definition of being close to someone?” Don muses. “If we lied here in my arms I would have felt just as close.” The sex, it should come as no surprise to anyone, doesn’t mean that much to him. Otherwise Don occupies the traditionally feminine role in this scene, and it’s Betty who can enjoy Don’s typical no-strings-attached approach. She’s happy; she doesn’t want him back. She speaks with hard-won wisdom and compassion from the far end of a tunnel: Megan doesn’t understand that loving Don is the surest method to drive him away. When Don wakes up alone in Betty’s bed then finds his ex-wife and her husband enjoying breakfast in the canteen, he sees a woman who has adopted his own modus operandi: Be bad then go home and be good. He follows Betty’s example and returns to his better half, Megan.

Meanwhile, this episode featured cameos from five current or former Peggy paramours: Pete, Duck, Abe, Ted, and the ever-elusive Don. The hands-down winner for water cooler chat is Abe and his double stabbing, first at the hands of indeterminately ethnic subway hooligans then by Peggy herself. All Peggy’s long simmering resentments—that Abe doesn’t make any money, that he’s irresponsible, that he’s dragged her to a godforsaken corner of Manhattan (like a slave ship) to get rocks lobbed through their window when he can’t even protect her—crystallize in one glorious Freudian slip of the knife. Abe’s hospital stretcher breakup (“You’ll always be the enemy”) rehashes the same conflict that divided them at their first meeting, then created such electric chemistry later: He’s a communist, she’s a square, and never the twain shall meet.

Abe’s departure clears the way for Ted, whom (Freudian alert again!) Peggy is subconsciously hitting on in presentations. In true nice guy fashion, Ted has decided to take the high road and stick with his wife. Peggy is devastated—after her miserable night with Abe (and that hilarious use of the passive voice, “He was stabbed”), all she wants is to be taken into Ted’s arms, damn the repercussions. “He doesn’t know you,” Don taunts Peggy, and he’s right. There’s no evidence Peggy has told Ted about her illegitimate child, and it’s difficult to picture him receiving the news with Don’s stoicism. No matter what Peggy says, they’re not the same person even if both men occupy boss-lover-father territory in her mind. Ted’s determinedly professional boundary-setting, so out of place at the former SCDP, unmoors her just as Don’s door also slams in her face: After getting ping-ponged between Team Chaough and Team Draper, suddenly neither wants her. Will the reappearance of Duck Phillips herald another series of seedy hotel suite go-arounds? Will Stan get a third pass? Will Peggy finally invest in those cats her Catholic mother advised as an alternative to living in sin?

As for unspoken secrets, this episode delivered us back into Bob and Joan’s budding May-July romance. The question “Who is Bob Benson?” has tormented us all season. We might finally have our answer: a stand-up guy. Roger’s play date with his four year-old grandson sparks renewed but short-lived interest in his biological son, but his surprise drop-in visit to Joan’s apartment unsettles everyone—and not just because of Bob’s tailored tighty-whities. It’s clear that Roger and Joan have a past, that Bob and Joan have a future, but the lady isn’t talking. Yet Bob, rather than pump Joan for information or spill his suspicions to Pete, keeps to himself and even takes time to offer his idol the solution to his troubles: a competent nurse to look after Mrs. Campbell. Joan has a thing for man-boys but if anyone deserves a decent guy, it’s her. After kicking Roger to the curb (again), she may be the only character in this episode who believes—and acts—as though she’s found her better half.