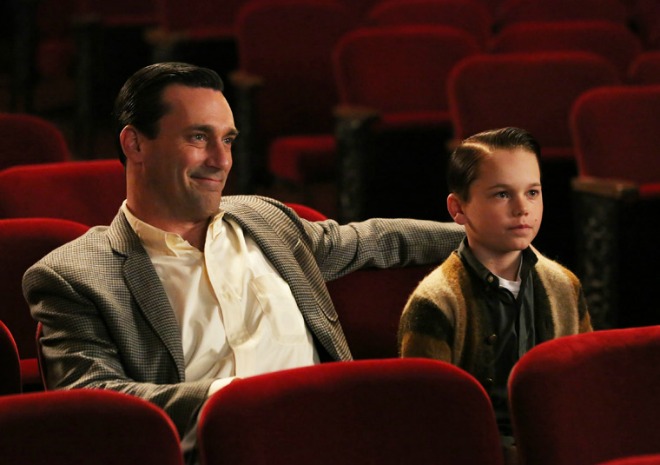 “In the flood the animals went two by two. You, you’re going to get on the ark with your father?”

In an episode that featured the worst disaster this season, the assassination of Martin Luther King, Jr. (soon to be followed by Bobby Kennedy’s death), Mad Men’s characters stayed afloat by pairing off—into some very odd couples.

Pete and Harry – We weren’t the only ones surprised that Trudy stuck to her guns. After she politely rebuffs Pete’s offer to play man of the house, he lashes out at Harry’s racism, shouting “Shameful! Shameful!” – the same word Trudy uses on the phone. Perhaps Pete is donning the cloak of high-mindedness when he’s really throwing a tantrum, but in the past he has proven surprisingly colorblind: In season three he pushed for Admiral to market their TVs directly to black consumers, and he looked pained during Roger’s tasteless blackface rendition of “My Old Kentucky Home.” Maybe we’re seeing genuine outrage.

Peggy and Abe – Poor Peggy. Every time she tries to do something for herself, she gets punished. While she loses the apartment to her agent’s misjudgment, she gets another payoff: The realization that Abe is thinking about kids, just in a more integrated neighborhood. Peggy looks delighted (does he even know about the baby she gave up for adoption?), but it’s hard to tell whether Abe will be around for the long haul: He’s preoccupied with work and Ted Chaough is angling for a seat at her table. The awkwardness of the awards dinner seating shuffle, when Ted accidentally takes Abe’s chair, combined with his excessive praise of Peggy and his subtle put-down of his wife, begs the question: Don made the same mistake twice. Will Peggy?

Ginsberg and Beverly – If we could award medals for the worst first date ever, Ginsberg would be in the running. His social-awkwardness-verging-on-Asperger’s returned in full force when confronted with lovely schoolteacher Beverly. But his compulsive confessions—namely, that he’s a virgin—were also disarming, direct, and completely charming. They can only go up from here.

Joan and Dawn – Compare Joan’s unsolicited side hug with Don’s secretary to Peggy’s sincere embrace with Phyllis. This episode featured a lot of white characters trying to figure out how to respond to a tragedy both universal and particular to the black community. Hint: This isn’t it.

Don and Bobby – Historical context aside, this episode was noteworthy if only for giving Bobby Draper more than two sequential lines, neither of which was “I love sweet potatoes.” We didn’t know what to make of the wallpaper plot (except possibly as an obscure metaphor for how the world fails to line up, even for the second youngest Draper). Don’s relationship with his middle child has always seemed like a missed opportunity, especially given the show’s focus on the nature of manhood. Bobby’s comment to the black movie usher that everyone likes the movies when they’re sad bespeaks a sensitivity and social perceptiveness beyond his years. The observation startles and impresses Don, who shows his affection by opening Bobby’s candy box. Later he obliquely replays the incident for Megan when he confesses that despite his best efforts, he never felt much for his children — until he did. This dialogue, once again dredging up his Dick Whitman childhood, struck us as a little too self-aware and on-the-nose for Don (and odd, considering his oft demonstrated affection for Sally). But with the child actor maturing, perhaps we’ll finally discover, like Don, who Bobby Draper is.