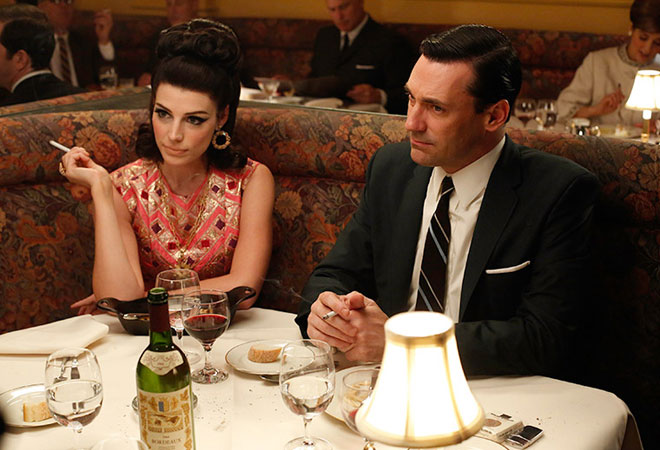 Let “To Have and To Hold” henceforth be known as Mad Men’s love-under-lock-and-key episode, or the one in which Don descends to his least tolerable this season. Is there anything grosser than Don lecturing Megan on whoring herself out for money, then dropping by to bang Sylvia? Don’s Madonna/whore complex, plenty evident last week, comes off even more hamfistedly this episode. With Megan back to her stylish, flirty self and her soap opera career heating up, it’s evident Don, previously wed to ice queen Betty, wants a wife he can keep in his pocket so he can run downstairs whenever the mood strikes him. (We wouldn’t put it past Don to screw Arleen the screenwriter’s wife just to spite Megan.)

Don’s pigishness was slightly offset (but only just) by Dawn. After fielding complaints for six seasons over the show’s Bermuda Triangle treatment of people of color (and after dropping storylines with elevator operator Hollis and the Drapers’ maid Carla) Mad Men is attempting to develop an arc for the show’s only black character. So Dawn wants a husband, she’s got integrity, and she’s shy. This is subverting historical stereotypes how, exactly? We’d rather see what they do with Peggy’s assertive assistant Phyllis, who seems to have already forged an intriguing mentorship where few dare to tread.

As for Peggy, she caved (albeit offscreen) to Ted Chaough’s machinations. There she was at the Heinz pitch, trading loyalty for advancement (did you notice how often allusions to loyalty came up this episode?). And then boom, there goes Stan, boom, there goes ketchup, and (not for long) boom, there goes Don—though we loved the look on his face when he heard Peggy plagiarize his “change the conversation” line. Her pitch was more conventional, less interesting than Don’s, but it was closer to what the client wanted, and it played on his fears. As a tactical strategy, even as a failure it was a success: Don was clearly unnerved. Instead, Peggy’s firm unwittingly drew Sterling Cooper Draper Price into an ill-advised gamble that lost them the unglamorous Heinz account they spent all last season sweating for: If you can’t win, at least undermine your opponent. (Unfortunately, Peggy’s own sour history with sauces and baked beans means she’s not likely to pick up that business any time soon.)

It was great to see Joan get some face time, but what was the point of the Scarlett storyline? It reeked of Joan firing Jane Siegel in season two, which was less interesting the second time around because we barely know Scarlett and she’s not going to hook up with Roger. It served as a pretext for Harry’s grudge, and as a mechanism to push Joan’s secret into the open. With Meredith, the idiot receptionist present during Harry’s tirade, there’s bound to be further humiliation for Joan as her indecent proposal is broadcast through watercooler chitchat. But how does Harry know about the hush-hush transaction?

Stan’s fringed jacket. Yes, thank you, this is what I wear when I go to work in my secret tinfoil bunker. We can’t recall a male fashion accessory more spectacular than this, unless it’s Pete’s rifle.

Don and Stan light up at work. Previously Don has confined his grass to beatnik parties in the Village and off-continent vacations. Now he gets high with the underlings.

Ken disses his father-in-law. “If he wants people to stop hating him, he should stop dropping napalm on children.” It’s gonna take more than a Joe Namath variety show to clean that one up.

Joan’s starter marriage. Girl talk with Kate at the soda fountain brings up Scotty—“the worst six months of my life,” says Joan. Another backward glance in an episode heavy with finger-wagging. Matt Weiner really, really wants us to think about this woman’s choices.

Harry’s botched throw-down. He should’ve listened to Ken. Harry tries to take a stand to defend Scarlet and just ends up confusing the partners. “It’s either me or her.” “Joan?” “Scarlet!” “I think you mean if she goes, I go,” corrects Bert. After a slimy last episode, kudos to Pete for his outrage when Harry alludes to Joan’s undercover activities. But where was Don’s season five chivalry? Could he be any more impotent?

The almost-orgy. For a few moments, we thought Megan might bumble into that one. Her swinger colleagues are up there with the Campbells’ skinny-dipping neighbors for teasing us with prospective wife-swapping. Basic cable series or no, eventually the free lovefest has got to happen.

Joan makes out to Serge Gainsbourg. Throughout her friend’s extramarital escapade, Joan looks like a weary chaperone at a high school dance. But for the first time since her brief reunion with Greg, she lets down her guard and enjoys an old fashioned, no-strings-attached makeout session. But Bonnie and Clyde? An ominous portent.

The missing ketchup. Don’s pitch was brilliant even by contemporary standards, but it shares an eerie similarity with his Sheraton clothes-on-the-beach pitch: In both cases, like Don, there’s no there there. The product is missing, and the clients aren’t buying it.

Life imitates art. The precoital pitch from Megan’s smarmy costar sounds an awful lot like what a talkier, less polished Don might spin out to a mistress: “I have a family that ignores me, but you make me feel new again.” Perhaps that’s why watching Megan pantomime infidelity disturbs him so deeply. “Were you gonna brush your teeth at least before you came home?” he demands. Who can forget that shot of Don rinsing out his mouth in the kitchen sink after a season two ride home with Bobbie Barrett?

Read All Our Season 6 Recaps
Season 6 Episode 3: “The Collaborators”
Season 6 Premiere (Episodes 1 and 2): “The Doorway”