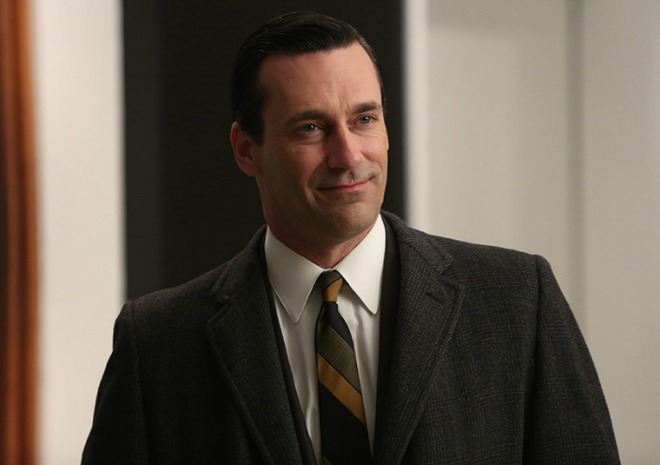 Can you keep it down? I’m trying to drink.

In a season that opened with the Inferno and spiraled toward a climax where anything seemed possible (including Megan’s sacrificial slaughter at the hands of the Manson Family) “In Care Of” provided an elegant, obvious, and necessary conclusion: Don hit rock bottom.

For six season now we’ve watched Donald Draper swig back Manhattans. After punching an evangelist and landing in the drunk tank, Don manages something none of us thought possible—he takes a fearless self-inventory, pulls himself up by his own bourbon-soaked bootstraps, and performs a decent, generous act for another human being. He starts to look an awful lot like someone going through the Twelve Steps. Someday, this man might see Paradiso. But not yet.

In the Mad Men-verse no good deed goes unpunished, and Don’s effort to help Ted save his marriage might cost him his own. His attempt at rigorous honesty gets him excused from the agency for an undetermined sabbatical. We won’t know how things shake out until next season, but Megan’s loss, though a heavy blow, would be a fair price to pay if it finally forces Don to follow the Hershey Principle (and the bedrock ethos of the Twelve Steps): Make your outside match your inside.

“In Care Of” followed the vein of earlier, lyrical season finales like “The Carousel,” relying less on deus ex machina plot twists than mining the deepest crevices of our characters. The episode captured our crew attempting what they’re typically bad at, struggling to do the honorable thing—for their kids, spouses, and lovers. Don and Ted are the yin and yang at its center; each man’s best impulse first arises from his worst.

In Don’s case, that Tarzanian instinct to seize whatever vine swings his way fixates him on Stan’s bid to helm the new satellite office. Then comes that awkward call to Sally and the reminder that his little girl is still livid about finding her father with his pants down. By the time Don makes it to the bar, he’s primed. He mimics his ersatz father figure, sending the smug minister flying just as Uncle Mac kicked the Bible thumper down the cathouse steps.

The morning after proves the turning point. “I’ve gotten out of control,” he tells Megan while emptying liquor bottles down the sink, before springing Stan’s readymade pitch on her: Move to California and become homesteaders. He’ll build something from the ground up. (That was Don’s stated purpose for launching the new agency all the way back in season three, but as Faye Miller observed, he only likes the beginning of things.) Megan’s tearful reaction testifies to just how miserable they’ve become, but the relocation is not to be. Don’s last trip to California was a disaster and he’s not getting a second chance. Eden has been lost, at least for Don.

Meanwhile Ted announces a stunning reversal of his decent-guy policy. He’s leaving his wife and he loves Peggy. She bats away the first suggestion—“I’m not that girl,” she declares—until he gets to the clincher. For Peggy, a traditionalist at heart, love is the ultimate aphrodisiac. She doesn’t want a scandal. She’s no Jane Siegel home wrecker, and Ted is also no Don Draper or even Roger Sterling, despite his insistence that they take a trip to Hawaii. The shot of Ted, post-Peggy, slipping into bed next to his wife, echoes not only the parallel embraces but the duplicity of Don in the series pilot, an apparent bachelor until he returns home to a family in Ossining. Only Ted is not capable of Don’s radical dissociation.

Ted’s request to take Don’s spot in California boils down to a plea to save his children—one that Don, having received news of Sally’s drunken acting out, can appreciate. We can’t recall a finer moment in Betty’s maternal history (or January Jones’ career on the show) than her plaintive assertion that in the battle for her daughter’s soul, “The good is not beating the bad.” Her call forces Don to take stock of the consequences of his actions and his responsibility to the partner he has baited all season: His daughter can’t afford for him to leave and Ted’s kids can’t afford for him not to.

The Hershey pitch that follows comprises one of the most remarkable and heartbreaking scenes in the saga of Dick Whitman. Having warmed up the Hershey execs with some feel-good blather about his childhood, Don glimpses Ted, backpedals, and outs himself. “I have to say this because I don’t know if I’ll ever see you again,” he begins. “I was an orphan.” Revealing that he earned those Hershey bars by fumbling through johns’ pockets for spare change, he utters what may be the saddest words in the history of the show: when Dick bought a chocolate bar, “I would eat it alone in my room with great ceremony, feeling like a normal kid.” Hershey’s is remarkable because of the simplicity and directness of its packaging: Unlike Don, the wrapper mirrors its contents. For the first time, Don displays for clients and colleagues the soul-flaying honesty we’ve only ever seen him reveal to strangers and mistresses.

For Don, it’s one step forward, two steps back. By episode’s end he has lost both the agency and Megan. With his huge stake in SC&P, he seems guaranteed to return, if in name only, unless the other partners can buy him out. With Megan, it’s less certain. Her scene with Don perfectly mirrors Peggy’s with Ted, where both women are left reeling from a decision in which they had no say. With Ted in California, it’s Peggy and Don, together again—although with Don momentarily out of the picture, Peggy makes herself comfortable in his office, sporting her first ever professional pantsuit. Pete, recovering from the mercenary and somehow hilarious overboard death of his mother at the hands of Manolo Colon (Pete has the rottenest luck with parents! He reminded us earlier this season that his father died in the season one American Airlines crash) heads off to California, presumably to support Ted. It’s unclear whether Bob’s Detroit stunt hints at deeper sociopathic tendencies (he does manage to dispose of Pete) or whether his horror at Manolo is meant to establish the limits of his behavior—he may be a sociopath but at least he’s not the kind that kills old ladies for money. With Don, Pete, Peggy, and Ted’s lives wiped clean, Weiner has cleared the decks for next season.

The most hopeful note comes from Don standing with Sally and his boys, gazing at the former brothel where he grew up to the strains of “Both Sides Now.” Don is trying to make amends. It’s too little but Sally’s sidelong glance suggests perhaps it’s not too late. In Don’s perpetual quest for self-renewal, he may finally be bridging the chasm between Don Draper and Dick Whitman. We still have one season left.