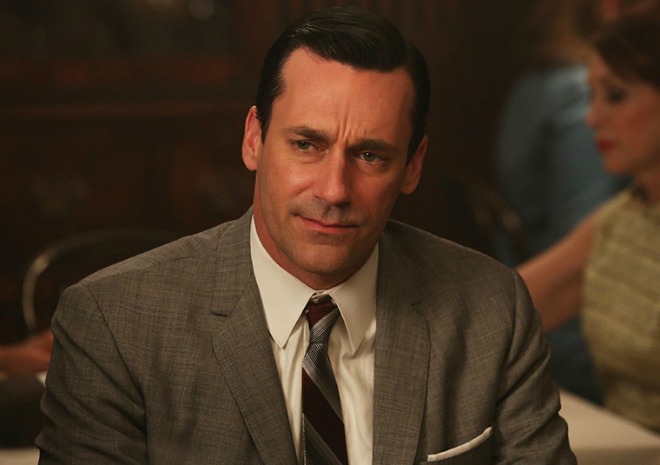 We take it back. If we worried earlier this season that Mad Men had outlived its usefulness—that maybe the wellspring of Matt Weiner’s genius for this particular story was tapped out and Don Draper’s heyday had bypassed us—we recant.

“Favors” did what Mad Men does best, hitting pay dirt after a methodical season-long buildup. If not quite on par with “The Suitcase,” the hands-down winner of Best Episode Ever, the show still equals, in quality and shock value, the late-stage installments from earlier seasons. In a series of exquisitely crafted pairings, we witness characters who plead, cajole, and beg, granting and denying favors, coupling in unexpected but revelatory ways. It also features some of the show’s strongest acting moments to date. Who can forget the shadow passing over Bob Benson’s face, or Sally’s on the other side of that door? But we get ahead of ourselves.

Poor Pete. We’ve all wanted to smack him at one time or another (and some, like the late Lane Pryce, actually have), but even he didn’t seem to deserve the truth-disguised-as-dementia soothsaying of his mother, who declares, “You were a sour little boy. And you’re a sour little man… You’ve always been unlovable.” Pete’s misguided attempt to defend his mother’s honor against what he believes to be the predatory nurse Manolo (procured on the special recommendation of one Bob Benson) elicits a brutal verbal slap. It’s not even clear anything untoward took place—Bob later hints that Manolo doesn’t swing that way. (And if it did, there’s a special irony given how Pete himself took advantage of that German au pair from season three, and Peggy in season one, and…) But hold your pity, folks, because just as Pete gets good and down on himself, here comes Bob with a stiff drink and an overly familiar tone.

We finally have our answer to why Bob Benson is always lurking about, and it’s the same reason Sally and her friend stay up late playing sleepover games. Bob Benson is a man in love. With Pete Campbell. Not a serial killer, not a government spy, not a mole from another agency or Joan’s white knight—just a degenerate. We’ll bypass sheer improbability for significance: How satisfying to see the show tackle LGBT issues again in a substantive way after Sal’s season three departure. Bob’s rejection lacks the sucker punch of Sal’s storyline, but we knew his secret all along. Instead Bob’s on-screen presence produces the same vague disquiet for viewers that he does for his coworkers. It’s an intriguing flip-flop that forces us to view him as an outsider and underscores how deeply in the closet he has to hide.

Mama Campbell meanwhile had a busy week, unnerving Peggy, aka Trudy, with pointed allusions to the child she shares with Pete, the first overt reference since Peggy’s “playgrounds” line in season four. No show does boozy, off-hours banter like Mad Men (remember Joan and Don flirting at the bar in “Christmas Waltz”?) and Peggy and Pete’s third-wheel dinner with Ted in White Plains was among the episode’s strongest scenes. Peggy brings out Pete’s best, those rare moments when he isn’t whining or BSing. We’ve long hoped that before the show wraps, Peggy crosses paths with her adopted child (now about Bobby Draper’s age), if only to glimpse the bittersweet shadow of what might have been. Weiner never lets us forget it, so perhaps there’s a chance—just like the still tantalizing chemistry between Peggy and Ted and Peggy and Stan, who uses his sexy voice when he answers her late-night booty call/extermination request. He’s not her boyfriend, but boy, could he be. Instead Peggy invests in a mouse-hunting tabby, and (perhaps) resigns herself to temporary celibacy: it seems she’s finally taken her mother’s advice to weather spinsterhood with a feline friend.

But enough of the subplots. The stars this week were Don and Sally, the latter of whom sees the last bulwark of her childhood crumble when she catches her father and Sylvia in flagrante. Sally is already sexually precocious for her age having observed Mrs. Calvet comforting Roger Sterling at the “Codfish Ball” last season. (And notice how her sleepover list of Mitchell’s assets tends toward the carnal while her friend waxes rhapsodic over his shirt.) Don showcases his best and worst, demonstrating a surprising capacity for empathy and level-headedness when the Rosens’ son gets fast-tracked for Vietnam: He doesn’t advise Arnold to help Mitchell flee the country observing to Megan, “He can’t spend his life on the run.” Instead Don does his best to work his power-of-suggestion magic, although his clumsy attempt to stir General Motors’ sympathies sparks a diatribe from an outraged Ted. (“Then be better at it!” could be the audience’s refrain to just about everything Don botches this season.)

It’s Don, who equates misery with sex, and it’s a short walk from a restaurant table with his friend to a bed with that same man’s wife. Linda Cardellini did some of her finest acting this episode—her tear-streaked face and mattress-thumping panic made us dread the inevitable moment when she’ll leave the show. But it doesn’t look like it’ll be on Sally’s watch. We thought Don would level with her; he never respected Betty, but he always seemed to cherish his daughter’s intelligence and candor. Instead, Don issues preposterous denials and a miserable, resigned Sally murmurs, “Okay.” Her last hero has fallen.

Will Sally angle for a bizarre Electra-complex revenge by pursuing Mitchell? Or will she huddle closer to Betty now that she’s finally mature enough to understand what her mother endured? Don’s lies have made Sally’s worst fear a reality: She has become her mother.