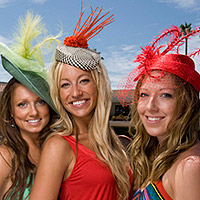 If you thought guests at the royal wedding wore the most bizarre hats imaginable, think again. Opening day at the Del Mar Turf Club looked like some sort of outlandish beauty pageant, one in which the upper-crust contestants were competing to win the prize for Most Garish. Innocent pillboxes, fedoras, fascinators, and floppy hats acted as blank canvases for enormous organza bows, towering plumes of feathers, freshly cut flowers, and even sculptures made from candy.  One of the winning hats featured yellow and blue butterflies that appeared to be taking flight from the wearer’s head.

Absurd hats have become such an institution at Del Mar that in 1995, the racetrack decided to capitalize on the trend. The One and Only Truly Fabulous Hats contest allows fashion plates to strut their crowning styles as they compete in five categories: Best Racing Theme, Funniest/Most Outrageous, Most Glamorous, Best Flowers, and Best Fascinator. First-place winners from each category are then entered into a grand prize judging.

This year’s extravaganza, which took place on July 18th, saw a record-breaking 47,339 spectators on the first day of Del Mar’s eight-week season. In true racing tradition, many of them cared more about the action off the track than the competition on it. Winning equines Midnight Crooner and My Best Brother got their kudos, but it’s the ladies in their gorgeous and goofy headwear who deserve an award for their bravery (if not their fashion sense).