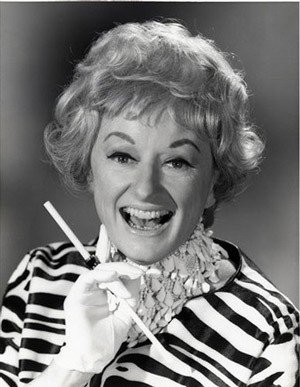 So my friend the Macho Show Queen is jetting out of town today but wanted to fill me in on his affairs, so to speak, these past two days. Sadly, he won’t be there for An Evening With Patti LuPone and Mandy Patinkin which opens tonight at the Ahmanson. Being an imaginary member of the “No kidding, Patti LuPone is your best friend, too?” club, I haven’t been so excited about a theatrical event since I saw actors show their junk in Oh, Calcutta! I’ll give Spyglass a full report on Patti and Mandy tomorrow. But you should see for yourself—buy some tickets, as I don’t use the term “once-in-a-lifetime” lightly (at least not the last five times I’ve used it, that is). Now, without further ado, MSQ reports:

What do Florence Henderson, Tippi Hedren, and Macho Show Queen all have in common? No, we aren’t the same age, but thanks for asking. Give up? Phyllis Diller!

Yes, there we were, MSQ and Hitchcock’s bird-bait and Carol Brady—and JoAnne Worley, for good measure—in the audience at the Magic Castle for An Evening With…Phyllis Diller. It was part of a new series that the Castle is hosting and Sunday night I (along with a posse of 14 guys who would make Vince on Entourage jealous) bathed in the glory that is the nearly 92-year-old comedienne famous for outrageous clothing, cigarette holder, and husband “Fang.”

The evening began with a display of Ms. Diller’s paintings—which are a bit more upbeat than Red Skelton’s frowning clown collection. I should stop right here as she prefers “Madame” to “Ms. Diller.” There must have been more than 30 of Madame’s paintings for sale along with various vintage records, posters, copies of her book and a headdress created for her by none other than Bob “I don’t just dress Liza” Mackie. I didn’t buy anything, but am hoping to get an invite to Madame’s house for her semi-regular art shows.

Once the lights dimmed, Madame took to the stage and immediately complained that the chair provided to her didn’t allow her to see anyone. Ms. Worley shouted out, as only she can, “How about a bar stool?” Minutes later, Madame was swiveling and letting jokes rip while answering questions ranging from her secret to longevity (a book called The Magic of Believing—appropriate given the location) to her experiences on Broadway in Hello, Dolly! (guess who asked that question) to her recent adventures filming a webisode.

It was here that Madame was at her most entertaining. She said, “I don’t know about all this new technology and stuff. I just show up and do what I’m told. Hell, I didn’t know about screwing either.” With the uproarious laughter of the audience, Madame called it a night and our 65 minutes in her company came to a too-brief end.

So that was Sunday. Come Monday, I was back at the Magic Castle for another event. Yes, they are doing much more than magic these days. In the same space where Madame held court, the team at the Magic Castle had set up “Cabaret at the Castle.” When I last attended, Ms. Carol Channing ate the stage. But last night was a thoroughly delightful evening with the very talented and funny Jason Graae.

While his name might not seem immediately familiar, he did originate the role of “Harry Houdini” in Ragtime (also appropriate given the venue). He also is the voice of the leprechaun for the Lucky Charms commercials.

Over the course of his 75-minute set, Mr. Graae delighted the likes of Amanda (“The Rose”) McBroom, Dean (“Footloose”) Pitchford, and Macho Show Queen (with a much smaller posse of one this time) to a slightly warped but always enjoyable selection of songs from the theater. His “Magic” medley was a great start.

At one point during the show he started a beautiful ballad in the wrong key. He stopped and started over but began making fun of his search for the right key. I immediately flashed on Lucille Ball in the “Operetta” episode of I Love Lucy wherein the chorus girls were cued to sing along with Lucy to “Queen of the Gypsies” since she could never find the right key. Pro that he is, Mr. Graae found his key quickly, but not without a lot of laughter.

He came back for an encore with a song written by Desperate Housewives creator Marc Cherry that was an homage to non-existent horror musicals. The songwriter changed lyrics to various familiar refrains to reflect the horror theme. I spoke to Mr. Cherry after the show and congratulated him on his David Merrick medley (though it wasn’t called that, Madame had made so many pointed comments about Merrick lacking a heart that I felt it was plausible that this was a continuation of that theme). We discussed our shared joy of discovering musicals vis-à-vis A Chorus Line on our 16th birthdays. We also discussed his passion for the work of Mr. Sondheim.

These “Evenings with…” and the “Cabaret at the Castle” series are going to grow in popularity. And of course, they’ll no doubt leave me with plenty of stories. If you’d like information on what’s coming up and how to get tickets to these intimate shows, call the Castle at 323-851-3313.