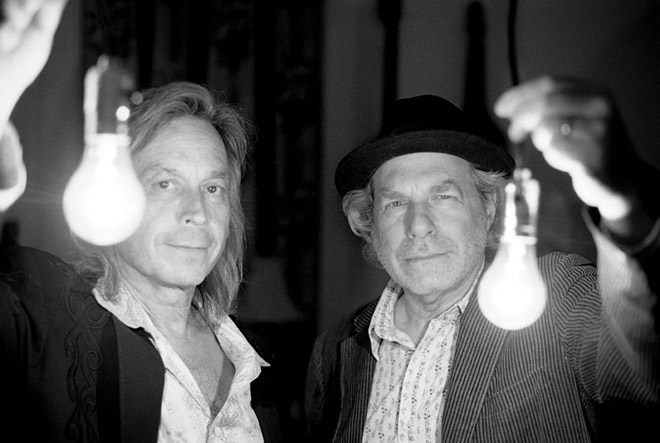 We hate Mondays, but yesterday was different. We got to have lunch with two incredible songwriters and guitar players, both of whom are celebrating new projects. Buddy Miller and Richard Thompson were featured in a midday performance at the Hotel Café, put on by New West Records and BMG Chrysalis.

Miller first came to our attention in the 1990’s as the guitar player in Emmylou Harris’ backing band, Spyboy. He’s produced and recorded with a who’s who of country and Americana artists: Linda Ronstadt, Steve Earle, Shawn Colvin, Patty Griffin, and Robert Plant’s Band of Joy, to name a few. Recently, he put out an album of duets called Buddy and Jim with his long time friend Jim Lauderdale.

Richard Thompson’s career stretches back to the late ‘60’s as a founding member of seminal British folk band Fairport Convention. Since then, he has pursued a diverse career with solo albums, collaborations, and songs that have been recorded by a multitude of artists. Highly praised for his intricate guitar techniques, he earned a Top 20 spot on Rolling Stone’s list of Best Guitarists of All Time.

The two talents came together for Thompson’s latest release, Electric, which was produced and recorded by Miller in his Nashville studio. It comes out on February 5th.

During yesterday’s lunchtime set, Miller hit the stage alone, sweet and self-deprecating in his rumpled blazer, signature fedora, and acoustic guitar, saying he would work out any sound issues before Thompson came on. He started with the roadhouse groove of  “Gasoline and Matches,” originally recorded with his wife Julie, and apologized because he’s not used to performing by himself. “Use your imagination a little bit and fill in the blanks,” he said in his gravelly voice to which fellow songwriter Syd Straw heckled, “I’d like to fill in your blanks.” He followed that with the beautiful “Don’t Tell Me” from his 2008 album The Best of the Hightone Years and “Wide River to Cross,” a recorded by Levon Helm for his Grammy Award-winning album Dirt Farmer. He played “Looking For a Heartache” then wrapped up the short set with a song by his wife, the haunting “All My Tears.”

Then Thompson, tall and lanky in black and his usual beret, joined Miller onstage for the song “Good Things Happen to Bad People,” and it was hard to believe the sound of acoustic guitars ringing out in the room was coming from just two guys—with Buddy grinning from ear to ear. Buddy took his leave and Richard played two more new ones, “Saving the Good Stuff For You,” a waltz for a new love about mistakes in past affairs, and “Stuck on The Treadmill,” a more frantic testament to surviving life, complete with his aggressive guitar work. “What a way to spend your lunch hour, eh?” Thompson laughed, before launching into two classics, the poignant “Persuasion,” which he wrote with Tim Finn, and perhaps his most beloved storytelling song, “1952 Vincent Black Lightning.” He wrapped up the set with “The Snow Goose,” a melancholy tune from his new album.

We lingered and chatted with the artists trying to make the magic last; eventually we had to step out into the light and face the real world. But at least after seeing such artistry, “out to lunch” had a new meaning and our Monday was infinitely better.