Home L.A. History ‘L.A. Confidential’ Is Screening Inside One of Its Most Iconic Locations 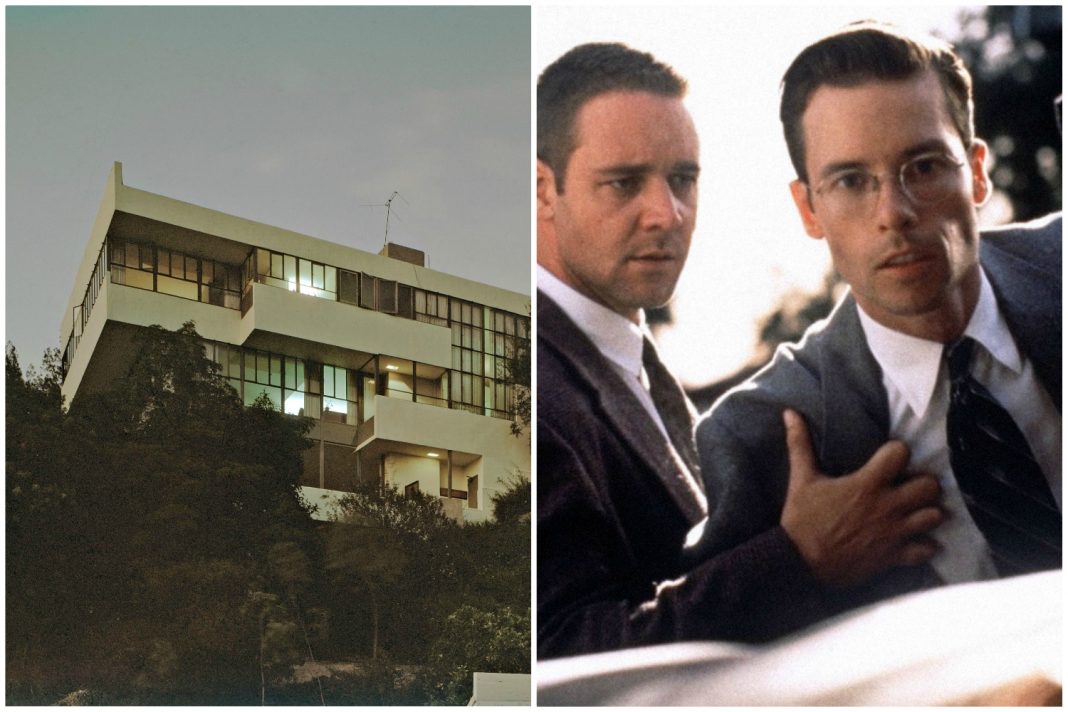 This Friday night, a small L.A. audience will have a rare chance to enter the noir world of L.A. Confidential with a special benefit screening at one of the 1997 Academy Award-winning film’s most memorable locations, the home of mustachioed pornographer Pierce Patchett (played by David Strathairn) in the hills of Los Feliz.

The Lovell Health House, an iconic International style home designed by architect Richard Neutra in 1929 for Dr. Philip Lovell, has been lived in by the Topper family for the last 59 years. In the film, the house is presented impeccably as a bright-white machine for living. But since the film wrapped, the paint has faded and begun to peel. The pool is empty and dry.

That swimming pool and its integrated sun decks are integral to the design of the house, which was originally created for Lovell, a fitness enthusiast, and doctor of naturopathy, who wrote a column on healthy living in the Los Angeles Times. Lovell believed in the restorative power of California outdoor living and asked Neutra to create the ultimate natural power pad, with porches for open-air sleeping, an al fresco gymnasium, and big windows to supercharge him with sunshine.

Friday’s sunset tour before the screening will feature wine and appetizers (Dr. Lovell was a strict vegetarian) and benefit Lovell Health House, LLC. The future of the house is unclear. Architect Dion Neutra, son of the original designer, reports that family matriarch Betty Topper passed away last month, and KCRW hints that the house might soon be for sale.

“We’re always open,” her son Ken Topper told the station’s Frances Anderton. “To someone knocking on the door.”

Friday’s screening might be one of your last chances to see the home the way god, Neutra, and Dr. Lovell intended. Just don’t be as aggressive with the front door as Kevin Spacey and Guy Pearce were in the movie.

RELATED: A Guide to the 100 Stunning Architectural Gems of L.A.