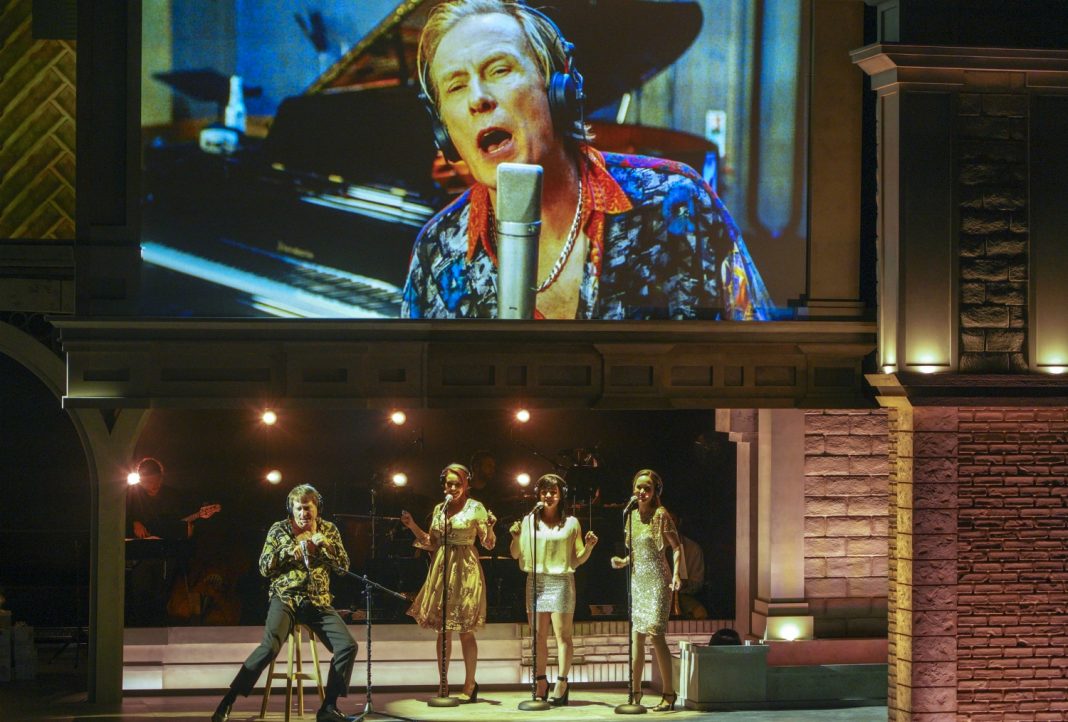 Love Actually Live has returned to the Wallis for 2019; it runs through Dec. 29. Info here.

Last Saturday afternoon I indulged in a guilty pleasure. Until now, I’ve only admitted this secret liaison to one person. But hey, it’s Christmas! And at Christmas—at least according to Love Actually screenwriter Richard Curtis—you tell the truth.

So here’s my truth (you’ll have to imagine it spelled out in black Sharpie on white poster board): I went to see Love Actually Live, and I didn’t hate it.

To be clear, like Love Actually the movie, Love Actually Live—which runs at the Wallis Annenberg Center for the Performing Arts through the end of the month—is not good. As Lindy West and Christopher Orr pointed out so articulately in 2013, on the occasion of the movie’s tenth anniversary, the film is unromantic and highly problematic. In addition to implausible plotlines, it features repetitive, unnecessary shaming of women’s bodies, and enough blatant sexism and misogyny to fill Santa’s sleigh with sexual harassment lawsuits.

It hasn’t aged well over the last five years, either. In the era of #MeToo, the movie’s multiple workplace “romances” feel even sleazier and more cringe-inducing than they did in 2013.

All these problems and more also appear in For the Record’s live rendition of the tale, the plot of which makes even less sense in chopped-up version (the couple seated next to me last Saturday had never seen the movie and seemed completely lost).

The word “live” here is a bit of a misnomer. Like For the Record’s other movie/musical productions, this is less a live theatrical rendition of the movie and more an enhanced movie screening with live performances of songs from the soundtrack interspersed. Over a long two hours and 40 minutes, the show slogs through almost the entire soundtrack with one notable exception: The movie’s climax is set to Mariah Carey’s “All I Want for Christmas Is You,” but the show’s producers were apparently unable to secure licensing for that song, so the scene is accompanied by a far less satisfying original number.

For most of Love Actually Live, selected scenes from the film play on large screens above while actors mime them below and sing. None of the actors has lines, which I found odd at first for something billed as live theater, but it turned out to be a positive. After all, I don’t really want to hear some young actor performing Alan Rickman’s lines. I want to hear Alan Rickman perform them in his iconic, slurry drawl, and that’s exactly what you get here.

At intermission I had a decision to make. Like Emma Thompson I wondered, “Should I stay, knowing my life would always be a little bit worse,” (because I compromised my feminist and aesthetic values), “or should I cut and run?”

I decided to order a coffee with a shot of whiskey in it and see this thing through to its sexist, candy-cane-striped saccharine end. All week I’ve asked myself why I went to this show and why I stayed. I’m an opera snob and I generally despise musicals! I’m a feminist and this movie denies its female characters dialogue and personalities, and treats them as little more than sex objects! Why am I still so drawn to this ridiculous piece of holiday rubbish?

After some soul-searching I’ve come to this conclusion: Nostalgia and good music are powerful forces.

In 2003 when Love Actually came out in theaters, I was a 20-year-old college sophomore, and I fucking loved this movie.

Of course, I did! Screenwriter Richard Curtis primed me for it; in high school, through his earlier films Notting Hill and Bridget Jones’s Diary, Curtis taught me to crush hard on shy, stammering, middle-aged Brits Hugh Grant and Colin Firth. A child of the ’80s and ’90s, I was also well versed in the rules of RomCom 101. This is fantasyland, not reality. Don’t ask questions or expect female characters to have agency or personality. Just lust after the male lead and fantasize about first kisses that are both the climax and culmination of the plot and definitely equal forever love.

My college roommate was a Love Actually fan, too. Every December the movie and its soundtrack played on repeat in our dorm room as we studied for exams and packed up for Christmas break. We cracked each other up with ridiculous impressions of Bill Nighy as Billy Mack (the movie’s best and most iconic performance). When we were frustrated with school or boys, we’d emphatically declare with a high-pitched voice and a posh British accent, “I hate Uncle Jamie!”

These little quips and weird quotable moments—like Grant dancing to the Pointer Sisters or Mr. Bean gift-wrapping a necklace in the “flashiest of flashes”—represent the redeemable parts of Love Actually. They are also, I believe, the primary reason it became a seasonal cult classic. For a subset of early ’80s babies like myself, this was our Christmas movie and these were our quotes. “There was more than one lobster present at the birth of Jesus?” Duh!

It helps that the soundtrack is also great and can be enjoyed without compromise. There’s peak early aughts Kelly Clarkson belting out “The Trouble With Love Is.” There’s Dido providing the perfect soundtrack to pre-Walking Dead thirst trap Andrew Lincoln’s misdirected angst. And there’s Joni Mitchell’s “Both Sides Now,” evocatively accompanying a heart-wrenching performance by Emma Thompson. I was, and am, here for all of it. It is the reason Wyclef Jean’s “Take Me as I Am” will forever be one of my favorite “Christmas” songs. For that, and for every one of its Bill Nighy scenes, I’m truly grateful for this piece-of-shit movie.

And I’m not alone. After Love Actually Live’s first week, the Wallis reported record-breaking sales. This movie has its hooks in our collective culture and isn’t likely to let go anytime soon.

After the show, I texted my college roommate a picture of the Love Actually Live set.

“We just watched it last night!” she texted back, launching a much needed cross-country catch-up session via text.

We all have to decide for ourselves what problematic art we’ll continue to indulge in and what we can no longer stomach. This movie and this show have serious issues, but they are also great. So I’m keeping the music, the memes, and, most of all, the memories. I guess you could say I love/hate it, actually.

RELATED: Night on Broadway Is Off for 2019. Could This Monthly Series Fill the Void?