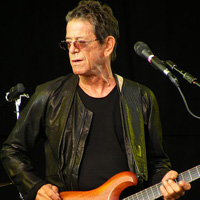 Lou Reed, who died yesterday at age 71, was a supreme songwriter, storyteller, and scourge of music journalists (just read Lester Bangs or listen to Reed’s between-song harangues on his 1978 album Take No Prisoners). He imbued rock music with gravity, menace, and insolence. Reed sang about discovery, whether he was finding a reason or rushing on a run and feeling just like Jesus’ son or turning on the radio and being saved by rock and roll. These appeals took his listeners—musicians, artists, a certain dissident Czech playwright, and countless estranged urban denizens—to places where they sought their own voices.

Some have argued that Reed’s work brought the street and the literary avant-garde together, but it was more the fact that he innately understood what the two realms had in common. For Reed, it was about recognizing the humanity that resided within the strangeness, acknowledging that even in dreams there were responsibilities. Growing up, Reed listened to doo-wop even as he immersed himself in the stories of outsiders in books by Nelson Algren, Hubert Selby Jr., and John Rechy. He studied and drank at Syracuse with poet and short story writer Delmore Schwartz, to whom he would dedicate the song “European Son” and sing to in “My House” on The Blue Mask. Reed’s next mentor would be Andy Warhol, who would produce the Velvet Underground and to whom Reed later paid tribute on the stirring 1990 album that reunited him with his Velvet Underground compatriot John Cale, Songs for Drella.

If Reed had done nothing but the first four albums with the Velvet Underground, that would have been more than enough for inclusion into the rock ‘n’ roll pantheon.

At certain moments in the ‘70s and ‘80s, it was customary (again see Lester Bangs) to hold Lou personally responsible for every venal impulse in rock and roll and the burgeoning punk scene. In the midst of all this, Reed kept pushing and exploring. For all the songs that would make him a demigod of the New York City demimonde, Reed’s discography is replete with albums no one wanted him to make or to release. The bleak Fassbinderian family melodrama of Berlin was an unexpected and for some unwelcome listen after Transformer and “Walk on the Wild Side.” Now, the 1973 album has been proclaimed a masterpiece. What reevalutions lie in store for the 1979 Albert Ayler-inspired The Bells, his 1997 H.G. Wells musical Time Rocker, or the 2003 Reed-meets-Edgar Allan Poe double-album The Raven? Even the truly maddest of his releases, the infamous guitar feedback opus Metal Machine Music, often listed as one of the worst records of all time and the ultimate obliteration-of-contract album, has found its acolytes. Reed lived long enough to hear and see Metal Machine Music’s proto-industrial susurrus performed live by chamber ensembles.

Over the last four decades, Reed reinvented himself as a performer, collaborator, poet, gearhead and guitar-tuning aficionado, shiller of Honda Scooters and flip-up Lou’s Views sunglasses (the ones he sports in the film Blue in the Face), tai chi enthusiast, and husband to musician Laurie Anderson. Those who want an introduction to or a reminder of all of Reed’s many facets and faces are directed to Timothy Greenfield-Sanders’s 1998 American Masters documentary Lou Reed: Rock and Roll Heart. Reed talked about how his albums taken together could be imagined as an aural version of a Great American Novel. Street Hassle, Coney Island Baby, New York, and Set The Twilight Reeling could also be examined as urban theory and sociology alongside, say, Jane Jacobs’s The Death and Life of Great American Cities or Rem Koolhaas’s Delirious New York, both titles which would not have been at all out of place on a Lou Reed album.

His Animal Serenade captures a concert at the Wiltern in 2003 but the last time I saw Lou Reed perform in L.A. in 2008, he played none of his hits, not even any of his songs, and he was not hurling insults at the audience like a wounded or captive rock ‘n’ roll animal. There were no words at all. He was at REDCAT, dueting with guitarist Ulrich Krieger, the composer and CalArts professor who had transcribed Metal Machine Music for ensemble performance. He only occasionally peered up from his instrument, regarding us in the audience as though we had crashed his rehearsal space. He looked at us with an expression that mingled annoyance, wonder, and pleasure, that Lou Reed visage forever caught somewhere between a scowl, a smirk, and a smile.