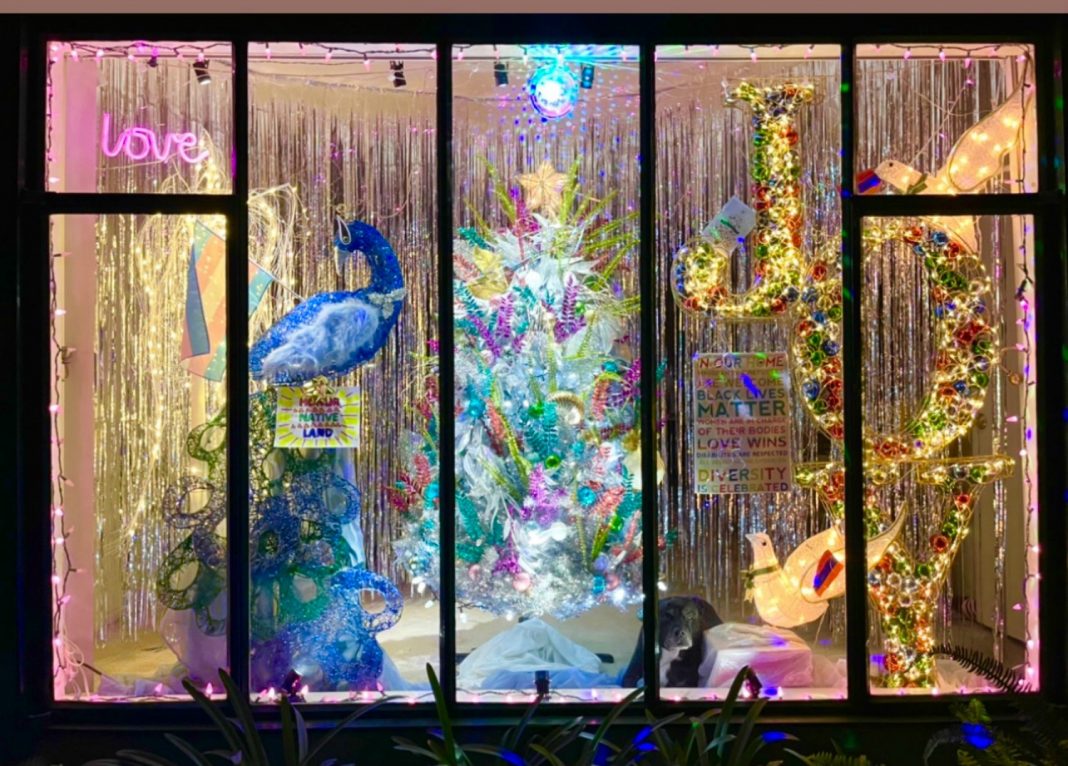 On Black Friday, my little L.A. neighborhood had a big night: our neighbor, Joël Perez, lit his 2020 Christmas window display. Perez’s window is always a spectacle, but this year, in the midst of a pandemic that has confined us to our homes, it felt like an event. Neighbors masked up, socialized from a distance, and basked in the glow of a sparkly, rotating Christmas tree and dancing disco lights.

Perez’s apartment features floor-to-ceiling windows that face Los Feliz Boulevard between Griffith Park Boulevard and Riverside Drive. A self-described “atheist who loves Christmas,” Perez goes all out each December, using lawn ornaments and lights to transform his living room into a big, gay, street-facing Christmas display. Last year’s edition included a giant pink unicorn, chandeliers, and a pink feather tree. This year there’s a glittery blue peacock and pink neon. Sit in traffic on the northwest bound side of Los Feliz Boulevard after dark in December and you can’t miss it.

Shortly after Perez lit his tree this year, a Nextdoor.com post popped up with comments from neighbors who love the display. One person from Los Feliz Knolls said that last year, as she sat in traffic, she got so distracted checking out his decorations that she rear-ended the car in front of her (“just a slight tap, no dents”). The general sentiment among posters was gratitude, with most conveying some version of, “Thank you—we needed this bit of joy this year more than ever.”

Perez, 38, is from Fresno, California. The son of immigrants from Mexico, he works at the California Endowment as a healthy communities project coordinator. But to me, Perez has always just been Joël, my nice neighbor of five years, Christmas-window decorator extraordinaire, and dedicated dog dad (father of three).

Every day when I walk my dog, I pass Joël making two round trips to our neighborhood park, one with his big dogs—a 9-year-old pit bull named Sebastien and a 10-year-old German shepherd named Luna—and a second shorter, slower one with Titus, his 16-year-old terrier mix. My favorite thing about the pit bull, Sebastien, is the way he sits in Joël’s window with his chin on the ledge. At Christmas there’s no stopping him, so he regularly inserts himself into the display.

Joël’s decorations get more elaborate every year and there’s always a theme. One year a sleigh and reindeer soared across his living room, another year glittering birchwood hung from the ceiling creating a woodsy winter wonderland. Last year’s display—the one with the pink unicorn and feather tree—was my personal favorite.

This year’s window has a message. On the left side, a neon pink sign that reads “love” in cursive dangles above a sparkling blue peacock lawn ornament adorned with a pink, white, and blue trans pride flag. In the center, a white Christmas tree dazzles and twirls between doves holding Armenian flags in their beaks in support of our local Armenian community and the ongoing crisis in the Nagorno-Karabakh region. On the right, another lawn ornament spells out JOY. A handmade sign reads “Honor Native Lands,” and another sign states in all-caps that “In our home immigrants and refugees are welcome, Black lives matter, women are in charge of their bodies, love wins, disabilities are respected, all religions are embraced, and diversity is celebrated.”

This year, instead of “coming home” we are just “at home.” All the time. The pandemic has shrunken down our big-city lives to simpler, smaller, neighborhood ones. In the past, Joël’s window has been something I see on my way to and from work and social events, but this year, stuck at home because of the pandemic, I’ve observed it more closely.

I’ve also gotten to know my neighbor this year because of the window. When I asked Joël about his display for this story, I learned that his decorations are deeply personal.

Growing up in Fresno, Joël tells me that his big Latino family went all out for Christmas. “The decorating part, I get that from my mom. It’s what she does for Christmas,” he says.

But while Joël grew up loving Christmas, Christmas didn’t always love him back.

As devout Seventh-day Adventists, Joël’s mom and sisters have never accepted his sexual orientation. His father was a machismo Mexican man. Being gay wasn’t an option for Joël, his family told him. “They follow their religion by the prescription given to them by their pastor. Religion just suffocates my family,” he says.

And so, over the years, as Joël learned to embrace his identity as a gay man and find peace within, big holiday family gatherings increasingly became a source of anxiety more than joy. Instead of looking forward to going home for Christmas, he plotted ways to escape family gatherings quickly before he was peppered with questions about why he didn’t have a girlfriend.

Joël moved into his place on Los Feliz Boulevard in 2011, but he didn’t put up a tree that year, or the next. In 2013, he made a decision. He might be a gay atheist who experiences anxiety surrounding the holidays, but he still deserved decorations.

“Christmas always made me feel anxious and sad and lonely,” he says. “But that year I decided I was going to embrace it balls to the wall. I just said, ‘I’m not going to be scared of it anymore because I actually love Christmas,’ so that’s when I got into the display.”

That year Joël put up a dazzling gold-and-red flocked tree and placed it in the middle of his big, open windows. Neighbors told him they loved it, and he loved it too.

“Christmas always made me feel anxious and sad and lonely. But in 2013, I decided I was going to embrace it balls to the wall.”

“The next year I got more creative with the colors, and then it just started to build. I saw how people responded and that felt good. I remember someone told me it brightened their day and someone else even thanked me for it. I saw how it brought people together. So I started saving more and shopping for deals right after Christmas.”

People who live on or near our little stretch of Los Feliz Boulevard have come to anticipate Joël’s big displays, so every year around October he starts getting questions like “When are the lights going up?” and “What’s this year’s theme?”

The first time someone asked him about his window this year, Joël responded, “Yes, they’ll go up in November.”

“But that was a lie. Actually this year was a little difficult for me,” he says. “I thought I’d take a year off from decorating, I just didn’t feel like it, I wasn’t in the mood.”

Like so many others, Joël lost someone close to him this year. Back in May, his mentor at work, Beatriz Solis (Los Angeles County Supervisor Hilda Solis’s sister), died from cancer.

A decade ago Solis had changed Joël’s life. She believed in him, told him he was smart and strong, and helped him believe in himself when he was in a tough place in life. She also advocated for him to get a job in L.A.

“Bea literally plucked me from Fresno and brought me to L.A., she got me into community organizing and then into communications. If you get that one person that believes in you, then you start believing in yourself and the world’s amazing,” he says.

After losing his mentor in the midst of a raging global pandemic, Joël fell into a depression. He worked with a therapist and started taking antidepressants for the first time, but it’d been a tough year and he still didn’t feel much like decorating.

Then another neighbor said something that changed his mind. She asked him about his Christmas decorations and added an aside, “I hope you don’t make them too political.”

In that moment, Joël decided to go bigger than ever with his decorations—and use them to say something, too.

“When I think about Bea, I think about how she led love into justice,” he says of his mentor. “So then I thought, ‘OK, what messages can I bring in?’ I’m looking forward to having a new administration, but we can’t forget there’s still a lot of issues going on that need to be addressed.”

Joël’s window makes countless people happy as they sit in traffic or pass by on their dog walks, but there’s more to it than that. The peacock is an homage to his mentor, Bea, who lived in South Pasadena where wild peacocks roam. And the neon “love” sign and JOY ornament speak to her life’s values.

“What I really want people to come away with,” he tells me, “is that we still live in a time when we can be joyful and show that we still love each other. It’s also a way to remember that we can show up for other people, and keep showing up for them. And it’s important for me, too, to just be really, really gay however I can. I’m proud of it, and I want to share that with the world as much as I can.”

RELATED: Where to Go Gazing at Christmas Lights in L.A.