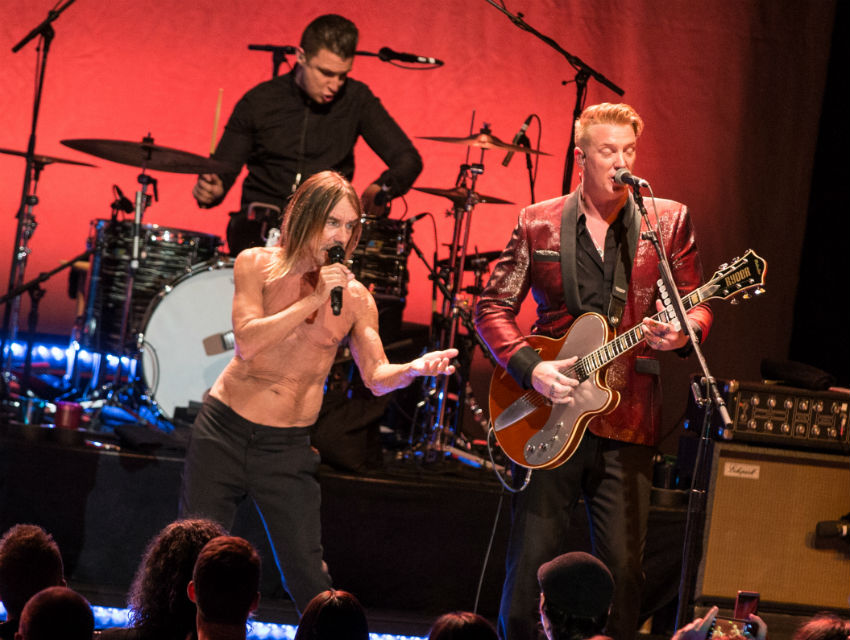 Amid chatter that this could be his last tour, Iggy Pop took the stage at the Greek Theatre to showcase Post Pop Depression, a collaboration with Josh Homme and Dean Fertita of Queens of the Stone Age and Matt Helders of Arctic Monkeys. Pop told Beats 1’s Matt Wilkinson that he could be “closin’ up” after this record. “To really make a real album,” he says, “you really have to put everything into it. The energy’s more limited now. I may be surprised.”

It’s called Post Pop Depression, after all, and it certainly has its introspective moments. In the context of a 50-year, up-and-down career, his words are understandable, but his actions don’t jive. On stage, Pop is a vibrant performer still capable of thrilling a crowd without turning into a caricature of himself.

Bolting on stage at the Greek like he was fleeing the scene of a crime, Pop set the bar high when he opened with “Lust for Life,” and he never flagged. In a time where too many of music’s brightest lights have flickered out, Pop blazed through a two-hour set in all his crazy-eyed glory, banking just as heavily on his stellar, Bowie-produced albums Lust for Life and The Idiot as he did his new Post Pop material.

“I’ll find a way to get up there,” he said to the crowd at the top of the amphitheater. By this point, he’d ditched his jacket and engaged in some light crowd surfing down front. “Oh, yes I will. Because I’m a gnarly motherfucker.” If we’re headed for a post-Pop world, it’d be too soon. But how often do the retirement rumors hold water? Let’s be honest, or at least hopeful—here are a few reasons Iggy Pop shouldn’t retire just yet, and why you should make it a point to snag a ticket if there’s a next time in Los Angeles.

He’s still a phenomenal performer
No one is more comfortable in his own skin than Iggy Pop. The famously shirtless punk icon turns heads even at 69. Sure, he may have weathered, but the way he pours every ounce of himself into his unpredictable and raucous performance over two hours shows he’s anything but withered.

He’s a punk institution
Pop has influenced generations of artists from The Pixies to Nirvana, but if it weren’t for the late David Bowie, Pop may not have survived the ’70s. Pop told The New York Times recently about how Bowie resurrected him from “personal annihilation.” He channels the sound of the Bowie years—and nods to their legacy—on Post Pop in “German Days.”

He’s writing some of his best work
Iggy has been a force of nature since his work with the legendary Stooges in the ’60s and ’70s. Post Pop Depression is a tortuous reflection on Pop’s five decades of ashes and artistry, and the burden of carrying one’s legacy on weakening shoulders. “This hasn’t been an easy life. I’m hoping for American Valhalla,” Pop croons on “American Valhalla.” For the man who at once only wanted to be your dog, PPD reveals the man whose bark is now as important as his bite.

A Heart Full of Napalm