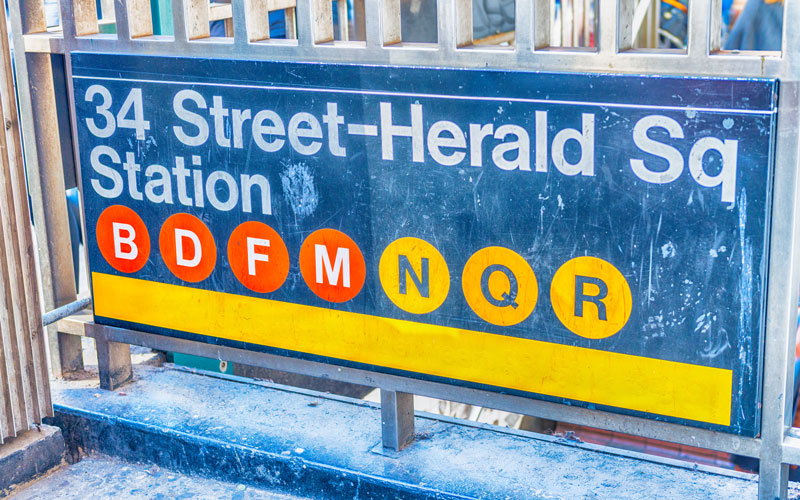 Welcome to the Los Angeles Subway Tour of New York City, the East Coast franchise of the The New York City Walking Tour of Los Angeles! There is only one way to see New York City, and that’s by subway. Oh, sure, you can get around the Big Apple by cab, or in a private car, or you can take the ferry to wherever the ferry goes, but if you want a real New York experience, the subway is the place to be.

Your adventure in New York City begins at home, which in your case is a friend’s $1.1 million 587-square foot apartment with a stunning view of a trash-heaped alley visible only by gingerly standing on the “balcony”, which is an 89% rotted-through six-inch-wide fire escape.

We advise that you dress as if you’re going to experience up to four distinct weather systems in one day. Because you will. So pull on those knee socks, put on some jeans, lace up your boots, don a thermal undershirt, a light T, a thin cardigan, wrap a scarf four times around your neck, zip up that parka, pull on that woolen hat, tug on those gloves, charge your phone, load up on KIND bars, and get all of your legal affairs in order. You’re going outside.

New York’s stairwells are filled with criminals and dice games, so it’s recommended that you take the elevator down to the lobby. Budget about 25-30 minutes for this, as New York City elevators are nonexistent. Should an elevator miraculously appear, wedge your way into it no matter how full of people it seems. Don’t take it personally when someone shouts, “Go screw!” That’s just some good-natured ribbing from the locals. You’re being razzed. Grab your groin and shout, “Your mother.” This is a city in which you can’t display any signs of weakness. The only character trait New Yorkers respect is irrationally smug confidence. When the elevator reaches the lobby, make an orderly departure by calmly and firmly shoving everyone the hell out of your way.

Once you’re outside, take a moment for yourself. Stop and breathe it in. What’s that smell? Is that … a smoldering urine barge? No, no. That’s New York, friend. New York, in all her glory. Don’t dally too long. At negative 48 degrees, with 60 mph winds, hypothermia can set in within minutes. Walk briskly, but not too briskly. Even a slight sweat can be enough to freeze the skin off your body. Lucky for you, New York’s colorful characters will keep you so amused you’ll forget about the risk of frostbite. Is that a pants-less clown yelling at a fire hydrant? Oh, New York, you beautiful manic pixie dream girl, you.

Your body will begin to warm again as you descend into the 34th Street- Herald Square station just like Luke Skywalker’s body warmed when Han Solo saved his life by stuffing him into that dead tauntaun. Head to the F platform, where your chariot awaits. Actually, you will have to wait for your chariot, which will be delayed because there are problems down the line. If you want to pass the time like the locals do – and that’s why you’re here, for authentic New York experiences – you can eyeball everyone on the platform and try to figure out which one of your fellow travelers is most likely to shove you onto the tracks. When you spot that person, slowly shuffle your feet sideways and away. For added comfort, feel free to wrap your arms around a post. It feels silly, but it’s a local custom, and you don’t want to offend.

You will soon notice that it’s hot down here, and you’re starting to sweat violently. Maybe you’re feeling a bit lightheaded. That could be any number of things – gas leaks, decades of accumulated rodent defecation, drug smoke or, most likely, dehydration. Are you seeing things? Is that Hermione Granger hiding books on a train platform? Doesn’t she have a personal assistant who can do that? Isn’t any book that gets left on a subway platform destined to become toilet paper? Stay focused. Drink water. Keep your wits. You’ve got a train to catch.

All aboard! You’re on the subway. Great. I’m just a tour recording, and I’m not actually there, but I know for a fact there are no seats available, so you will have to hold onto a sticky pole and continue to stand. This is your chance to meet real New Yorkers. Oh, here’s one of them now, putting his giant, filthy hand on top of yours. He’s smiling at you, but only with his lips, not with his eyes. You’ll want to apologize to him, like his violation of your personal space was somehow your fault, but DO NOT DO THAT. No weakness. Calmly explain to him, “I will cut you.” He’ll appreciate your forthright communication style and move onto a weaker member of the herd.

Oh. Oh, no. Why did the train stop? Is someone going to make an announcement? Who’s touching me? Is it getting warmer in here? What’s that drip? Is the heat from the crushing mass of humanity on this train causing condensation to form on the ceiling and rain sweaty train grime down on my face? These are normal questions to ask whenever one of New York’s famously unreliable subways stops inexplicably in a dark, rat-filled tunnel. Again, don’t show weakness. If you think someone is getting too close to you, start shouting craziness. “I live in Joe Biden’s mailbox! The pope shaves his legs with salad dressing!” That sort of thing. In general, on a New York City subway, you want to be the person strangers are backing away from.

It is at this point everyone on the train will break into an a cappella version of “The Room Where it Happens” from the hit musical Hamilton. Smile. You’re in the middle of a prank improv scene being recorded on someone’s iPhone. This moment is actually really life-affirming and beautiful and for a moment you’re reminded that we’re capable of boundless joy and unexpected human connectedness in the dankest corners of our slow trudge towards death.

You should exit at your earliest opportunity. It doesn’t matter which stop you choose because when you reach the top of the stairs you will be so bleary-eyed and confused from being hurtled through the core of the earth that you will walk the wrong way. The wind is now blowing in every direction. You can no longer tell if it’s night or day. The sweat on your skin has turned to ice, and you will require medical attention.

Congratulations! You’ve reached the end of your subway tour of New York City. It really is the greatest city in the world.