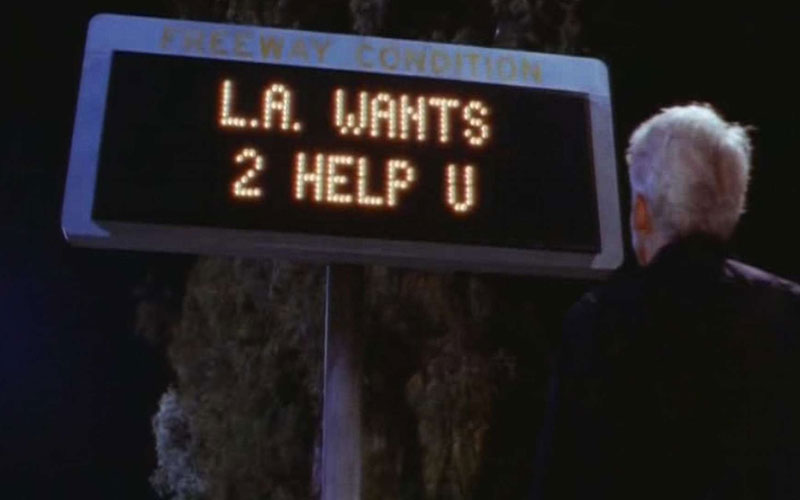 Whether you were born in Los Angeles or you moved here from one of our nation’s many rectangular-ish states, this city changes you. The evolution generally takes place over a series of moments—small, usually—the kind you notice and then forget five minutes later because life moves fast. Like, the first time you go to a movie here and the audience applauds, or stands and applauds, or stays through the credits. Without making a conscious decision about it you clap and watch the credits too, because this is a city where we appreciate a quality movie and the people who make them. This part of L.A. becomes part of you.

There are, for better and worse, many of these moments.

You call celebrities by their first name
“Justin is dedicating his Netflix concert to Prince. We are SO watching that.”

“I am HEARTBROKEN for Mad and Zahara and Pax and those kids – I don’t even know how Angie is doing it.”

You get a dog because you want to feel love in your heart again
Dating in L.A. is the worst. It’s not like you rescue a dog just because you’re this close to giving up the ghost and going monk, but it’s a factor. So you get a dog, and unlike anyone you date, that dog is always there for you, happy to see you, and would totally return your texts promptly, if it could text (PLEASE WORLD, CREATE A DOG TEXTING DEVICE PLEASE), because you better believe dogs would text their asses off.

Dogs: because they’re better than humans.

You form an unshakable opinion about Temecula wine even though you literally could not care less
You live in L.A., so you’re supposed to have refined tastes when it comes to film and food and wine. Local amateur wine snobs rate Temecula wines somewhere between Mad Dog and Franzia. So even though you’ve had wine from Temecula (and it was fine, and maybe you liked it), when the conversation turns to Temecula wine you shake your head and purse your lips and gravely intone, “I find that the tannins are too soft.” Everyone nods and agrees because no one remembers exactly what the fuck a tannin is, but they’d rather die than admit that. Whether your opinion is total bullshit does not matter – you have a strong take that everyone else agrees with. And that’s the important thing.

You sometimes forget about science
Say you meet some random guy at a party who says he doesn’t believe in climate change because global warming models have been proved incorrect over time blah-blah-blah, you might argue with him until your throat is sore because you value the environment, climate change is causing geopolitical upheaval, we’re already seeing erratic weather patterns, animal ecosystems and habitats are being permanently altered, melting ice caps threaten our coastal cities, and even though they’d kill us all in a heartbeat there really should be polar bears, because you believe in science. Buuuut if that same person told you about a really great detox cleanse you’d be like, “I NEED THAT RECIPE LIKE NOW. I just feel so off.” Even though there is no such thing as detoxing because your liver and kidneys naturally detox your body or you would die. And you know how we know that? We know this because of your old friend SCIENCE, you total situational scientist. (PS: You guys have to try my Wild Dandelion Strawberry Bliss Juice. It’s perf.)

You feel like if you ever met Sarah Koenig you two would really get along
We spend so much time in our cars that some of us (not naming names) develop potentially unhealthy one-way relationships with podcast hosts. Like Sarah Koenig from Serial. (Oh, Season One – we all went on a journey together, didn’t we?) When you’re wondering what you would say to Koenig if you met in person – and whether there’s a future that involves you taking her to that shrimp sale at the Crab Crib, or you wish she used code words during the show that let you know she’s thinking of you while doing hardcore investigative journalism – you’ve completely accepted car culture as part of your life, and that’s when the healing can begin.

RELATED: If I Die In This Whole Foods Parking Lot: A Letter To My Family

You pull a 180 on your high school classmates
When you were younger you wore your escape from rural or suburban drudgery with honor. “Everyone I went to high school with got married and had kids right away. They never lived. I’VE BEEN TO BALI EIGHT TIMES.” Then one day you’re looking at Facebook photos of your friends’ kids’ first days of school, and without warning you realize you were a fool for rolling your eyes all those years because deep in your heart there is an empty hole that you have been trying to fill with Mount Eden Chardonnay and local half-marathons and Sur La Table fall risotto workshops and dogs named after brands of liquor, and it’s your friends back in old Mayfield Heights who have it all. A spouse. Kids. A garage that’s bigger than your whole house. And they’ll be empty-nesters young, with plenty of money and time to enjoy life and an old age that probably includes grandchildren. You … finally found a Pilates class that starts after 7 PM. FINALLY.

You haven’t gone to the beach in more than a year and are OK with this
You’re OK with never going to the beach because you don’t like the beach. You’ll never admit this publicly. Publicly you’re very pro-beach, because the beach is a civic institution, and it’s beautiful. You support the idea of the beach – a place where one can go to relax, read The Girl on the Train, swim, tan, surf, Insta your toes and so on. But the reality of the beach is that it takes forever to get there, parking is a nightmare, there’s never any shade, the water is FUCKING FREEZING and alarmingly murky, the bathrooms are far away slash horrifying, and you get sand all over your phone, clothes, sandals, car, the hardwood floors at home and – somehow – your bed, even after a VERY thorough shower. Glad the beach is there. Would not sign a petition to have it destroyed or anything. Just don’t need it more than once every couple of 2-6 years.

You hope the big one hits right as your plane takes off
As far as I know I’m the only person who has ever thought this, but I’m including it anyway, because I need to know if it’s just me who is deeply disturbed in this specific way. Right up front: No one wants a major earthquake to hit Los Angeles, including me. But selfishly I sometimes think that if it has to happen it would be ideal if it happened while I was, say, Eurorailing for three weeks. By the time I got back home the power would be back on, the roads would be open and life would be normal again. Hey, it’s not like I am needed to perform search and rescue operations. If anything, first responders would be searching for and rescuing me. So in a way, I’d be doing my fellow citizens a favor by not being here when an earthquake hits. Again, this is NOT a wish for an earthquake, it’s just saying that if there has to be one, I wouldn’t mind missing it, because I’m selfish and terrible.

You fucking love celebrities
Admit it. You love celebrities. Oh, you can act like, “Yeah, this is LA, I see celebs all the time, no big.” But you are a lying liar of lies, you liar. It’s exciting to sit down to lunch at The Counter in Studio City and watch J.K. Simmons waltz in fresh off his Oscar win. This is because J.K. (see what I did there?) is a huge talent, and it’s fun to gawk at him because Whiplash is kind of a masterpiece that made you question the idea of how it is that we truly grow as people, and he was so thrilling to watch. Also, this would be true if Carrot Top walked in. Or Pauly Shore. Or any of the lesser Baldwins. And more contemporary names to create the button of this section, but because I’m 41, these are my joke person references.

You experience a really soul-crushing bone broth
It doesn’t have to be bone broth. But for our purposes here, it is bone broth. You’re driving away from Whole Foods – provided you survived – with a lone bone broth in your South By Southwest tote, when you realize that you’ve become everything you never wanted to become, you clichéd, health-forward, on-trend, custom-yoga-mat-owning, bone-broth-buying, Lululemon-Facebook-page-liking conformist monster, and you stop at a red light, and you think about all of the choices that led to this moment – all of the GOOP articles you seamlessly wove into your daily routine – and you bury your head in the steering wheel and wonder how much of your identity has been usurped by every piece of wellness content you’ve ever read online as you cry out, “Who am I? What have I become?!?” Then the light turns green, and you drive to Zumba.