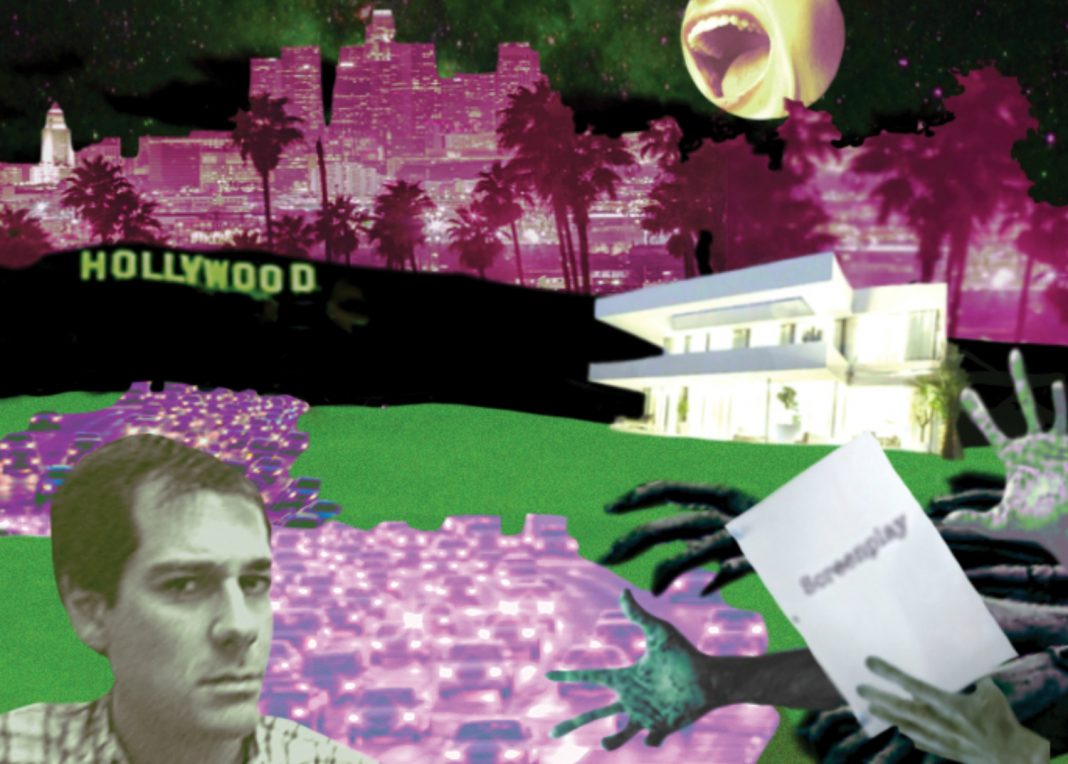 Most haunted houses in Los Angeles are filled with vampires, zombies, and other horrors no one who lives here worries about—they might as well feature tornadoes, floods, and a Republican-controlled state Assembly. A more realistic haunted house for many people here would include homelessness, ICE raids, and endless roadwork, but those wouldn’t sell a lot of overpriced tickets. Instead I’m thinking of building a Haunted House for L.A.’s Creative Class.

Upon entering you are instantly blinded by natural light from floor-to-ceiling windows overlooking a sleek infinity pool. When your eyes adjust, you realize you’re trapped in a vast Mid-century Modern house that you could never afford—mwahahaha!

Suddenly a doctor starts chasing you with syringes filled with IVF hormones toward a small room strewn with wooden children’s toys. Just eight kids are allowed in at one time because more than that doesn’t allow for one-on-one teacher-child interaction. But just as you’re about to step in, you’re blocked by an invisible wall. To progress any further you’ll need a recommendation from that dour Netflix exec on the school board who never remembers your name. It’s the ultimate L.A. nightmare: get the kid into Pioneer Wagon or cash in a favor that you desperately need for your upcoming pitch?

After you forego your future to get inside, the door clanks shut, and an earnest man leaps out and relieves you of all of your money in exchange for your youngest child’s preschool admission. Seconds later he reappears and drags you to a deadly boring party—an ’80s-themed silent auction—where he demands a hefty donation. You leave dazed, clutching nothing but a gift certificate to a restaurant that will close before you can use it. All the while you’ll be standing on a precipice 50 feet above the dungeon that is LAUSD. It’s jammed with 55 ADD-addled kids packed into the trash-compactor chamber from Star Wars. The children are looking up at you, screaming: “There are no music or art classes here!”

When you spin around to escape, you’ll confront the Torture of Kids Richer Than Yours. A zombie fourth-grader in $600 Yeezys will enter your beautiful home and ask if it’s the guesthouse. Your oldest child’s face will contort into a monster’s as he wipes cocaine from his nose and demands courtside Laker tickets like the Musk triplets have. There will be a very uncomfortable bat mitzvah in which Cardi B twerks from a stage.

After that you’ll pass through the long, crowded Hallway of Friends Moving to the Westside. You’ll never see these people again, only their ghosts—which appear every time someone visits from New York to chant: “You see your East Coast friends more than you see me.”

In this hallway you’ll also be introduced to the perfect Tinder match, who lives in Hermosa Beach. You’ll have a flirty, intellectually stimulating hourlong conversation during your commute on the 405 and plan to talk again the next day, when you’ll have an even better conversation. You’ll talk like this every day for the rest of your life and never, ever meet.

Then your phone will ping, automatically launching the app that shows what you’ll look like when you’re 80. In the Insane Asylum of Perpetual Midlife Crisis, you’ll sit at a table in a television writers’ room where every other occupant is 14. They’ll scream in delight as they point at Lil Nas X. You’ll pretend you, too, noticed Lil Nas X, and they’ll laugh and yell, “That wasn’t Lil Nas X! That was Blanco Brown!” Before you can respond, they’ll denounce you as a racist.

As cool as it would be to have a room in the Haunted House for L.A.’s Creative Class that splits down the middle as a bookcase slams inches in front of you, no one in Los Angeles is all that scared of earthquakes—though there will be a moment on the tour where the room vibrates imperceptibly, CNN reports on it, and your phone rings constantly as every relative from the East Coast phones to ask if you’re OK.

After a moment’s peace, a former employee will pop out of your creepy past and accuse you of inappropriately kissing her in 1991, and both your career and your San Vicente Bungalows membership will disintegrate. As you’re recovering from the shock, your studio boss will pop out of a closet and try to kiss you. To your horror, you kind of enjoy it.

But by then you’ve been whisked to the Witches’ Coven, where a clique of cheery women and one younger gay man will offer you warm bottled water and motion you to sit on the couch opposite their chairs, even though it would make way more sense for you to sit in a chair and all of them to sit on the couch. They’ll then invite you to reveal your most personal story. As you tell it, they watch you stone-faced. Though you know this is how pitch meetings always go, you also know that this is how your childhood went: You went into show business in order to finally be seen, and yet here you are in this room, totally invisible, just like when you were seven and your divorcing parents told you that they didn’t have time to hear about how Mrs. Dreyfus thought your story about two loving parents “lacked a clear drive for the protagonist.”

You’ll then enter what appears to be an ordinary Starbucks. But when you look around, you’ll notice that all the patrons in the Circus of Souls Without Day Jobs are insanely attractive people who are exactly your ex’s type. When you finally sit at a table and open your laptop, all your former studio coworkers will enter. You’ll tell them you’re “working on a project,” but they know that former executives at NBC don’t work on projects and that you’re unemployed. When they exit giggling, a zombie will approach. As he closes in, you’ll realize he’s not a zombie but an actor friend who’s desperate for you to read his screenplay. Then another zombie will sit down and explain, for two hours, how Sony stole his movie idea, which was about zombies.

As you run from room to room trying to escape, you’ll be tailed by an angry ghost. It turns out to be a TV writer who’s super pale because he has never been outside. He’s screaming because he has finally achieved success and now has to meet with studio executives, attend premieres, and speak at events, none of which he can socially handle because, well, he’s a writer. Wailing behind him is a lesser TV scribe who fears that when the Writers Guild finally settles with the agencies, her agent won’t take her back because she hasn’t sold anything in three years.

At last you’ll finally find the exit, which has panoramic views of downtown. You’ll run to your car, unlock the doors, and clutch your wallet, which is now empty except for a gift certificate to Odys + Penelope. You’ll drive as fast as you can straight past your house, all the way to La Cañada Flintridge, where you will call a real estate agent and buy an old, dark Victorian home, where you will finally feel safe.