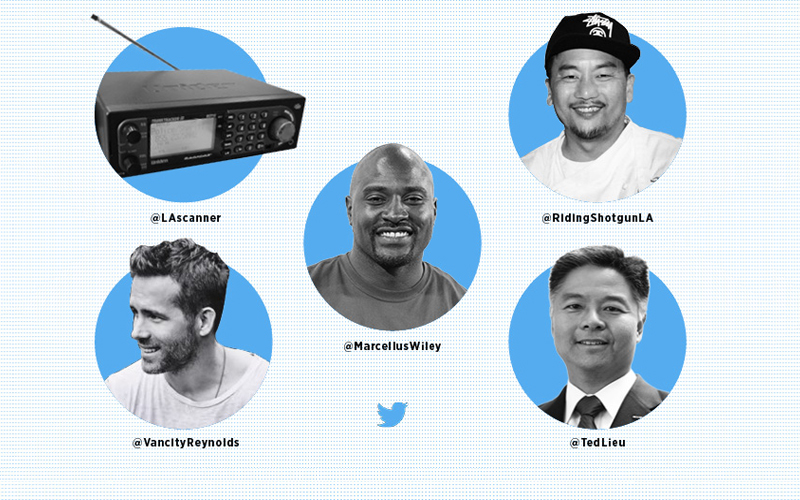 If you are as utterly obsessed with Los Angeles as we are, this is the painstakingly curated list you need in your life. Whittling it down to 50 was nearly impossible but someone had to do it. And that someone was us. In no particular order…

May this be the year where the illegal fireworks cause the dogs & cats to rise up against us. May they win & save us from ourselves.

4. @LAasSubject
Hosted by USC, documents our city’s past with incredible archival photographs.

5. @LosFelizDaycare
Parody account of a daycare in Los Feliz. Like all good parody, it’s almost too real.

When we showed this picture to our friends, Kumquat (137 weeks) asked if it referred to La La Land getting 14 Oscar nominations. 😐 pic.twitter.com/vVAx6gKCSR

People in LA are deathly afraid of gluten. I swear to god, you could rob a liquor store in this city with a bagel.

8. @militantangeleno
Self-described “part-activist, part-superhero,” this anonymous guy chronicles his explorations of Los Angeles on an extremely dedicated blog and an active Twitter account.

9. @LANow
Breaking news from the Los Angeles Times. Also recommend you follow @LATimes, the largest newspaper on the West Coast.

10. @BiblioSzabo
The Los Angeles city librarian keeps the city up to date with all the activities at the Central @LAPublicLibrary and connects readers to the incredibly varied activities of the 72 neighborhood branch libraries.

12. @SamOnTV
Any celebrity plugging a project here in town must drop by the desk of the KTLA entertainment guru.

The Best. The most talented. The nicest. Exceptional career in front of and behind the camera. https://t.co/dMZ2lZp4uA

No, this isn’t a scene from “GREASE” or “THEM”. This is a real photograph of L.A. river drag racing in the 1950s under the 6th St Bridge pic.twitter.com/0SuByEUDd2

14. @earthquakesLA
Want to know if that was just an earthquake? LA Quake Bot will tell you.

15. @LAFD
Los Angeles Fire Department shares breaking news about fires and emergencies. For safety tips and answers to your questions about fire and safety, follow @LAFDTalk.

16. @timeoutla
You have no excuse to ever be bored in this city. We got city guides out the waz.

A new bar, beer hall and cafe by @MikkellerBeer is opening in DTLA! https://t.co/wZJrEpJ3Eo pic.twitter.com/kgAXmAG7Is

RELATED: An Interview with the L.A. Scanner Guy

17. @NWSLosAngeles
The National Weather Service has the latest weather, on the occasions when there is some.

Rain coming next week? The Weather Prediction Center has a tenth to a half inch over our area. #LAWeather pic.twitter.com/hKWeEcGHY3

19. @ForYourArt
Bettina Korek recommends art shows and cultural experiences, because someone has to keep civilization going, damn it.

20. @RidingShotgunLA
Twitter handle of Roy Choi, the innovative chef who is also known for his prolific and authentic online presence.

Fuck mild cheddar and it’s no flavor having ass

21. @esotouric
Pics from the city’s most interesting bus tour. This city has a lot of bus tours. So this is saying something.

Today! Paranormal origins of the Bradbury Building revealed on The Lowdown on Downtown bus and walking tour. https://t.co/e24OlmYlUs #DTLA pic.twitter.com/qn3C0bTH2q

23. @awalkerinLA
Alissa Walker is the @CurbedLA Urbanism Editor. She travels the city by all means of transportation but car, and she tweets cool facts about it.

I’ve been thinking all weekend about what @mslaurabliss says here: It’s not about deleting one ride app for another https://t.co/Mtl0eCSVmL

24. @cinefamily
Gets people together to watch cool movies.

Just announced for January! ALL ABOUT ALMODOVAR: A COMPLETE RETROSPECTIVE (with 7 films on 35mm!)! Watch our OG trailer and get so excited! pic.twitter.com/lCB0ulMQ3y

25. @ericgarcetti
The mayor’s Instagram is better, but still a good source of often-timely information.

Together, we can put an end to homelessness. Thank you to 7,000 volunteers taking action to help @LAHomelessCount. https://t.co/kWGPmCrA91

Sometimes I feel like I could pull off the perfect murder. I’m not saying I would… but I think I could.

27. @CurbedLA
For people who want to know everything about their city and neighborhood, plus the latest on planning in the city.

28. @mattdpearce
The Los Angeles Times national reporter emerged during the election as a must-follow journalist on Twitter, both for his articles and his hilarious and sharp observations.

[Arrested Development narrator voice] He was not. https://t.co/7f5BxCsc7A

30. @LAWeeklyMusic
News about @LAWeekly’s music section, where a lot of the music conversation happens locally.

Still a question we haven’t gotten a good answer to. #HipHop https://t.co/OtLydMRWgq

RELATED: CA Congressman Ted Lieu Is a Beacon of Light in Post-Election Darkness

Think that 18% “service charge” added to your bill is a tip? Think again… https://t.co/G330nnScTG

Perhaps you would like to read a restaurant review this morning. Because noodles. https://t.co/70sXAq3JUN

34. @BMcCarthy32
Los Angeles Dodgers pitcher and guy who writes funny tweets when he is not pitching, which means he has a lot of downtime because pitchers work like, what, three hours a week? He should probably be tweeting more.

35. @NathanMasters
Explores L.A. and its history. Host of Lost LA on @KCET. Owner of one seriously I-know-some-stuff-about-history profile pic.

Great overview of efforts to uncover ancient LA streams with the aid of maps, photos, and other archival documents: https://t.co/ipewzRturF pic.twitter.com/3iuYXtpMV3

36. @mylastbite
Food and travel writer Jo Stougaard is co-founder of L.A. Bites Hunger, which is a group of food lovers fighting hunger in Los Angeles.

37. @chefludo
The celebrated chef. You know Ludo Lefebvre from Trois Mec, Petit Trois, Trois Familia, and LudoBird. Look at this pic below and tell us you don’t want to eat with the guy.

38. @BoobsRadley
Julieanne Smolinski is a hilarious L.A.-based writer (Grace & Frankie) who is beside herself about what’s happening in Washington. The tweet below is from simpler times.

At their separate Christmasses, my divorced parents unwittingly got me the same stretch mark cream. Happy Holidays, everybody.

39. @Venice311
Like L.A. Scanner, but for Venice, so with like 35 percent more naked guys driving around in vans.

Venice & AK: fruit loop under the influence jumping into traffic. Problem should solve itself.

40. @LACMA
Updates from the museum, with excellent art and photography.

Farewell to #RainRoom! Thank you for sharing your wonderful experiences with us! pic.twitter.com/Pulnk9OVBu

41. @paperhaus
Carolyn Kellogg is the book editor at the Times. And she’s a real character.

As of today, I’ve been book editor at the LA Times for a year. And so far I have not been crushed by a toppling pile of books in my office.

…both in this game and in professional football teams.

43. @GettyMuseum
It’s all about that art.

May 2017 please be the year we all stop using “like crack” to describe food.

Eye tracking blog platform that does not allow comments to be posted until entire article is read.

46. @marcelluswiley
Some sports media use Twitter to break news. Some use it to have fun. Marcellus Wiley is one of the fun ones. Probably the most fun sports guy in town.

47. @DiscoverLA
Official account of the local tourism board, but don’t let those words put you to sleep. Shares things to do and see around the city for locals and visitors.

48. @AvaDuvernay
Directed 13th, a movie about the criminal justice system. Comments on current events on her Twitter account. (We love her.)

Amplifying words of one of my favorite filmmakers, Asghar Farhadi, who like too many others will be turned away from the Land of the Free. pic.twitter.com/CcskcFueuo

49. @hiddenla
Uncovers cool, fun, new things to do in the city. Un-hiding them, if you will.

50. @LAMagFood
Wait. What? How did this one get on here? Who wrote this thing, anyway? Probably the people from @LAMag. Ah, really? Will the shameless self-promotion ever end?

13 Breakfast Burritos in L.A. You Have to Eat Before You Die: https://t.co/FQrzG8GAwo pic.twitter.com/V3R0LP4bDx