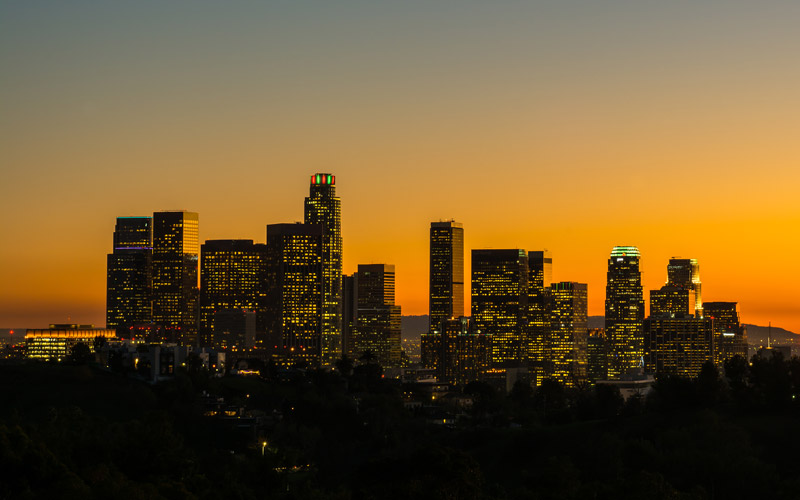 We’re not going to argue that 2016 wasn’t a dumpster fire of a year, as prevailing sentiment would have it. But it wasn’t all bad—especially here in Los Angeles. Our transit system grew by leaps and bounds, the Rams made their long-awaited return, and at least a handful of us even caught a Pikachu. Maybe it’s time to accept that no amount of liquor-laced hot cocoa will fill that Bowie/Bernie/general-sense-of-there-being-justice-in-the-world shaped hole in your heart, and to remind yourself that, hey, we live in one of the greatest, most interesting cities in the world. Before squaring up with 2017, pause, take a breath, and look back on the most memorable events that captured our attention in the past 365 days.

The Gold Line extension to Azusa also became a reality

We’re well our way to having a New York-style transit network, only ours won’t be a stifling underground purgatory.

Never, never give up.

Little did we know how much we’d need the escapism. And OH MAN, BUTTERBEER.

Skyspace took over the top of the US Bank Tower

The attraction fills the 69th and 70th floors and takes the city’s rooftop game to new heights (altitude pun one of two). Its opening also coincided with the debut of some pretty stratospheric fine dining (altitude pun two of two) at 71 Above upstairs.

The Wilshire Grand topped out

Downtown officially crowned its new tallest building, and we all freaked out over that photo of construction workers balancing on the tip of the spire.

April 13 will forever be Mamba Day.

It’s been too long.

They triumphed in the Finals for the first time since 2002, with Candace Parker winning the Finals MVP award.

La La Land is taking theaters by storm with dreamy song and dance routines, Hail Caesar! was a major nostalgia trip, and Knight of Cups, if pedantic, unleashed the matchless cinematic sensibilities of Emmanuel Lubezki on our city. The Jonathan Gold documentary City of Gold really just made us want to eat at Jitlada every single day, and two different shows about O.J. Simpson—FX’s American Crime Story dramatization and ESPN’s spellbinding O.J.: Made in America documentary—took us back to that decade-defining chase.

And speaking of car chases…

.@TMZ trying to come to the rescue!?!?! This #Pursuit could not get more #Hollywood!!!! pic.twitter.com/ND8BVcLDKU

In your mercy, O 2016, you blessed us with this absurdity.

You heard it first from us, this is the best new restaurant of the year. (The fried tofu sandwich could very well change your life.) And yes it’s vegan because this is 2016 and we all realize now that vegetables are as worthy of main course status as meat.

Howlin’ Rays induced tears of joy/pain with its crushingly spicy chicken, Unit 120 challenged the very concept of a restaurant, Eddie Huang’s Baohaus took over from Pok Pok Phat Thai (RIP), and the monthly Chinatown After Dark fest drew major crowds. The entire strip mall earned a spot on Jonathan Gold’s 101 Best Restaurants list (which is actually deeply confusing because it’s a strip mall, not a restaurant, but hey, we’ll take it).

Remember how, for three weeks straight, the park nearest your house was crowded with young people dropping lures and flinging pokéballs—even at, like, two in the morning? Remember how the Santa Monica Pier was absolutely lit? Pokémon Go peaked and fizzled quickly but was fun it lasted. Sorta like the word “lit.”

Thousands took to the streets in protest after the election

On Saturday, November 12, an estimated 8,000 people gathered to protest the election of Donald Trump. And that was just one of numerous marches.

L.A. voted to help the homeless and invest in public transportation

Do you feel that in your heart? Yeah, that’s civic pride.

The first flights from LAX to Havana were up for grabs

Not to mention there’s a new airline offering direct flights to Iceland for crazy cheap.

The Hamilton Mixtape dropped, only intensifying our deep, deep longing to see the musical live

Thomas Harlander is a staff writer at Los Angeles magazine. You can follow him on Twitter and Instagram. He recently wrote “The Complicated Sadness of Getting a Gift You Secretly Hate.”