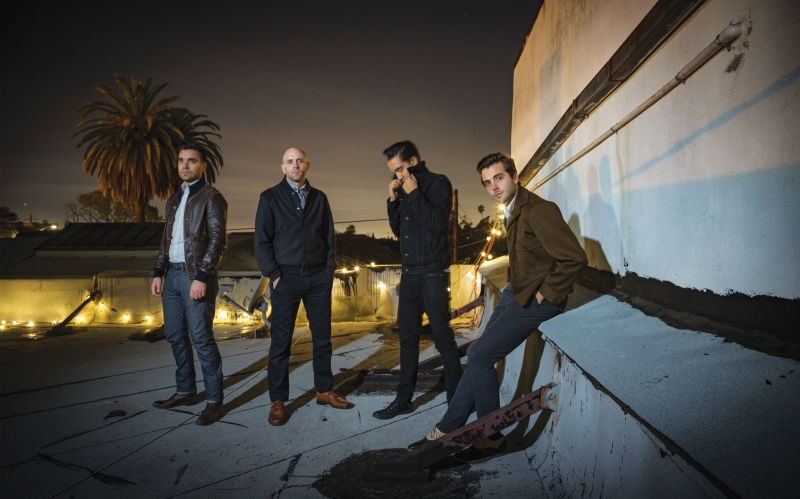 It was on a meandering night drive through L.A. that Ben Schneider dreamed up the idea for Lord Huron’s third album, Vide Noir (out April 20). Seeing the flickering grid before him and the darkness above, he imagined a character: “He’s on an odyssey through the bars and clubs of the city,” Schneider explains, “but he sometimes spins off into outer space or other dimensions, across the spectrum of human emotion. He lives a whole life in one evening.”

The band’s front man boils the concept down to “a sci-fi detective story,” and it’s right there in the record’s title, which is both French for “black void” and a nod to the L.A. described in Raymond Chandler novels. Indeed, the slinky, sax-backed tune “When the Night Is Over” could play in a smoke-filled jazz joint on the moon, but Vide Noir, mixed by Dave Fridmann (Flaming Lips, Tame Impala), also teeters among twangy folk, greaser punk, chamber pop, electronic lullabies, and psych rock.

That woozy, often explosive mix is testament to the chemistry of Lord Huron’s members, four thirty-somethings who’ve been in bands together since they were preteens growing up in woodsy Michigan and who now run their own studio—the Lynchian-styled Whispering Pines—near USC. Schneider came to L.A. in 2005 to pursue a career in the visual arts, but when his early solo EPs stoked interest from local tastemaking imprint IAMSOUND, he called on his old pals to join him. For their 2012 full-length debut, Lonesome Dreams, they concocted an odd backstory: Each song was a take on a different Western dime novel by George Ranger Johnson, an author they’d invented.

In fact, all of Lord Huron’s albums are set in the same arcane alternate reality: On Vide Noir you’ll re-encounter the World Ender, the undead biker protagonist of 2015’s Strange Trails. (That LP’s “The Night We Met” won the band its deal with Republic Records after it played in an episode of Netflix’s 13 Reasons Why.) For this album, the band set up a hotline, 1-877-VIDE-NOIR, where callers can hear psychic readings and ads for fake occult products.

“There are very few rules in terms of what can happen in our world,” says Schneider about the band’s fictional universe. But he could easily be talking about its reality. A spring tour kicking off at the end of this month sees it headlining some of the largest venues of its career—including the Greek on June 2—and ready for real mainstream success. “Sometimes people feel trapped in the project they’re in,” he adds. “We try to keep in mind that we can do whatever we want.”

RELATED: Why L.A. Can Be Proud of Kendrick Lamar’s Pulitzer Prize