Home TV The Best TV Show You’re Probably Not Watching is Set in a... 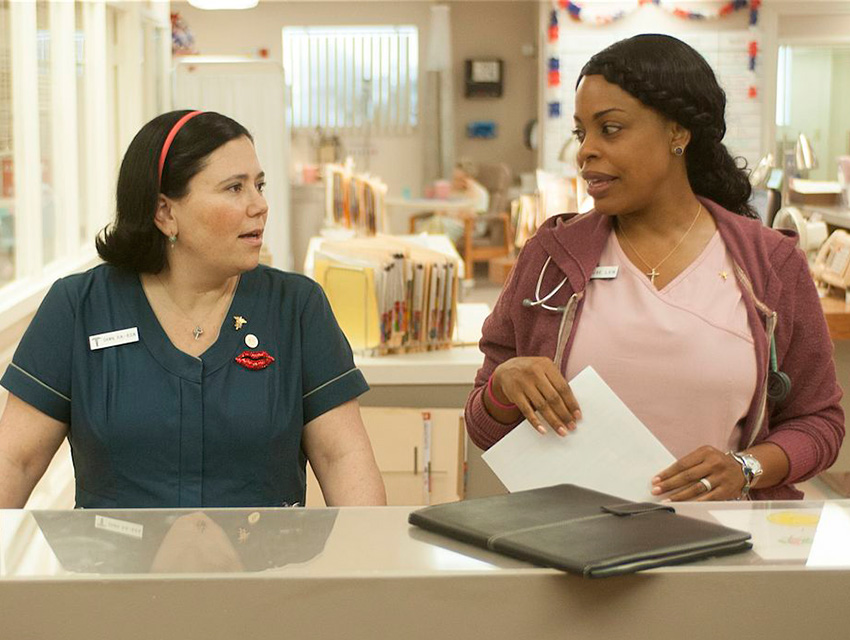 Set in the extended care wing of a Long Beach hospital, HBO’s Getting On is about the doctors and nurses working in the geriatric unit. If it sounds like it should be gloomy, don’t judge a show by its premise. Getting On, which airs on Sunday nights and just launched its second season, is one of the funniest comedies on air.

The ensemble cast of Alex Borstein (Family Guy), Niecy Nash (Reno 911), and Laurie Metcalf (Roseanne) makes even the most mundane hospital activities worthy of a binge-watch. Dramatic circumstances laced with subtle humor are the show’s stock in trade. We caught up with Mark V. Olsen and Will Scheffer, the writing and producing duo behind Getting On, to discuss the show’s newfound hype, standout moments, and upcoming gags.

The show has been called a “black comedy” and a “morbid comedy.” How do you perceive it?
Olsen: I definitely call it a comedy. When we’re writing, we build up an arsenal of comedic elements to use in the show: slapstick or physical moments, wordplay with or without preposterous medical jargon, ten or so different character-driven moments. The rest falls into place around those comedic moments.

Scheffer: This will show how perverse we’ve become two seasons in: We don’t even really find it all that “black” or “morbid” anymore.

You adapted Getting On from a successful British show. Why did you decide to set it in Long Beach?
Olsen: We wanted a world somewhere outside the orbit of Los Angeles, something a little more working class that’s removed from the entertainment industry. And Long Beach/San Pedro has that feel.

Scheffer: We thought about sticking it in Omaha or Milwaukee, but there’s something about that eternal Southern California sunshine that so nicely contrasts with the ephemeral nature of life on this ward.

As the show continues, how important to you is it to remain authentic to the plots and themes of the original show?
Olsen: We relied heavily on the original BBC material for the first season, but this year we’ve taken wing and flown on our own story and plot wise. The original themes and tone remain important to honor, though, because we love them so much.

Scheffer: There’s such generosity and spirit in the underlying material. We don’t ever want to lose that.

What elements of the British show did you have to tweak to make it appeal to American audiences?
Scheffer: We had to adjust the central focus. The British show was conceived as a loving sendup of their NHS (national health care) system. We altered our focus to center on geriatric care and end-of-life issues. What death and dying means in our society. Then the characters needed an Americanization: less reserved, less buttoned-down and proper, more openly neurotic and in-your-face.

What’s it like to tell the story in only six episodes per season?
Scheffer: For starters we’ve discovered that the show is a voracious consumer of story, and every episode loves an incredible amount of it.

Olsen: Stakes have to be higher right off the bat in order to resolve things and have a proper start, middle, and finish. That gives us a chance to play the comedy higher and maybe more lewdly, which we love.

Scheffer: But you have to be careful that you don’t become an overstuffed Thanksgiving turkey. It’s just one of the many balances we have to be mindful of.

Do you have a favorite character to write?
Scheffer: Absolutely cannot answer this question.

Olsen: We love all our children equally and for different reasons.

There were so many standout moments from the show’s first season. My personal favorites were the language barrier scene in the pilot and June Squibb’s guest appearance. What were some of your favorites?
Olsen: Dawn (Alex Borstein) tumbling into the fountain. She does all of her own stunts and she’s great at physical comedy. Then the whole drunken Dawn and Patsy fight throughout the nightshift episode is great.

Scheffer: Molly Shannon was great. There’s one conversation where she bargains with Dr. James over which pain meds her mother is on, and Dr. James (Laurie Metcalfe) replies, “Could be this, could be that. Could be oxycodone, hydrocodone, hydromorphone—the Atchison, Topeka, and the Santa Fe!” It’s so horrible and spectacularly awful, but true and funny. And Laurie nails all the medical jargon every take, without fail.

Before Getting On, you created Big Love. What made you want to turn to comedy?
Olsen: The year before we sold the show to HBO, both of our mothers died. We learned during that time that through all the pain and suffering that comes with being in a hospital or at a home while they breathe their last breaths, there’s actually a lot of funny stuff that happens.

Scheffer: By losing a loved one you sort of come to acknowledge that even the darkest moments in life have a bright spot.

What can fans of the show expect to see in the second season?
Scheffer: Laurie Metcalf sails off into another galaxy. That’s how great she is this season. Everyone hoists with their own petards, flies with wax wings a bit too close to the sun. They’re all taking things one step too far, and some of them might get in big trouble.

Why do you think the buzz surrounding the show has increased so much for the second season?
Olsen: HBO gave us a really great marketing push this season, which we didn’t get last year. But more importantly, people have been discovering the show for themselves and spreading the word.

Scheffer: We’d like to believe that people who might’ve been too uncomfortable and hesitant to embrace the premise of the show have found that it’s really quite accessible and fun.