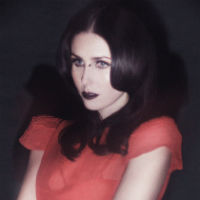 Chelsea Wolfe, L.A.’s gothic queen supreme, burst onto the underground music scene with her debut album The Grime and The Glow, in 2010. A year later, she followed that with the critically acclaimed Apokalypsis. Both albums are powerful testaments to Wolfe’s abilities as a songwriter, switching seamlessly between intimate and acoustic folk to grandiose guitar riffs and pounding drums without lapsing into overdetermined eclecticism. Behind all of it Wolfe’s powerful voice jumps out at the listener like a predator in the dark. Since releasing her fourth album, Pain is Beauty, last year, the California native has burst out of the underground and onto playlists everywhere.

Wolfe recently teamed with Mark Pellington, who directed music videos for Pearl Jam and Alice In Chains as well as the movie The Mothman Prophecies, to produce an hour-long film, Lone (of which the video for ”Feral Love” is an excerpt). The dialogue in the film is based on the lyrical universe of Pain is Beauty.

We spoke with the singer about making Lone, horse statues, and directing your anger at the sun.

On April 29, the Vista Theatre in Los Feliz will host a special screening of Lone. Doors open at 6 p.m. and the movie will be followed by a Q&A with Wolfe, director Pellington, and musician Ben Chisholm.

When and how did you come up with the idea for a film?
It was Mark’s idea. My manager Cathy Pellow sent him one of my new songs “The Waves Have Come” before the album [Pain is Beauty] was released. They are old friends and she thought he might like it. Mark wanted to do a music video for the song. As we met and started listening to the album he was inspired to expand it into a film with five of the songs.

The dialogue in Lone is based on your lyrics. Does the film have a story?
The dialogue is derived from notes I took while I was writing Pain is Beauty. When I’m working on an album I have pages and pages of notes. Some more poetic, some more practical or educational about the subjects I’m exploring. When we started working on the film I dug into those and pulled some lines that related to the film. There’s also the great line from the Bhagavad Gita, “Now I am become Death, the destroyer of worlds.”

What is the connection between “Feral Love,” the video, and “Lone”?
The “Feral Love” video is essentially an excerpt from the full film but it also stands alone as a music video.

What was it like working with Mark Pellington?
Mark is a great person and an intense visionary. I know it’s a cliché but the experience stretched me and became something I didn’t expect. I learned a lot and let go of certain things. It ended up being a cathartic experience for both of us.

The film presents a realistic depiction of the world whereas your lyrics are far more abstract and laden with symbols. What was it like to translate music to another medium?
Mark has a very frantic and wild way of putting images together, and I was open to allowing him to interpret my songs into his vision. I was involved of course, but I wanted to let him do what he does and have the freedom to bring new context and significance to the music and lyrics.

Did you have a lot of creative influence in terms on the aesthetic of the film?
Yes and no. There was a lot of back and forth, in a good way. Mark wanted to make sure I was comfortable with everything but also wanted to push me and my visuals into places I hadn’t gone before. I had some influence and I worked with my stylist/costume designer to incorporate some pieces that I had worn on tours, on the album cover, etc., so I had something familiar with me throughout the filming.

Where did the running horse statue featured in both “Feral Love” and “Lone” come from? Does it have a special meaning?
There is a feeling of forward motion throughout the album that I wanted to portray sonically. When Mark was asking me what images came to mind in relation to the songs I brought up horses often, that rhythmic feeling of hooves running. The statue was symbolic of that.

Have you ever acted before?
No, but I don’t know that I was acting in this. I did feel very much a part of something outside of myself though. It’s strange to see yourself like this for the first time, very vulnerable and emotionally naked, close-up and sometimes at unforgiving angles. Each character in this film carries an emotion: shame, guilt, personality, death. I’m sort of the narrator, guiding you on a surreal journey through memory and dreams. Sometimes it’s hard to decipher what’s real and what’s a foggy remembrance.

Where was “Lone” shot?
In the desert a few hours north of L.A. and in a burnt forest area and the beach in Malibu. One day there was a white pony on set on the beach and hardly anyone around except for the crew. It felt pretty magical. The final day of shooting was at the Lee Strasberg Theatre and Film Institute.

What was the process like making the film? How is it different from shooting a regular music video?
I haven’t made many music videos so all of it is pretty new to me. This was my first time working with such a big crew and I was very grateful for everyone involved. They were all very hard-working and kind. I can see now how much work goes into a single shot and it’s pretty wild.

What was the most challenging thing about the shoot?
Being in the sun so long. We filmed in the desert for 13 hours the first day and I was wearing blackout contacts for most of it so I was squinting and dried-out and the eyedrops felt like needles. At the end of that day we shot the final scene for the song “Lone” and it was perfect because I was tired and angry at the sun; it was easy to think about the song and remember the emotions I felt when I wrote it.

What do you hope to achieve with the film?
I hope it can be something for people to trip-out on and find something healing in as well. That was my ideal for the album, so this has become a new visual extension of that.

Do you plan on making more?
I’m just taking each day as it comes!