Home Uncategorized A Guide to the 100 Stunning Architectural Gems of L.A. 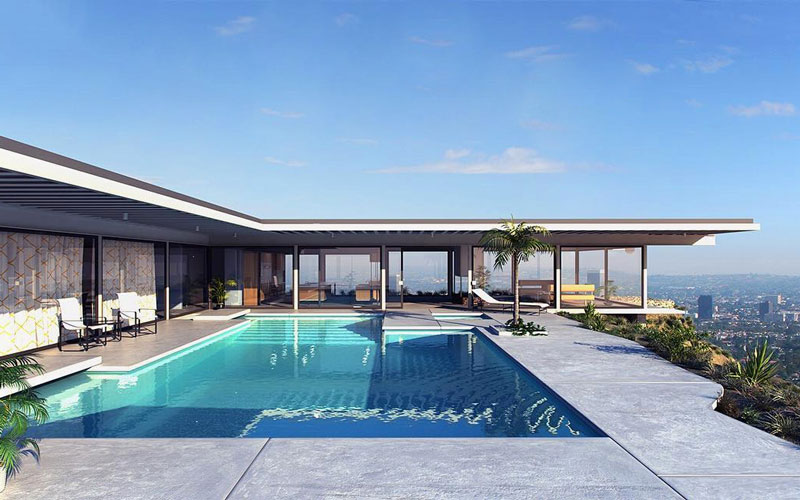 Los Angeles has always been a city of whimsy and experimentation. Ours is a landscape dotted with fantastical castles built by dreamers who moved west. And have you seen the mid-century modern homes scattered among the hills? (Show of hands, who’s just here for the mid-century modern stuff?) Not to mention we’re home to world class architects and contemporary innovators cooking up solutions to the problems of homelessness and urbanization. Granted, there’s aprox. a billion more incredible buildings here that could have made this list, but hey, we’re finite people in an infinitely fascinating city, and we had to start somewhere. So without further ado, and in no particular order…

One of the many reasons Frank Gehry is considered the world’s greatest living architect.

Despite being a paradigm of brutalist architecture, the building—with its angular concrete columns and aggressive stained glass windows—makes for an unexpectedly serene sacred space.

A box of dorms hidden behind a metal scrim encloses a hive of classrooms and offices—all brought to you by Thom Mayne’s Morphosis Architects. No matter how nicely you ask, the security guard won’t let you inside.

Pío Pico was the last Mexican governor of California, and the hotel he ordered to be built in 1869 was the finest in Los Angeles. It’s now a historic landmark on Olvera Street.

Architect: AC Martin
Not yet completed

The new tallest building in Los Angeles (if you count that spire).

The mismatched collection of galleries has been through plenty of updates to William Pereira’s original design—including work by contemporary “starchitect” Renzo Piano—but Bruce Goff’s whimsical, right angle-devoid Pavilion for Japanese Art is the most unique.

It’s designed in the Streamline Moderne style and is intended to look like a ship—complete with portholes, catwalk, and bridge.

The cream-colored stone (16,000 tons of Italian travertine, to be specific) that encrusts the exterior of Richard Meier’s modern masterwork glows beautifully in the Los Angeles dusk.

USC’s first football game here was on October 6, 1923 (they beat Pomona 27-3). The stadium has since hosted two Olympics, two Super Bowls, and one World Series.

Brothers Charles and Henry Greene, masters of the Craftsman style, designed this classic Pasadena bungalow with its Southern California setting in mind, and yes there are multiple “sleeping porches.”

Kaufmann, the guy who designed the Hoover Dam, won a gold medal at the 1937 Paris Exposition for the Times building, which includes a gilded lobby with a massive globe that’s open to the public.

The victorian mansion looms over Franklin Avenue and has served as home base for an exclusive society of magicians since 1963.

For a while there, L.A. was really into that whole building-shaped-like-a-giant-food-item thing.

In the late ’50s, Los Angeles was the place for the funky, space-age Googie style exemplified by this Armet & Davis-designed coffee shop.

Though the building is currently facing demolition, it was designed by Welton Becket in the International Style in 1955 as a symbolic step into the modern world for the historically corrupt LAPD. The department moved into their new DTLA headquarters in 2009.

In the mid-1800s, when everyone else around him lived in adobe haciendas, Banning (the guy who built L.A.’s first railroad) constructed himself a Greek Revival mansion. It’s now a museum.

Conceived as part of an arts complex for oil heiress Aline Barnsdale, it’s the only Frank Lloyd Wright house in L.A. that offers interior tours, and it’s unique for its temple-like layout and abstracted hollyhock motif.

Designed in a style dubbed “Modern American” by one of its architects, it was meant to be a synthesis of multiple styles (though it largely falls under the Art Deco umbrella).

The single best thing about driving on the 101 is that moment when the Capitol Records building comes into view with its dramatic spire (that red light at the tip constantly blinks out H-O-L-L-Y-W-O-O-D in Morse code).

This lustrous Art Deco gem pulls all the stops—zigzags, starbursts (the design, not the candy), gold and silver adornments, and deco chandeliers. Howard Hughes owned it for a spell, and it played host to the Academy Awards all through ’50s.

With its eye-catching neon sign, floor-to-ceiling glass windows, flagstone walls, and one hell of a roofline, this is the purest of Googie.

A photo posted by Karla Delgado Photographer (@karlasphotographs) on Jan 27, 2017 at 2:25pm PST

In 1771 Spanish Franciscans founded the fourth of California’s 21 missions. Refer to the nearest fourth-grader for additional information.

Look, if we could fit every theater on Broadway into this list, we would, because they’re all sumptuous and wonderful (and if you ever get a chance to see a show inside, jump on it), but since the Los Angeles Theater is undoubtedly the most opulent, it gets the top spot.

Though it may not be the oldest building in Los Angeles (that one earned a spot on our greatest hidden gems list), the Olvera Street landmark is perfectly emblematic of the first houses built here by Spanish settlers.

Architect: Elmer Grey, with an expansion by Paul R. Williams in the 1940s
Completed: 1912

Elizabeth Taylor spent six of her eight honeymoons in Bungalow 5 at the pink palace.

An absolute paradigm of Art Deco design, the building housed the nation’s first car-centric department store (there were huge display windows in front, and a ton of parking out back).

This is the iconic mid-century modern home, boasting matchless views over the city through its glass walls. If you do any architectural house tour in Los Angeles, make it this one.

The Mediterranean-style monument has graced the city of Pasadena for 80 years and your Instagram feed for at least five.

34. Cathedral of Our Lady of the Angels

Spanish architect José Rafael Moneo eschews tradition for a deconstructivist church designed to be reflective of the city’s diversity.

It’s for sure a UFO.

Griffith J. Griffith may have shot his wife in the face (she somehow survived), but that didn’t stop the city from accepting his gift of a beautiful public observatory with his name on it.

Pretty much indisputably the world’s most glorious mid-century bowling alley.

39. Department of Water and Power Building

If you’re downtown at night, there’s nothing more serene than a walk around the rectangular pool surrounding the LADWP headquarters.

Another of the city’s finest examples of the Art Deco style, its turquoise terra cotta exterior and neon-lit clocktower make it an unmissable downtown landmark.

Frank Lloyd Wright’s most impressive “textile-block” house was built with more than 27,000 patterned concrete blocks. It’s one of the finest examples of Mayan Revival architecture out there.

Designed by Schindler in early ’20s to be an experiment in shared living (he and his wife Pauline shared it with another couple), the residence basically set the stage for Southern California modernism.

John Lautner’s incredible concrete and glass masterpiece (you remember it from The Big Lebowski) is owned by basketball superfan James Goldstein, who recently donated the house to LACMA.

Designed by the same architect who built Pico house, the cathedral was vacated by the Archdiocese after the Northridge quake, but was saved by preservationists. It now functions as an event space and houses the restaurant Redbird.

The space age was a great age.

Built into the side of a cliff in Los Feliz, this is first steel frame house in the United States and widely considered one of the most important homes of the 20th century.

Mariachi musicians used to pack out the hotel and then perform in the plaza (now Mariachi Plaza) across the street. And yeah, we can all agree that more buildings should have a Queen Anne-style turret like this one.

The glass ceiling, Victorian court, and ornate wrought iron railings within downtown treasure were inspired by the utopian sci-fi novel, Looking Backward, which explains why the building shows up so much in Blade Runner.