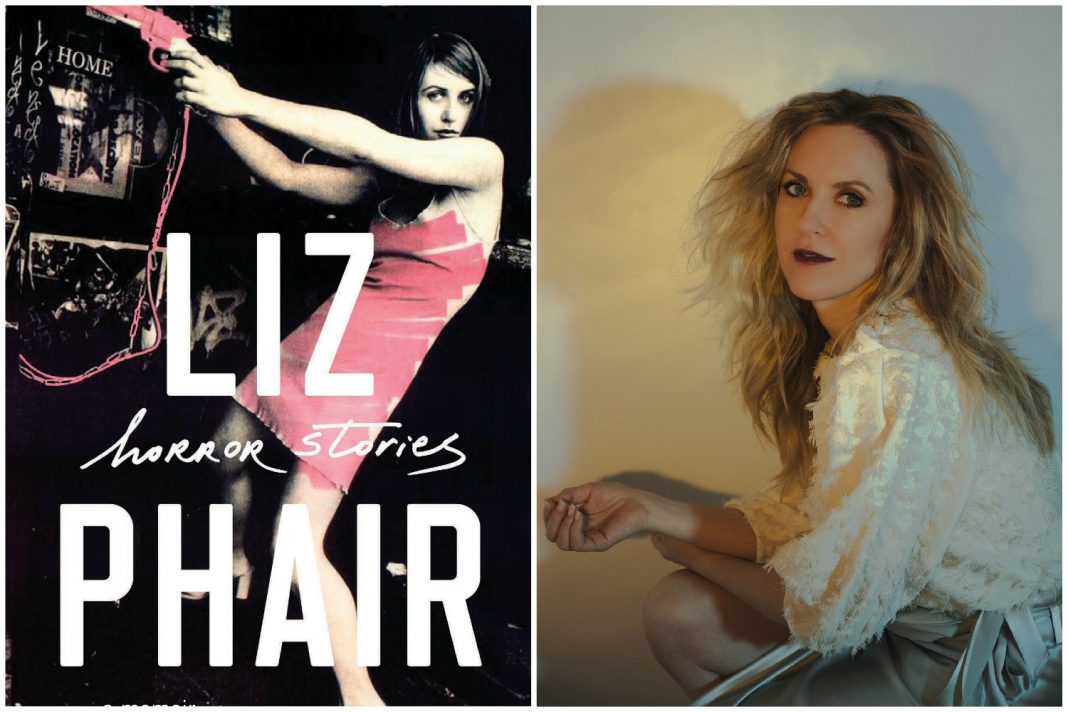 Alt-rock icon Liz Phair’s new book, Horror Stories, captures both the very small and the very large moments of the singer-songwriter’s life in literate detail. Like the title of one her signature compositions, she’s a whip-smart woman who knows how to make words seethe, pop, and sparkle. That her tone never deviates from its deadpan delivery is part of her artistry—she’ll always be the wry observer at the party.

She entered our consciousness in the ‘90s, a waif badass—braless, mini skirt, moto helmet—strumming her guitar with a shimmy and a wink, “fuck” dripping off her tongue as easily as “love.” Both in lyrics and in visuals, she objectified men with cheeky casualness—her abrasiveness was endearing—and that she went there made her a feminist icon in a male-dominated industry.

Horror Stories, a series of vignettes strung together as a non-linear memoir, is authentic and unvarnished, under-produced like an indie cassette and truly literate—quoting Camus as deftly as the interlopers in her dreams. We can picture her Chicago upbringing in lightly faded Kodak snapshots, the sensitive, adopted daughter of a power-couple, who makes her way to Oberlin College where the stage was wide open for a young woman with lyrics and a used guitar. But it’s in the Big Blue, the Great Pacific Ocean, where she finally meets her authentic self, healing from a brutal betrayal by learning to surf.

“Why are we surprised to find dark matter residing within ourselves? Emptiness is filled to the brim with anti-starlight,” she writes. “There’s a brilliant story in each and every moment of our lives if we pay attention.”

Phair’s been paying attention. She’s hard on herself, exposing her foibles and ignoring her gifts, and her new single, “Good Side,” is a perfect accompaniment to the read: “There’s so many ways fuck up a life, I try to be original.”

You’ve made Los Angeles your home and the book is filled with L.A. stories and moments. Are you happy with your choice?

I was grumbling about Los Angeles before the 2016 election. My beef was that every party you go to you have to have your three lies about what you’re doing in your career. No one ever asks you, “How are you?” I’m from Chicago where they really want to know how you are doing. And I come home to Los Angeles, and it’s, “Whatta you got going on?” And they get that weird look in their eye, where they’re trying to gauge if it’s true what you’re saying, and if there’s an opportunity in it for them. And they then lay out their three lies, to make themselves sound like they got something bigger going on. And I just thought, this not connecting, and this is networking in the worst way.

And after the election?

I felt really threatened by the Trump Administration and all these people who were popping out of the woodwork who want to go back to the 1950s, I was horrified. And I suddenly realized not only is Los Angeles beautiful, not only is Los Angeles a place you can be creative and there’s an economy for that, but it’s actually a land where the chief of police will say, “Hell no! We are not going to go and look for undocumented residents.” I thought, there is a firewall, good luck trying to come in here Trump. And I suddenly was like, this is heaven. And I never looked back. My complaints about Los Angeles were so small. My favorite channel is Spectrum One, they do in-depth stories about people in Los Angeles that I really want to know about. I’m now so much more focused on getting to know my city.

Tell me about the title, Horror Stories.

The title is kind of tongue-in-cheek because so much of our entertainment uses the idea of horror. We enjoy terrifying ourselves in our entertainment but it’s usually like “Zombies have taken over the world!” Much of the impetus for this book is me yelling at the television during the 2016 election and just feeling horror at what was happening to our country, feeling horror when I saw honesty and empathy being chucked out the window. We see news things come through Twitter, and we’re so desensitized. Like the other day, my eye landed on the body of the Kurdish politician being dragged from her car, and I’m not prepared to see the dead body of a woman being kicked by a soldier. The headlines said she was dragged out, raped and stoned to death. It numbs us all out. We’re being bombarded so I kind of wanted to drive everybody’s attention to the personal, to the intimate, to things you might not even credit as being impactful. I really believe that it’s the dark matter in the universe that’s holding everything together.

I love that you open with an Edgar Allen Poe quote: “I was never really insane, except on occasions where my heart was touched.” You must love to read; it seems you were inspired by the Gothic, existential writers.

I was. Satre’s Nausea and Camus’ Stranger were two important books for me, that style where you take a different lens on the world. The writing of Clockwork Orange, inventing a language, or William Goldman’s Princess Bride, anyone that’s playing with language and perspective. I love the art of writing. My favorite novel of all time, Catcher in the Rye, has a sense of the avant-garde. I’m inspired when people take risks with language but it feels very familiar at the same time.

Your book has a gun on its cover.

It was the designer at Random House. It was his first impulse, and my mother said, “Don’t put a gun on the cover in this climate.” And I thought about it, but it just kind of fits because it’s a fake gun. I have this tough persona and I have carried myself in these environments with maybe more toughness than I actually feel, like a bravado. So I like the fact that it symbolizes the toughness was a bit of a put on to protect me from the outside, but I never had any real bullets.

This is partly what attracted me to the music business, you know the “sex, drugs & rock ‘n’ roll” stereotype. It was understood that this is what made it an interesting business because it was very permissive, very different from straight business. It was like the wild, wild, west. Anytime you get a free zone in society it attracts the wrong people. They do it because there are no guardrails and that makes it a profession of gamblers and thieves and predators.

And you were so young when your fame exploded.

I was 26 and had felt sexual pressure since high school. Anytime I felt like I was in a vulnerable position, I pushed back. I put sexy songs in my record, that was another way to say, “Hey, the guardrails are off. There’s permission here.” What I was trying to do was push into their face something shocking that would push people back and give me a little shock-and-awe campaign to make myself a little more intimidating. I could not stand the feeling of every guy trying to see what he could get off you. I still can’t stand that feeling.

Did it work? It must have, I recall you being compared to feminist icons.

It did work to a certain extent. It certainly set a tone for me being able to speak up. Suddenly, everyone expected me to say something. It took my years to even take advantage of that. It took a long time for me to grow up being female in a male-dominated industry in such a crazy wild ride in the music business.”

You address #MeToo in the chapter where you were working with a top producer. Clearly, as you state: “Douchebags were everywhere.” That’s just how it was.

It’s maybe the worst horror story in my book because it makes you remember how it was, it makes you have to think about it. All of us wanted to work and it was a male-dominated industry. And we just expected in a weird way to just muscle through it and that’s a horrible thing but that’s how we thought.

In retrospect, it makes your first album title, Exile in Guyville, look pretty damn prescient, and the way you played off the Rolling Stones album.

The one time I met Mick Jagger he basically told me he forgave me for building all of my success on my association with him. It was so funny, because it was absolutely clear he never heard the album and had just heard about it, and the only way it penetrated his stratosphere was, “You cheeky bugger, you’re welcome for your success.” I almost curtsied.

Any thoughts on the ‘90s, that beautiful decade of flannel?

We really felt like we had been a part of a small revolution that was going to be better for everybody. Nirvana was the tipping point. It had been these huge hair bands and really manufactured pop rock and then this post-punk attitude came into play and swept the field and changed it overnight. Nirvana came from that DIY aesthetic that the punk tradition engendered, and I believe that was the same influence that I was being marinated in Oberlin College with local bands. I felt like more able to get on stage because the veil was lifted and you could get on stage if you had something to say.”

My favorite Oberlin story was you going up to the student who ransacked your house—pissed because your roommate slept with his girlfriend—and you told him he had to give you money. That was gutsy.

We were all paralyzed by these various class and race divisions and common sense was not prevailing from any point of view. It was a total snapshot of that ‘90s awakening. There was a real pushback against hidden and ingrained racism in media and entertainment and suddenly, there were great African American directors and writers exposing the undercurrents in society’s. The story was legit; I was terrified when they broke in.

You did an amazing job depicting those little lies you tell yourself when the man you knew as Mr. Perfect becomes an asshole. And to surf away the pain was really beautiful.

Surfing was so smart. I always wanted to do it, and I live by the beach so why not? And it was going back to the scene of the crime, where he first left me in the water. So it was physically like getting back on the horse, and this time instead of being that passive female character, “Oh come save me”—which is fun to be in, I can’t deny it, we have all these fairy tales when we’re growing up. “He’ll rescue you and make it all better.” But when you actually take the steps to be in control yourself and gain a sense of confidence in the environment that you would have looked to a man to fulfill, it somehow heals you in an evolutionary way. That’s how a human animal is supposed to work. If you nearly get attacked by a panther, you can’t hide in a cage forever, you have to get the heck out. And you get wiser and better.

RELATED: Devo Made Us Watch Their Own Personal Version of The Office