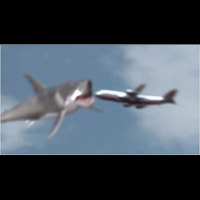 The beach: an ideal spot for carefree fun, surreptitious ogling, and… gut-churning terror? Every summer, the Discovery Channel provides shark fanatics and scaredy cats alike with the coolest footage of soaring sharks as well as the most terrifying ocean-predator tales. This year marks the 25th anniversary of Shark Week, and the cable network is going big. Running August 12-16, the programming slate includes MythBusters’ Jawsome Shark Special, Great White Highway, and Shark Week’s 25 Best Bites. For those who aren’t ready to move onto Fuzzy Kitten Week (not a real event, but we wish it was), here are five flicks to celebrate aquatic terrorism and get you in a great white mood.

1. Open Water (2003)
What could be more fun than watching people struggle to stay afloat and not get ripped to pieces in the middle of the ocean? Based on “true events,” this film about two stranded scuba divers will definitely turn water babies into land lovers.

3. Shark Attack 3: Megalodon (2002)
If you’re a die-hard shark fan, avoid this movie: The sharks err on the side of laughable instead of terrifying. But if you fancy absurd dialogue, Shark Attack 3 takes the cake. Actor John Barrowman wins the gold for best ad lib in a movie. We don’t want spoil it, but you’ll know it when you hear it.

4. Mega Shark Versus Giant Octopus (2009)
Shark Week is renowned for “Air Jaws,” a segment that features great whites breaching the water and chomping bait. Similarly, this movie is renowned for an epic scene that takes the concept to a more absurd level: sharks breaching the atmosphere. Step aside, Jaws. The massive predators of the film’s title duke it out for sea-world supremacy. Why? Because they’re enormous and they can.

5. Deep Blue Sea (1999)
LL Cool J and Saffron Burrows star in what would be a typical science-gone-awry flick were it not for its nihilism and sheer absurdity. A team of researchers on a rig in the middle of the ocean are terrorized by their super smart (and super angry) research subjects. Bonus: As the film’s end credits roll, viewers are treated to a rap song—from a shark’s POV.

If you’re hungry for more, try Into the Blue, Thunderball, and the Jaws saga (specifically the ridiculous Jaws 3). Anaconda and Mega Piranha are also genius train-wrecks if you want to be terrorized by (read: laugh at) other cinematic predators.