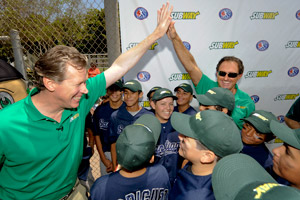 Subway’s mission, to help inner-city kids live actively and eat healthily (they’ll use the profits of an EBay auction on August 20 to build baseball fields for underprivileged inner-city kids), resonates with their spokesman Jared Fogle who has participated in the tour since 2005. His own little league career was cut short by childhood obesity. However, with the help of a few thousand turkeys on whole wheat with Swiss, Fogle is playing baseball once again; he threw the first pitch for the Dodgers in 2003.

On Saturday, it was Hershiser, the record-setting pitcher for the World Series Champions in 1988, who took to the field, modeling pitching and fielding strategies to Culver City’s team of starry-eyed twelve-year-olds. And yes, they knew exactly who he was. “When I can help them, their eyes light up. The light bulb moment for a young man is amazing,” Hershiser said. A father of two, he paced in front of the Culver dugout, calling out advice and support like a dad—only Hershiser really knows what he is talking about. “Baseball is the only sport where dads still think they know best,” he said, advising that young players that show promise should be taken to professional coaches.

On the La Cienega fields, though, parents were uncharacteristically quiet—until the end of the game, that is.  After the fourth inning, a swarm rushed to the field, pens raised above stark white baseballs and flashing cameras.

Fred Lynn, a center fielder for the Red Sox in ‘70s and the Angels in the ‘80s, coached Santa Ana’s team Santiago. In support of the urban initiatives provided by Subway, Lynn remembered his own “rough and tumble” neighborhood as a child, where no local field existed until he was ten. “My dad and a bunch of the dads in our area built my field,” he said, adding, “We were scrambling to get anything to throw—ping-pong balls, tennis balls, you name it.”  Lynn knows that low-income neighborhoods often lack fields or their fields suffer neglect. Consequently, kids cannot practice regularly if at all, and they are more prone to injury; Lynn himself suffered numerous injuries during his MLB career.  No wonder he joked about using me for foul-ball protection.

After the game (Santa Ana beat Culver City, 2 to 1), the kids inhaled Subway kids’ meals, where apples and milk have replaced cookies and soda—and Hershiser talked Major League shop. The Dodgers have been oh-so-close to a National League Championship two years running, but he sees little hope for a 2010 True Blue World Series. “When we won the World Series in ’88, we had talented young players and then added more,” he said. “The Dodgers took a step back in their roster this year, and to make it you have to step up.”