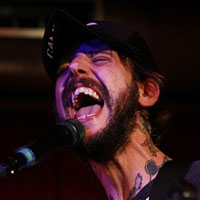 Some bands are enjoyable in concert. Others, like Band of Horses, are revelatory. If you missed their recent show at the Troubadour and are feeling bereft about the cancellation of the Railroad Revival Tour (there’s a replacement show on Oct. 27 at the Warner Grand Theatre in San Pedro), tune into KCRW this morning. Sometime during its three-hour block, Morning Becomes Eclectic (9 a.m. – noon) will feature a show recorded by the Seattle/South Carolina quintet a few weeks ago at Apogee’s Berkeley Street Studio.

With no less than 17 guitars in their arsenal (we counted), the band pounded through two short sets, the first an acoustic one that included striking versions of songs like the aching “No One’s Gonna Love You” off their 2008 album, Cease to Begin, and the more recent barroom stomper “Electric Music.” They closed with “Is There A Ghost,” taking a song with only three lyrics and building it into a thundering wall of sound. If you haven’t heard this song performed live, you haven’t really heard it.

When asked what he had learned from previous albums, lead singer Ben Bridwell replied, “Aside from putting a third chord in a song, which is always awkward for me, to just play an acoustic guitar and see the bare bones of a song.” He chatted about Mirage Rock, their fourth and newest album, which was recorded by veteran producer Glyn Johns (The Who, Led Zeppelin, The Rolling Stones and more recently Ryan Adams). Bridwell said it has mostly live vocals “mistakes and all.”

There weren’t many of those during this show and if there were, that’s where the beauty resided. Bridwell’s voice was crystalline, imbued with just enough choppiness to make him sound like a rogue choirboy. The electric set sounded more like the band’s recordings but even here the songs had an added depth that made them seem new. Standouts included “Knock Knock,” “The Great Salt Lake,” and their most insistent track, “The Funeral,” a touchstone that was anything but funereal, leaving the crowd jubilant.