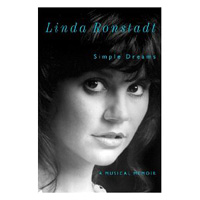 I had always hoped that Linda Ronstadt would share her story. A Grammy Award-winning and platinum album-selling female rock pioneer, she was a regular during the early ‘70s at the Troubadour and saw the start of a multitude of musical careers including The Eagles, The Doors, The Byrds, Jackson Browne, James Taylor, Kris Kristofferson, Janis Joplin, and Warren Zevon. Plus, she has a stellar set of pipes and huge vocal range. I was thrilled to hear she had written a memoir, Simple Dreams (titled after her landmark 1977 album) and was hoping to read some gossipy stories about that era of California music history—and the men in it. What I came to realize is that this isn’t a memoir about sex, drugs, and rock ‘n’ roll, it’s a memoir about music.

Although initially a little disappointed that there were few truly personal anecdotes, I found it refreshing to read about how she came to record her albums. Yes, she dedicates one paragraph to dating Governor Jerry Brown, listing the reasons they wouldn’t have worked out, but beyond that she stays mum on the romantic front, except where the men in her life influenced her music.

Growing up in Arizona in a musical family, Ronstadt sang Mexican ranchera songs in four-part harmony with her parents and siblings while listening to old time string, country, and American jazz standards on the radio, and opera and classical music on her grandparents’ Victrola. She says the music she heard in her parents’ and grandparents’ homes before she was 10 provided all the material she needed for her entire career.

After visiting Los Angeles in the mid-’60s, she was mesmerized by its emerging folk rock sound and decided that’s where she needed to be. She had her first hit, “Different Drum,” with the band The Stone Poneys and it launched her solo career. In 1977, Time magazine dubbed her the “Queen of Rock,” a label she struggled with since she considered herself more of a country singer. What came after the stardom is what the book is really about.

Ronstadt wanted to learn how to sing all of the styles of music she had heard during her youth. She was one of the first performers who dabbled in different genres in a way that was both innocent and strong-willed, not caring that record companies thought she was crazy. Whether it was performing on Broadway in the Pirates of Penzance, playing with Nelson Riddle’s orchestra, or releasing traditional ranchera albums sung in Spanish, she proved the record companies wrong again and again, selling millions of records in different genres, and winning a multitude of awards including seven Grammys, a Latin Grammy, an Emmy, and an American Latino Media Arts Award as well as Tony and Golden Globe nominations. Simple Dreams delves into the music of Ronstadt’s childhood and how it shaped her and how all of those different projects came about.

Yes, the Los Angeles anecdotes are there. A Venice beach roller-skating pal once brought a friend to go skating, introducing her only as Leslie; Ronstadt found out later she was Leslie Van Houten of the Manson family, out on bail. Or how Brian Wilson, newly single, drove around with his laundry in his car and she took him to the Laundromat. Or how the Eagles worked out the harmonies to “Witchy Woman” in her apartment on Camrose Place near the Hollywood Bowl. Or how Lucy’s El Adobe has her favorite Mexican food in town. There are stories comparing the music business to an Escher illustration and how she struggled as a woman in a predominantly male industry. But her love of music, the joy of singing with people she admired (Emmylou Harris, Dolly Parton, Neil Young, Aaron Neville, Nicolette Larson, Rosemary Clooney, Ruben Fuentes, the McGarrigle sisters, to name just a few), and the determination with which she took creative risks is what leaves a lasting impression.

The memoir comes out at a sad turning point in Ronstadt’s life. She recently revealed that she has retired from performing. Don’t expect a Streisand-style comeback; Parkinson’s disease has left her unable to sing. But that isn’t how she ends the book (in fact, she never mentions it). Ronstadt wraps up the story by focusing on her family. How her two children both play instruments and have an active interest in music. How her siblings, cousins, and their children in Tucson still gather monthly to sing family songs. How they play professionally in various bands. You come away respecting someone who simply loved to sing and used her abundant natural gifts any way she could. Ronstadt may no longer be performing, but we have a huge and wonderful library of ways we will forever get to hear her remarkable voice.