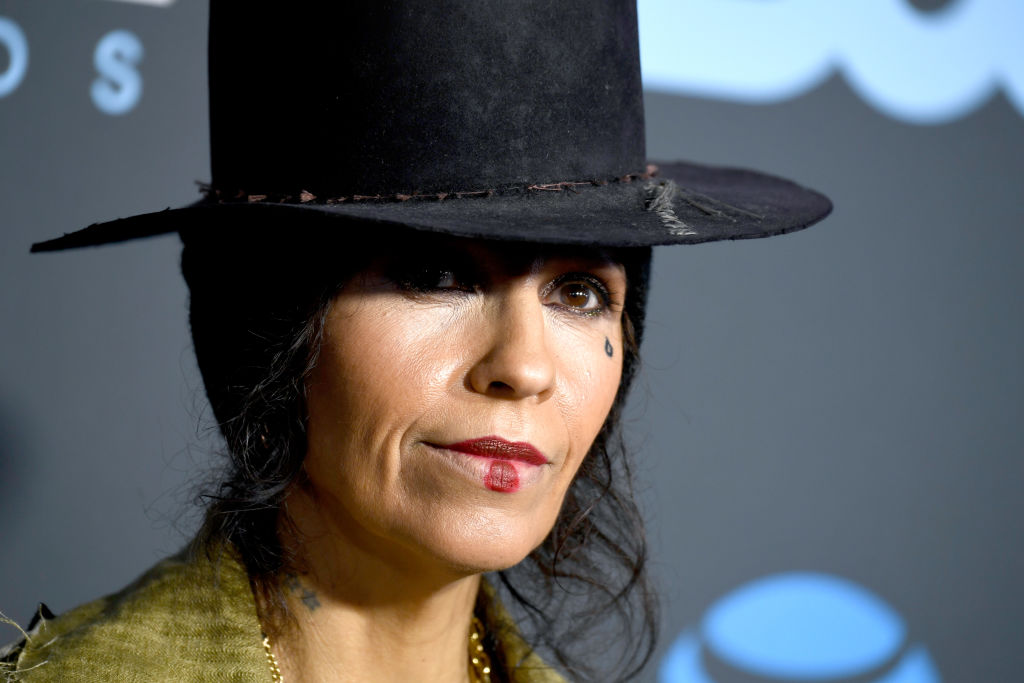 Linda Perry could make music industry history on Sunday night. The former 4 Non Blondes front woman is the first woman to be nominated on her own for the Non-Classical Producer of the Year Grammy since 1999–and no woman has ever taken home the award.

“I am hoping that my nomination is bringing some awareness to how underrepresented women have been in this category,” Perry says. But she acknowledges that adding a trophy to her shelf isn’t enough on its own to level the playing field for women who want to pursue careers as record producers.

“We can’t make change until we change the sexist programming. We are making slow movements, but people have to reprogram their assumptions,” she says. “Every day, I drive down the same route to take my son to school. I go up, I go down, I turn left at this one street, and I arrive at the school. I don’t know if that’s the best route, it’s just the one I got accustomed to, so I keep repeating it over and over. We’re all guilty of ‘going a route,’ because it’s easy and it works. But what we need to do is make people see the possibilities to be found when you go down different routes.”

Perry’s own journey to becoming a studio superstar began during the recording of 4 Non Blondes’ 1992 album, Bigger, Better, Faster More! The band’s label, Interscope, had hired David Tickle to oversee production, but he and Perry clashed.

“My ears kept hearing things. I was very green, but I kept pointing things out. Like, I would tell him, ‘My guitar sounds really badass in the live room, but when I come in here, it sounds really thin and small and affected.’ And he would just say, ‘Don’t worry about it, you go be a singer, focus on what you need to do.’ He was kind of undermining me and my ability, but I didn’t fully understand that yet.”

With no formal training or experience in production, Perry returned to the studio on her own to continue tinkering with the album’s sound. The result was “What’s Up?,” a single written and produced by Perry (though she was not allowed to take a production credit on the track), which became a worldwide hit.

“People have this idea that you’re the girl, the singer. They assume you’re going to say ‘That guy said I should just be a singer, and he must know, so I’ll just follow that path,’ and that’s what happens. You’re told that you’re this, not that. And a lot of people believe it. But I just couldn’t live life being told I’m not what I know I am.”

When 4 Non Blondes reconvened in Interscope’s L.A. studios in 1994, tasked with recording a follow-up to their surprise hit, the sessions were fraught. Before the album was completed, Perry walked out, deciding it was time to focus on a solo project. While her solo debut, In Flight, wasn’t a commercial success, it provided a valuable opportunity for her to build her chops as a producer. Bill Bottrell, a veteran producer who had worked with Michael Jackson, Madonna, Tom Petty, and Sheryl Crow, encouraged Perry to explore what she could do in the studio

“Bill Bottrell was very, very generous with his experience and knowledge,” she recalls. “He was patient with me just constantly running around the studio, asking questions, grabbing things, pushing buttons and knobs. He became the professor and I was the student, and he taught me everything he could. He just threw me in front of the board. I said, ‘Ok, so what do I do?’ and he told me ‘You keep turning the knobs until it sounds good to you.’ because It really taught me a lot technically, but it also taught me that I can learn every bit of a skill from someone, but I’ll never be them and they’ll never be me, because they don’t have my ears.”

Soon Perry turned her focus to producing for other artists, collaborating in the early 2000s on breakthrough albums for P!nk and Christina Aguilera, and going on to work with Gwen Stefani, Celine Dion, and Alicia Keys, among many others. The recent body of work that garnered this year’s Grammy nomination includes Dorothy’s 28 Days in the Valley, the soundtrack for the military documentary Served Like a Girl, and her collaborations with Dolly Parton and other artists for Dumplin’.

“What I’m looking for with an artist is to create a space where they be vulnerable. I want them to reach a little deeper,” Perry says about what makes her process as a producer distinct. “When I go into the studio with an artist, I don’t care if we write a hit song or not. I’m not that kind of writer or producer. I just want to do something real. I want to make something honest. Most of the time, honesty is never going to be the hit single. It’s going to be the album track. But, you know, I’ll base my career on writing really good album tracks. I’m happy with that.”

For her, the job of a producer is less about cranking out a polished product, and more about two creatives exchanging ideas.

“My intention is ‘Are they going to learn something from me? Am I going to learn something from them?’ Because I can give them something that’s way better than a hit song, I can give them some bit of insight or information that is going to last them the rest of their career,” she says. “The thing I can teach is to show them the way to the deeper self, how accessing that deeper emotional self can create masterpieces if the artist is willing to go deep enough. I like to educate people in some way and maybe that’s because I wasn’t so educated myself, in the traditional sense.”

Perry, who grew up in Massachusetts before moving to San Diego as a teenager, discovered her passion for music at an early age, but despite her creativity and intelligence showed little aptitude in the classroom.

“I was a failing student in school. I dropped out in eighth grade. My mom begged me to go back to school, but when I did, they put me in ninth grade for some reason, and that was even farther beyond what I could comprehend. I just wasn’t good and I had to get out of school. I still don’t know about math, or biology, or any of that stuff, and I’ve always had an insecurity about that,” she shares. “I’ve never trusted my head, because I never thought I was smart enough.”

That insecurity has stayed with Perry. Even as she achieved glass ceiling-shattering success in the recording industry, a sense of Imposter Syndrome has continued to eat at her.

“I work all the time and I’m constantly moving because I never feel like I’m good enough, I just move, move, move, to keep ahead,” she says. “People could tell me all day long that I’m awesome, they could give me every ‘lifetime achievement award’ today, but it doesn’t matter. I’ll still wake up tomorrow feeling like I’m a slacker. There is something almost devilish, this game that goes on inside.”

At 53, Perry thinks she might finally be approaching a place where she’ll feel at peace with herself and her achievements.

“Maybe the past six or seven months, there’s a light flickering with the hope that I might reach this thing, whatever it is I’m searching for. Because I think if I can, maybe I will for once feel like I’m good enough. And I’ll become the one who can be an inspiration to my son and to people in my life. I’ll feel like I made a difference.”