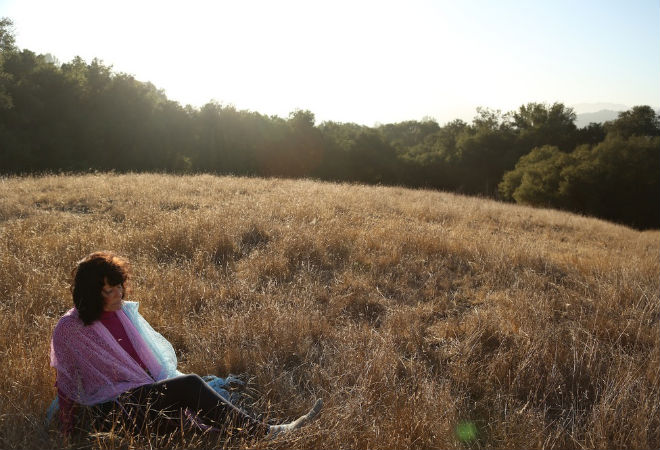 While driving down the Ventura freeway at night sometime in the late 1960s, Linda Perhacs had a vision in which she saw music emblazoned on the night sky. That psychedelic experience is the key to understanding Perhacs’s strange career. In 1970 she was a dental assistant who was writing songs at her kitchen table while going through a divorce. She had never recorded anything when one of her dental patients, composer Leonard Rosenman, produced her album Parallelograms. The album’s eleven tracks sound like the work of a West Coast cousin of the similarly recovered Scottish folk phenomenon Vashti Bunyan, if she had spent a lot of time hanging out with Joni Mitchell in the canyons and hills of Southern California.

“I told Leonard, I wanted to create a three-dimensional sound sculpture on the album based on what I had seen that night,” Perhacs says. Reluctance from her label Universal Music to promote the album ensured that Parallelograms faded into obscurity. Three decades later, a disparate set of popular offbeat musicians including Daft Punk and Devendra Banhart began stumbling on Parallelograms, the legendary lost album of L.A.’s psychedelic folk scene. Today, after almost 44 years, Linda Perhacs is finally releasing her follow-up.

Like Parallelograms, The Soul of All Natural Things is another sampling of Perhacs’s indelible voice, ear for arrangements, and ability to create vast soundscapes using only voice and subtle instrumentation. Talking to Perhacs, now in her early 70s, is like listening to her music. She is a soft-spoken and eloquent woman whose words—like her songs—have an enigmatic quality.

“I started going on solitary walks at age four, just taking in nature,” says Perhacs, who was born and raised in Mill Valley north of San Francisco. She has always preferred a solitary contemplative life in nature, which is the primary reason why she never thought about a music career while growing up. “I didn’t want to be famous or on a stage.”

Although Perhacs says that music was “in her” from the age of five, she wasn’t encouraged to pursue music as a child. After accepting a scholarship to USC, where she studied to become a dental hygienist, she finally found a place where her creativity flourished. “My husband at the time had discovered Topanga Canyon, because he had a very large collection of birds,” she explains. Perhacs still works as a dental hygienist and still lives in Topanga Canyon, crediting it as a great source of inspiration. “I felt like for the first time I could take my long walks, write music, and think deeply without adults telling me that I wasn’t being serious.”

The composer and singer was also inspired by the music of the 1960s and ’70s, especially that of neighbors like Crosby, Stills & Nash, The Eagles, Joni Mitchell, and Linda Ronstadt. “We were all listening to them for one important reason,” says Perhacs. “They were bringing in so many new ideas, none of which came from our parents. We were opening our lives to love.”

Perhacs met Leonard Rosenman, a composer for TV and film, when he wound up in her chair at the Rodeo Drive-adjacent dental clinic where she then worked. Intrigued by the quiet woman who cleaned his teeth, Rosenman listened to a couple of her demos and proposed a working relationship. When she shared her vision with Rosenman, “He just stood there,” Perhacs says. “I was afraid he was going to say that I was nuts, but he said, ‘If I came up with an idea this creative two times in my life, I’d be thrilled.’” At the same time he warned Perhacs that they’d have to fly under the radar with some of the more experimental tracks, as Universal—where they had already signed a deal—wouldn’t take kindly to it.

“Universal sent the completed album to New York, where it was to be pressed, and that’s where the trouble started,” Perhacs recalls. The album had been mastered to suit AM standards, which according to Perhacs, made it sound as if it was being played over a telephone speaker. Universal demanded that all copies be sold before they would even consider a second press, and Perhacs retreated to the woods. “I’ve always preferred remote loneliness, a contemplative life, and loving someone deeply,” she says. “Those were my priorities, so I walked away.”

When Michael Piper, who runs the New York City based label Wild Places, started reissuing Parallelograms in the early 2000s a new generation of listeners armed with internet connections and an affinity for obscure treasures, reconnected with Perhacs’s music, and the humble singer started to consider a comeback. In October of 2009, Mark “Frosty” McNeill of nonprofit radio collective Dublab set up a performance of Paralellograms at REDCAT, featuring other performers covering the songs and a couple of tunes from Perhacs herself. “It was the first time I had ever been on stage and it also brought me in contact with people from the Echo Park and Silver Lake scene, which I really like,” says Perhacs. “It’s so very independent. There are no black-suited studio guys telling you what to do.”

The Soul of All Natural Things, Perhacs’s new album, is the product of the friendships she forged with a new generation of independent music producers in Los Angeles. “That evening at REDCAT was the beginning of a musical sisterhood between Julia Holter, Ramona Gonzalez, and I,” Perhacs says. Holter and Gonzalez (who performs under the name Nite Jewel) are both featured prominently on the new album.

As for the future, Perhacs won’t wait 40 years to record again. “I told Asthmatic Kitty that I wanted to collaborate with Sufjan Stevens, who started the label, and I also really want to collaborate with Devendra Banhart again,” she says. But don’t expect her to put down her curettes and metal scalers. “My hope for the future is that I can split music with my day job about half and half. That way there won’t be too much dentistry.”