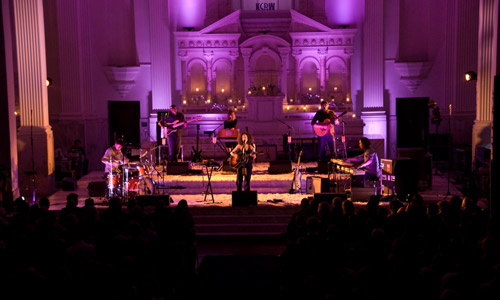 It was just past 9 p.m. on Tuesday night, and Corinne Bailey Rae was sitting, cross-legged on a small white chaise, her signature ringlets perfectly framing her sweet face. She had already namedropped influences like Kurt Cobain and Billie Holiday—singers whose voices had texture and personality, like hers—in her recorded discussion with KCRW Music Director Jason Bentley about her new album, The Sea. Bentley shifted slightly in his seat, then asked the question that had been on my mind all evening: “All of our hearts go out to you,” he started, referring to the tragic death (reportedly of a drug overdose) of Rae’s husband, Jason Rae, in 2008. “Was writing [the album] therapeutic?”

“I don’t think it was,” she said flatly, before tacking on a less personal thought about how popular music should speak to all aspects of life. “I thought it might be useful,” she allowed.

For the sold out crowd that had packed Vibiana, the former Archdiocese cathedral in downtown Los Angeles that KCRW filled with votive candles and washed in blue light for the special event, Rae’s musical expression of love and loss was useful, and then some. The man sitting in front of me let out a great sigh every few minutes. The woman next to me bobbed her head to the beat of every song. It’s a testament to Rae’s soaring, rasp-tinged vocals that after only a few moments I forgot how uncomfortable my folding chair really was and was able to stop reacting to the people who were craning their necks and blocking my view (no matter how beautiful a concert setting, Vibiana does not have raised seating). Rae’s band drowned her out on “Closer,” but the crowd cheered for it loudly, and Bentley later named the track his new favorite song. To hear highlights of the concert—hopefully including Rae’s performances of “Are You Here” and “Like A Star,” during which she sounded downright ethereal—tune in to KCRW’s Morning Becomes Eclectic this Friday.