Home Holiday Lights on the Water 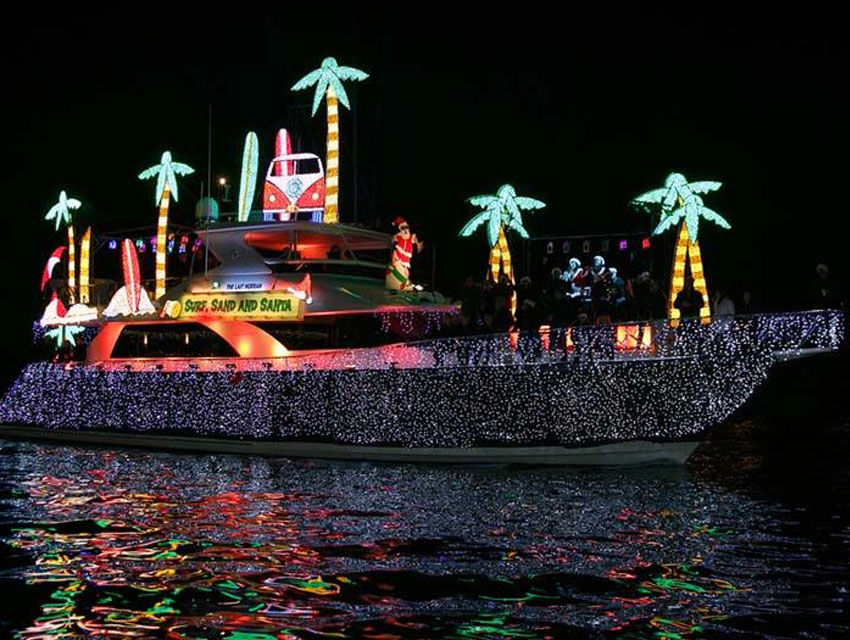 In Southern California we experience a different kind of winter wonderland. Year after year locals and visitors gather around waterfronts to admire the sight of vessels strung with lights and festive décor. Nowhere beats L.A. but if you’re up in the Bay Area be sure to check out the Fisherman’s Wharf Lighted Boat Parade or if you head south you can catch the San Diego Bay Parade of Lights.

King Harbor Boat Parade
Saturday, December 13 at 5:30 p.m.
King Harbor, Redondo Beach
This annual event harnesses the joy of the holiday season with lights and ornaments. Full-sized sailboats, powerboats, and outrigger canoes will cruise along the coast in this year’s parade, which is themed “King Harbor Lights.” More information.

Marina del Rey Boat Parade
Saturday, December 13 at 6 p.m.
Marina del Rey
For more than 50 years Marina del Rey has hosted one heck of a holiday party. The festivities begin with a fireworks display, followed by a fleet of boats decked out in holiday regalia. Music blares from speakers along the route and there’s live bost-by-boat commentary. More information.

Naples Island Holiday Boat Parade
Saturday, December 13 at 6 p.m.
Naples Island, Long Beach
“Light Up The Night” is this year’s theme. Attendees can admire boats dolled up with seasonal decorations while listening to holiday songs performed by carolers around the island. More information.

Huntington Harbour Boat Parade
Saturday, December 13 and 14 at 5:15 p.m.
Huntington Harbour, Huntington Beach
For more than 50 years this special event has donated its boat entry fees to the Philharmonic Society of Orange County. No wonder it’s known as the “Music in Paradise” Boat Parade. Spectators can view the show from locations like Trinidad Park and Peters Landing Marina. More information.

Newport Beach Christmas Boat Parade
Wednesday, December 17 – Sunday, December 21 at 6:30 p.m.
Bay Island, Newport Beach
Newport Beach, which launched its parade the early 1900s, is credited with hosting one of the oldest Christmas boat parades. For five consecutive nights yachts, boats, kayaks, and canoes will show off their holiday spirit as they cruise around the harbor. More information.

Dana Point Harbor Boat Parade of Lights
December 5-6 & December 12-13 at 7:30 p.m.
Dana Point
View this boat show from anywhere in the harbor. You can even enjoy the sights from the water; Dana Wharf Sportfishing offers boat rides during the parade. More information.

Channel Islands Harbor Parade of Lights
Saturday, December 13 at 7 p.m.
Channel Islands Harbor, Oxnard
This parade begins with an appearance by Santa Claus as he flies across the sky. There will also be children’s activities and an artisanal market located at the Marine Emporium Landing. More information.

Santa Barbara Parade of Lights
Sunday, December 14 at 5:30 p.m.
Santa Barbara
Festivities will begin at 3 p.m. at Santa’s Village on the City Pier. The parade begins with boat presentations at 5:30 p.m. and finishes with fireworks at 7 p.m. Some of the best viewing locations include Stearns Wharf and SB Breakwater. More information.

Don’t Do This at Home: A Stunning Recap of Viral July 4 Fireworks Mishaps