Home Uncategorized Life Through The Lens Of Faith: A Q&A With Pastor Tim Chaddick 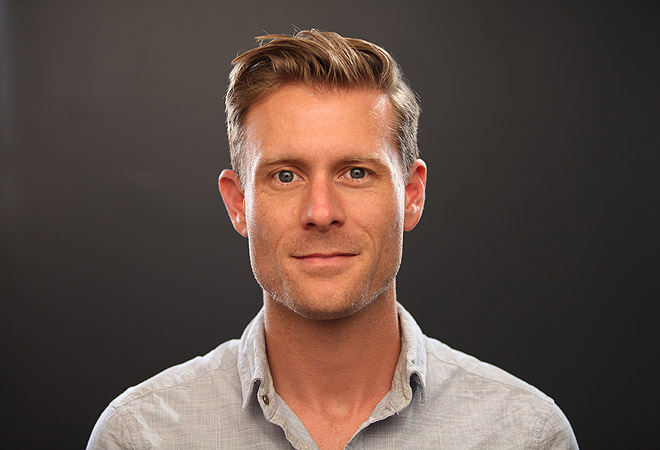 No one could accuse Tim Chaddick of being a substandard orator.

The head pastor of Hollywood-based church Reality LA (the church I happen to attend) teaches the Bible to a congregation of 3,000 men and women at three different Sunday services most Sundays out of the year. His hour-long sermons can at first seem intimidating—having grown up in a church where the sermons clocked in at 20 minutes flat, I was skeptical I’d be able to sit through one—but as it turns out, their lengthiness is inconsequential: Chaddick’s fervor and breadth of knowledge could engage even the most obstinate listener, but it’s the magnetic wit and unencumbered enthusiasm for Jesus brought to each message which captivates his audience (and keeps them coming back). And now, he can add “author” to his resume.

Last year, Chaddick preached a series on the book of Ecclesiastes to his Reality LA church family. In early September, he released the title Better: How Jesus Satisfies The Search For Meaning in the hopes of bringing Ecclesiastes’ message to a wider audience. A coffee-fueled tete-a-tete led to the below interview, in which Chaddick attempts to explain cosmic anxiety, superficial Christianity, and the true meaning of life (yes, really).

What inspired you to write this study of Ecclesiastes?
Ecclesiastes resonates with me because it is an accurate description of life without the lens of faith. It’s a super honest book, more honest than the stance even some agnostics are willing to take. I think the scandal of it is what made it so interesting to me. Professor Peter Kreeft once said that Ecclesiastes is the question to which the rest of the Bible is the answer. At its core, Ecclesiastes asks readers to contemplate life without God. And if we’re honest, life without God is completely meaningless. You might be a really neat person, and then get cancer, and then what? If there’s no God, there’s no ultimate justice. This book addresses all of these questions in a fresh way.

In Better, you say, “[God] wants us to fear—to rebel against—the notion that life is meaningless. He means for us to shudder with cosmic anxiety.” That statement reminded me of C.S. Lewis’ quote: “If we find ourselves with a desire that nothing in this world can satisfy, the most probable explanation is that we were made for another world.”  How do you go from thinking life has no meaning to shuddering with cosmic anxiety?
If we’re really honest, we should shudder at the notion that if this life is all there is, then life is pointless. If our origin is random, and if our end is random, then everything in between is random. What is the point? If the point is literally a blip on the radar, it might cause you to freak out a bit. But the flipside of that is a positive: that everything you do does matter. I don’t think some Christians have even felt the full weight of that, which would make them discover and appreciate more the truth of what the Christian Gospel means in their life.

Would you ever equate Ecclesiastes to Pascal’s Wager, which makes the argument that it is foolish not to “bet” on the existence of God regardless of tangible proof?
The Preacher, as the narrator of Ecclesiastes is referred to throughout the text, does a natural, intuitive version of that. Ecclesiastes gets there, but it gets there by looking at life and coming to some tough conclusions. You’re functionally living your life as if certain things actually matter, but do they? This book is geared toward practical secularists, people both in the church and outside of the church who are living as though what is seen is what really matters and there’s nothing underneath or nothing beyond. In the introduction to Better, you say, “If ever there was a treatment for superficial Christianity, Ecclesiastes is it.” Can you talk more about superficial Christianity?
A lot of people who would identify as Christians have not themselves wrestled with the way Jesus changes their lives, their view of money, their friendships and relationships. Some haven’t even wrestled with the fact that death is real. For them it’s just, Cool, Jesus saves me from sin, moving on. The Gospel says that truth, health, and redemption are found in life, but if you haven’t dealt with the questions first, then you won’t appreciate the answer.

These are tough pills to swallow for someone who hasn’t considered Jesus or Christianity to the fullest. How would you make it palatable to the skeptics in your church?
If someone’s first instinct is to push back, I would respond with a question. That’s part of the interesting thing about the conversation; as a pastor, I’m so used to being on the receiving end of questions that it’s strange to say, do you mind if I ask you a few questions about what you believe? I identify with that personally, and I ask them that in all humility and sincerity, because I was there. What do you believe about death? About justice? If there literally is nothing after death, then what makes a life bad or good? Better is an answer to these ground level questions.

I’m trying to bring it out of the theoretical and get down to the functional. As in, if you’re going to live for money, what proof do you have that money is the most important thing in life? Why are you here in L.A.? What do you hope to get out of that? Where do you think it’s going to go? If everything under the sun is all there is, then that’s how the story ends. Roll the credits. Which is depressing, but that’s the point: people don’t look at the alternative. If Jesus Christ actually rose from the dead, everything changes, because then He can say, I went to the grave and I defeated it. Been there, did that, got the T-shirt—now I’m going to tell you more about what actually happens after you die.

One thing I’ve noticed about Christian literature is that it tends to spoon-feed its readers in terms of the take-away. In regards to a writing approach, did you take that into consideration?
Sure. And I think one of the main factors is the audience. I couldn’t help but write with the people I come into contact with in mind. Other authors might have a broad audience in mind, maybe because their influence is very broad, whereas I live in L.A., so my approach was shaped by the people I come into contact with here. I couldn’t address all of their questions, but certainly the flavor of the book, the angle of it, was formed and shaped by the people I interact with. Some of them have really amazing questions, which is why I dedicated it to my church family. I think a lot of balance was brought to the book because of that. It probably would have been a different end result had I not received feedback from them.

In Upon This Rock, an essay that originally appeared in GQ, author John Jeremiah Sullivan writes, “Everything about Christianity can be justified within the context of Christian belief. That is, if you accept its terms. Once you do, your belief starts modifying the data (in ways that are themselves defensible) until eventually the data begin to reinforce belief. The precise moment of illogic is hard to isolate and may not exist…this is why you can never reason true Christians out of the faith. It’s not, as the adage has it, because they were never reasoned into it—many were—it’s that faith is a logical door which locks behind you.” What would you say to somebody who thinks in that way?
I would say that whatever belief system that person has is probably a faith system that does the exact same thing [as Christianity]. You cannot scientifically prove that human beings are more valuable than rocks. That is a belief system. Whatever you claim to believe is then shaping and interpreting the data. You are now looking at the data through a particular lens. Most people have faith, but faith in what?

The first time I read that passage I was so intrigued by the concept, especially the part about reasoning a Christian out of faith, because all of a sudden you’re looking at life through a God lens all of the time.
People often say to me, “You’re biased because you’re a Christian.” But they, too, are biased because they’re an atheist, or whatever it is they are. We all have our biases. The question is, will we go where the truth takes us?