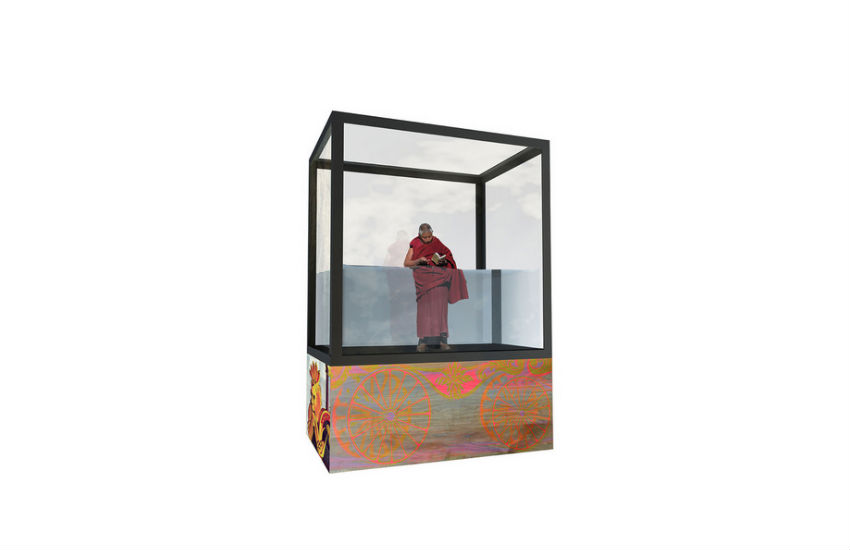 Artist Lars Jan has done that rare thing: created something that feels entirely new. HOLOSCENES: Quaternary Suite, Jan’s latest exhibit, which opened Sunday at Pasadena Museum of California Art, is an immersive video installation, comprising three large circular screens, where performers complete ordinary tasks—like dressing and undressing—under water. Viewers watch from the rear of a darkened gallery, while the action takes place on screens to the left, front, and right. Large cylinders, which appear to be just over five feet in diameter, are filled and emptied from below, while a camera films overhead, giving the audience a bird’s eye view of the performers inside. HOLOSCENES: Quaternary Suite will be on display until May 31. An artist talk is scheduled for February 22.

An hour long, the PMCA exhibit is separated into discrete segments, but viewers may enter or leave at any moment; HOLOSCENES is a non-narrative piece. It is also, it must be noted, a literal “hollow scene”—a synonym for the geologic term Holocene, the geologic epoch following the Pleistocene. Intended to raise awareness about the calamitous consequences of climate change, this punning title refers to the literal bareness of the work, which largely comprises nothing more than skin, water, and the plastic rim of the pipe.

The bareness forces viewers to contemplate how a catastrophic flood might strip us of the things that give our lives meaning. The work engages multiple political hot buttons: when performer Annie Saunders drags on a black head covering, suggesting a burkah or abaya, the artwork operates both as a concrete sensory experience and as an abstract theoretical inquiry—in other words, you can feel it and you can think it. Viewed either way, this is art you will sink into.

The effect of Jan’s piece is both beautifully intimate and exquisitely claustrophobic. The bodies of the performers—exhibited both naked and clothed—take on mysterious and dissociative qualities. The simple act of pulling on a boot is transformed into an act of dreamy difficulty. On one screen, performer Geoff Sobelle floats face-up with his hands in his suit pockets, while on the screen opposite he moves and spins in the nude. Humming, rushing, and thrumming sounds underscore the visuals, which sometimes flash or are illuminated by changing LED lights.

The exhibit at PMCA is one aspect of a larger multiplatform artwork, which comprises performance, visual artwork, video, and installation. Engaged with geology, climatology, and sociology, HOLOSCENES explores how humans have affected the world and how our world—with its rising tides—has now begun to affect us. How will we live in flood lands? Jan writes on the websites that accompanies HOLOSCENES that the project attempts to “embody the trauma of flooding.” In the video installation at PMCA, this trauma is expressed not only by the actual submersion of the performers in the tanks, but also by their lack of affect. Jan’s goal is not only to create unforgettable art but to capsize our attention, before we are literally capsized.

Why Is the Pasadena Museum of California Art Closing?