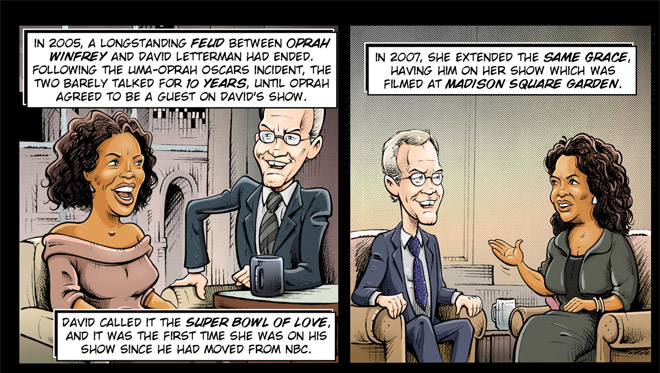 As comic book heroes go, David Letterman is an unlikely one. Then again, in Fame: David Letterman he’s not wearing a cape or leaping tall buildings in a single bound. He’s simply being his gap-toothed, crumudgeony self.

Written by CW Cooke and illustrated by Noumier Tawilah, the digital publication (available as a download for $1.99) looks like a comic book but reads more like a Wikipedia-in-pictures entry–while maintaining a fanatical devotion to all things Letterman.

There he is alongside TV heavyweights like Johnny Carson and Oprah. Though it doesn’t shy away from the controversies that have popped up during Letterman’s career (his widely panned Oscars hosting gig, cheating on his wife with his assistant), the book is ultimately an ode to the Late Night host’s triumphs.

Publisher and editor Darren G. Davis explains, “My goal is to tell the stories of all the people that were in the late night wars and then maybe combine them. I studied television in college and was fascinated by the world of Late night. Letterman has been cutting edge in that world.”

Ellen DeGeneres Opens Up About Being the Victim of Sexual Abuse