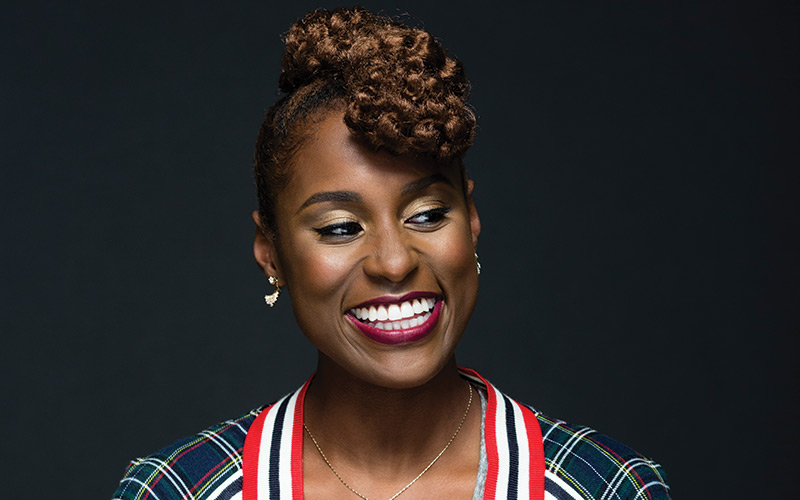 On the whole, Los Angeles isn’t hurting for champions of its greatness. Consider the city piecemeal, though, and a few of its neighborhoods could use more fans. Leading the charge is Windsor Hills-bred Issa Rae, who’s on an unofficial campaign to become the Woody Allen of South L.A. (her words, not ours). The 32-year-old is the cocreator, writer, and star of HBO’s Insecure, which she fought to have shot on location in Leimert Park, Baldwin Hills, and View Park. “I wanted to show a South L.A. that isn’t negative or absurdly hood,” Rae says. “There are affluent people here, and sometimes it’s all side by side. And I love that.”

Insecure is a natural evolution of Rae’s 2011 YouTube series, The Misadventures of Awkward Black Girl. The first season saw antiheroine Issa Dee (played by Rae) and her best friend, Molly (Yvonne Orji) confronting personal and professional traumas with Awkward Black Girl’s trademark awkwardness, plus a dash of passive-aggressiveness (Issa vents her frustration with coworkers, for example, by writing raps). The result is mostly funny, often heavy, but always smart. “In music terms,” Rae has said, “Awkward Black Girl is the mixtape, and Insecure is the album.” Here she talks interrobangs, bad brunchers, and the best day of her life.

One of your early pilots was called “I Hate L.A. Dudes.” Describe the worst L.A. dude.
He doesn’t try, he’s super into himself, and he always thinks he’s going to find better.

Rapper who could write the foreword of your next book?
Drake. He gets us. He gets me. He sent me a message telling me he watches the show. He’s a good writer, despite people coming at him for that.

Have you met?
No. Oh wait, yes! I did meet him! I’m tripping. I met him at a restaurant. It was the best day of my life. It was all an accident. I was late for a dinner meeting, and the person I was with was like, “Oh, there’s Drake!” and I was like, “Shut the FUCK UP.” The person I was with was like, “You like him? I’ll introduce you.” So then he did. And Drake came and sat next to me for at least three or four minutes. This was pre-Insecure, but I had already decided I was going to hide Easter Eggs of his lyrics in every episode.

There are Drake lyrics in every episode?
Yes, of season one.

Did he know? Is that why he messaged you?
I think he knew to a degree. One of his fan sites posted it and put it together.

You have a soft spot for ’90s sitcoms. Character you’d cast in Insecure?
I love the Gina-and-Pam combo from Martin. They’re so fun, and we’d have a great best friend duo situation.

Character you’d hate to brunch with?
Carlton from Fresh Prince. He’d be terrible. I’m very food focused, and I feel like he wouldn’t be. I’d take him to Toca Madera for a churro waffle, and he wouldn’t appreciate it, but we’d try to flip it.

Three female comedians you’d start an R&B group with?
Quinta Brunson. Yvonne—she CANNOT sing, but she’ll be the pretty one—the Victoria Beckham of our group. And Syd tha Kyd, for sure. She’s the only one that can sing. She’d carry us.

L.A. show you’d do an Insecure collab with?
Curb Your Enthusiasm. There’d be a lot of discomfort, a lot of miscommunication.

You were in Pharrell’s “Happy” music video. Three L.A. musicians whose videos you wish you could be in?
Kendrick. The Internet, but specifically Steve Lacy—I want to be Steve Lacy’s older video girl. He’s only 18, but I could do that. And then Frank Ocean, hands down. They’re all dudes. Sorry.

Non publicist-approved name for your future late-night show?
Fuckin’ It Up with Issa Rae. Or Bitch Why?! with Issa Rae. I like Bitch Why?! because you can answer why. And I like interrobangs, mostly because I just learned that word.