Home Uncategorized Let It Get Loud 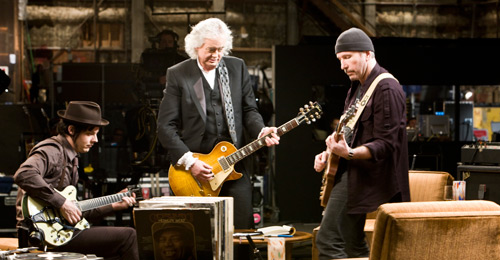 Ok I’m a music freak. Ask anyone who knows me. And I’ve fallen in love with my share of guitar players. So I might not be completely objective about a documentary about guitars, but no one can dismiss the brilliance of It Might Get Loud, the new documentary from Davis Guggenheim (of An Inconvenient Truth fame).

This artfully crafted film is about the guitar from the point of view of three generations of players: Jimmy Page, the Edge, and Jack White. I have always appreciated Jimmy Page— I have all the Led Zeppelin albums— but now I’ve joined the ranks of those absolutely in awe of him.  It’s worth seeing the movie just to see him put on an album (yes, vinyl) he loves and grin and groove to the guitar he’s hearing. And it’s worth it just to see the other two players (no slouches in the rock n roll stratosphere) watch him play.

Their stories, historical photos, playing styles, hometowns, and concert footage are skillfully interwoven in an homage to both the players and their approach to the instrument. Especially poignant are trips Jimmy Page and the Edge take back to places from their past—the Victorian estate where Led Zeppelin IV was recorded and the school where the Edge responded to a posting on a bulletin board to form a band.

This film is entertaining, but it’s also provocative—the selection of these three particular musicians as generational figureheads sparked music-circle debates even before screenings were held. Jack White’s inclusion in the film, to me, is completely appropriate. Is he the greatest from the current generation of guitar players? Maybe not, but his perspective on the instrument cannot be ignored. A friend didn’t agree.

So let the discussions begin: Go see It Might Get Loud (in theaters today) and let me know what you think.