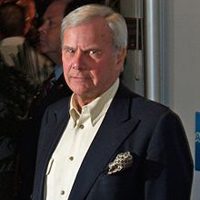 Broadcast news icon Tom Brokaw sat down with USC professor and political expert Marty Kaplan at the Writers Guild Theatre in Beverly Hills Wednesday for a discussion organized by Writers Bloc on topics ranging from the 2012 presidential election to grandparenthood. Brokaw stuck around after the chat to sign and sell copies of his new book, The Time of Our Lives. Here’s what we learned:

American Politics Have Become Acutely Partisan
The newsman cannot recall another time when the Democratic and Republican parties simply “went to their own corners of the room.”

The American Dream is at Stake
“The country has lost its confidence. People are saying, ‘I don’t think my children will have a better life.’”

The Tea Party Got Ahead By Playing By The Rules
“They got angry, they got organized, they got to Washington.”

One Person Can Move the Country Forward
The founder of Susan G. Komen for the Cure, Nancy Brinker, did it. So did the founder of Mothers Against Drunk Driving, Candice Lightner.

It’s Too Bad That Candidates No Longer Have the Freedom to Speak Freely
Brokaw recalled John McCain once endearing himself to a town hall audience with an off-color joke. That couldn’t happen today.

Lincoln Was An Early Blogger
The 16th president sometimes wrote derogatory articles about an opponent in the political press under a pseudonym. According to Brokaw, it’s something Lincoln regretted.

America Went To War On a Credit Card
“No [financial] sacrifices were required at home.”

Education Counts
“We cannot get forward as a country unless we raise everyone’s level of education. It’s going to take everyone.”

Climate Change
It’s happening, it’s real, and those are “the right words to call it.”

Tom Brokaw Isn’t Particularly Handy
Hid dad could build anything. “It was not genetic.”

Stand Up Straight
Brokaw didn’t touch on the subject of posture, but he sure did cut a striking figure as he made his way to the stage.

Writers Bloc will welcome Elmore Leonard next, on Jan 17.