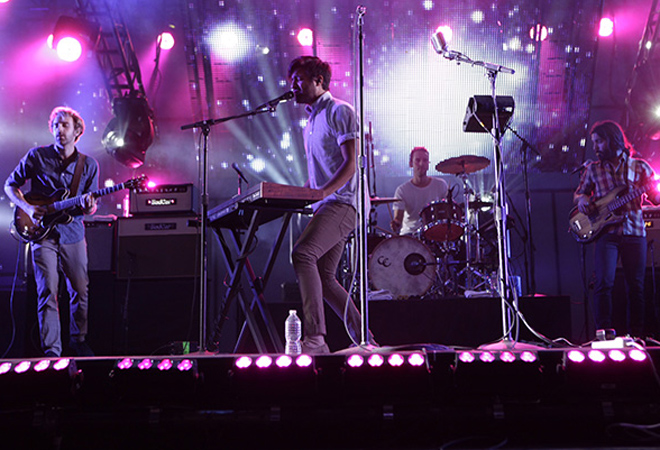 If there’s anything Young the Giant needs, it’s a break. Not from the pressure of playing massive festivals or a record label itching for new material, but from the pressure they put on themselves while recording their sophomore effort, Mind Over Matter. Finally, frontman Sameer Gadhia could take a breath as we sat backstage at Jimmy Kimmel Live yesterday, the day of their record release.

“This is sort of a full circle moment,” Gadhia says. Three years ago, Kimmel was their first late-night appearance and the performance helped launch their career, but originally they weren’t even booked to perform. “I was on vacation in this cabin in the middle of nowhere in Germany. There was a cancellation and I got a call overnight that I needed to come back. The commute was better this time.”

Mind Over Matter, which came out yesterday, is a fitting title for the Irvine band, which battled growing pains during the three years and six tours since the release of their self-titled debut. (Early chart-toppers “My Body” and “Cough Syrup” still get radio play.) This time around, the normally laid-back Californians knew they wanted to do something different, so they hunkered down in an oceanfront house in Rancho Palos Verdes where they built a studio and set to work. All they wanted was to create something that would “make the tiniest dent in music history.” Initially, that eluded them.

“We told ourselves to step out of the box in terms of composition, arrangement, lyrics—the way everything was created,” Gadhia says. “We were in isolation. We lived in this house for nine or ten months and by month five, we were completely delirious. We started overthinking songs, getting too serious about them. We were thinking about it so much that we were preventing ourselves from doing it.”

The freedom of having their own recording studio also meant that they were constantly taking their work home with them. The familiarity had a way of breeding contempt.

“When we got off the road, we took some time to just use the house as a house,” Gadhia recalls. “A couple weeks in, that feeling of ‘this is always here’ slowly crept in. We would sometimes spend 20 hours a day in there, but we realized the long hours don’t mean anything when you’re trying to do something greater. It’s an abstraction, but getting into that mental state can be a hard thing.”

Appropriately, the album’s title track was the first song that lifted their writers’ block and soon the rest of the album followed. They’re just as proud of the result as they are of how they’ve matured as a band. For Ghadia, the songs reflect his most personal lyrics. While their debut focused more on melodies, Mind over Matter finds the frontman forging a deeper connection between the lyrics and the music. The album, he says, is ultimately about existing without overthinking it. Less mind, more matter.