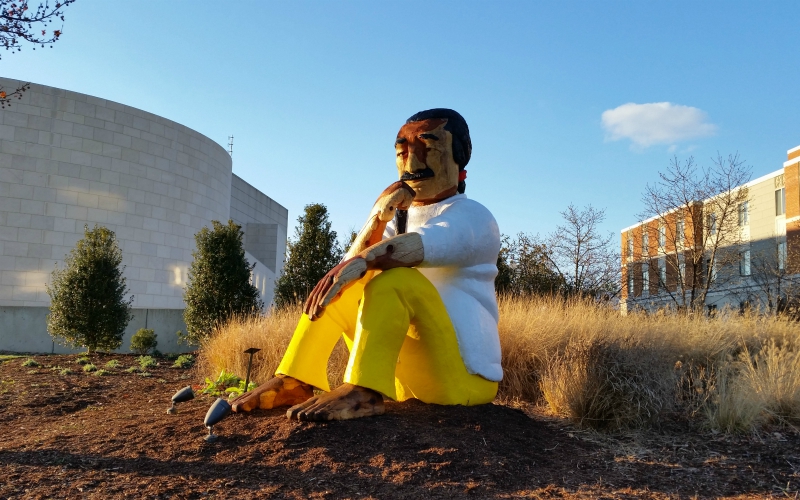 Leonard Peltier looms large. The 73-year-old Native American activist has been in federal prison since 1977, when he was convicted—many believe wrongly so—of murdering two FBI agents at the Pine Ridge Reservation in South Dakota. Peltier has maintained his innocence throughout his imprisonment, and legitimate questions have been raised about the fairness of his trial. But despite several fervent campaigns for clemency (Clinton, Bush, and Obama denied those appeals), he remains in prison.

For activists who would like to see him freed, Peltier represents something bigger than himself: a history of systemic injustice and abuse against indigenous peoples. He may be one individual confined to a prison cell, but socially and politically his significance extends far beyond the walls of the Central Florida penitentiary where he’s serving out his sentence.

The activist’s influence is reflected in the sheer size of Rigo 23’s sculpture of Peltier. Its massive arms, feet, and head are prominent, peaceful, heavy. The brown skin is textured and uneven, roughly hewn out of California redwoods that are as imposing and spiritual in their current state as they once were in a forest. Although it depicts Peltier seated, his legs bent in front of him, the sculpture stands tall at 11 feet high.

Today Rigo’s statue of Peltier sits squarely between four large white columns in the ample, open entry space of the Main Museum downtown (on view for free through May 13). When you enter through the museum’s glass doors, the figure greets you directly, meeting your eyes with a tranquil gaze that belies the controversy that’s been caused by the sculpture.

As a boy in Portugal, Rigo saw his father cry, tears streaming down his face, as he watched political prisoners being released on television. The experience sparked in Rigo a passion for righting the wrongs of injustice. As an artist, he’s long made works that advocate for the wrongly imprisoned, focusing in particular on Peltier.

In 2016, with Obama’s presidency nearing an end, advocacy for Peltier’s clemency ramped up. Rigo built the statue to help draw attention to the cause. As he transported it from California to Washington D.C., where it was displayed on the campus of American University in December of 2016 (just across the street from the Department of Homeland Security), he took the statue’s feet to various sites across the country. From Alcatraz to Pine Ridge to Standing Rock, people were invited to stand with Peltier by standing on the statue’s big wooden feet. (Images from that journey are also on display at the Main Museum.)

In D.C., protests ensued. Citing safety concerns, the University removed the artwork, disassembling it piece by piece without Rigo’s knowledge or help and placing it in storage. Citing the First Amendment, the art world decried the move as censorship. But the statue remained out of sight, locked away like the man himself.

Until now. Inside the Main Museum, the statue sits silently, but brings with it a loud message. On the wall to the statue’s right, another Rigo piece is on display, a large red-and-yellow banner that asks a question: “It’s 2018—why is Leonard Peltier still in prison?” You can see the layers of paint under the numbers where the year has been updated, again and again, each time the banner is displayed.

Rigo’s statue of Peltier is imposing and large. And yet in a sense it is still confined. It’s footprint on the museum’s floor, outlined in cinder blocks, is just six by nine feet in total—the dimensions of a prison cell.

Meet the Extraordinary Artists of the Exceptional Children’s Foundation