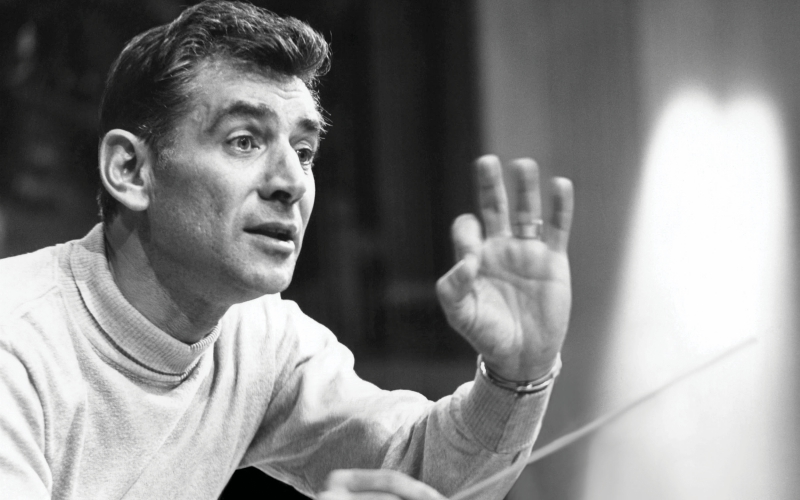 To people under 50, Leonard Bernstein is a line in an R.E.M. song. But from the 1957 Broadway debut of West Side Story (for which he wrote the music) to his stint conducting Beethoven at the fall of the Berlin Wall, the Massachusetts-born composer and conductor was among the most protean and dynamic characters alive.

“I don’t think there is a more complex man in American arts than Leonard Bernstein,” says the Grammy Museum’s Bob Santelli, curator of Leonard Bernstein at 100, which honors Bernstein’s centenary at the Skirball Cultural Center (April 26 to September 2). The show features memorabilia including the conductor’s childhood piano, photographs, audio recordings, and the handwritten lyrics to West Side Story’s “Maria,” plus a karaoke-like booth where you can croon about being a Jet from your first cigarette to your last dying day.

Whatever you think he was, Bernstein, who died in 1990, was always something else: musician, yes, but also quasi-closeted bisexual, social-justice activist, public intellectual, liberal philanthropist, TV star. “When I describe him to kids,” says UCLA musicologist Robert Fink, “I say, ‘You have to imagine Gustavo Dudamel, Steven Spielberg, Lang Lang, and Bill Nye the Science Guy.’” Bernstein’s career had two acts. In the first, he was an American conductor—leading the New York Philharmonic, working on Candide and On the Waterfront, and inaugurating the Kennedy Center. But his composition fell off after the critical savaging of his 1971 work Mass, about a priest’s crisis of faith. Bernstein retreated, then reappeared for his second act as an international celebrity, conducting orchestras in London, Vienna, and Tel Aviv.

Along the way, he became the avatar of an omnivorous American culture that transcended distinctions between high and low. “He was a symbol for a kind of utopian pluralism,” says Fink, “who loved the Beatles, could conduct Berio, and hung out with the Black Panthers and Jackie Kennedy.”

“Our dad was about taking down the walls between genres,” says Bernstein’s daughter Jamie.

The exhibition at the Skirball isn’t the only anniversary celebration in L.A. of Bernstein’s career. This month the Los Angeles Philharmonic, which has already put on several centennial concerts (including a performance of Mass), offers a Dudamel-conducted Chichester Psalms (April 19 to 22). Dudamel—a huge fan—decided years ago to conduct with the maestro’s old baton. “Like Bernstein, he’s very passionate and intense when he’s conducting,” says Santelli. “And he broke it!”