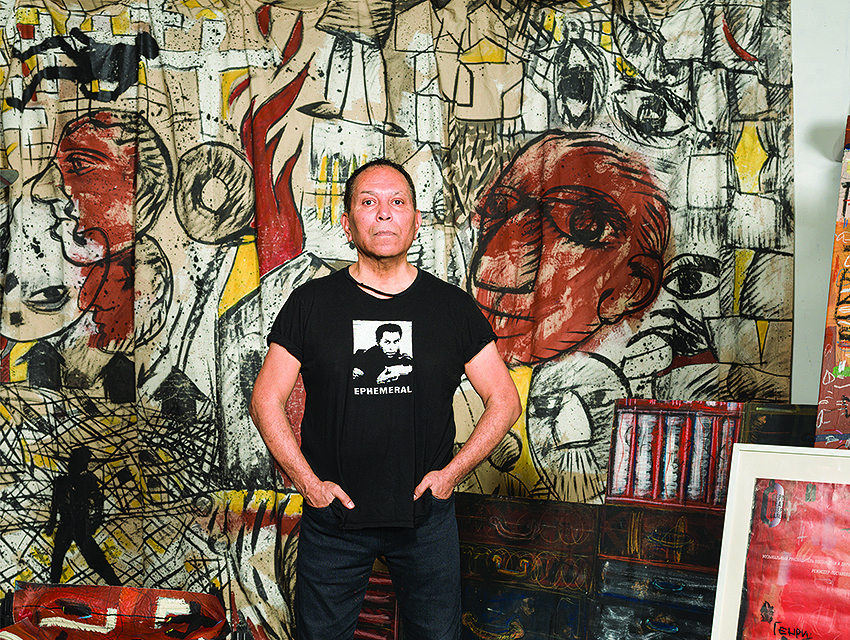 When it comes to traditional set design, Chicano artist Glugio Nicandro—aka Gronk—is not impressed. “Most people go to the theater and they’re wowed by a chandelier coming down,” he says. “I’m wondering, ‘Why the hell are they clapping at a chandelier?’ ” (Safe to say he’ll never work on Phantom of the Opera.) Gronk’s Theater of Paint is now open at the Craft and Folk Art Museum, showcasing a selection of hand-painted backdrops he’s created over the years for productions by renowned director Peter Sellars (The Indian Queen, Ainadamar).

Born in 1954 in East Los Angeles, Gronk cofounded the groundbreaking multimedia art collective ASCO—Spanish for nausea—in the ’70s, making it his business to bring Mexican American artwork to the fore. The group asserted itself through a series of staged “happenings” (duct-taping someone to a wall and dubbing it an “instant mural,” eating a sit-down dinner on the median of a busy street) and poignant acts of defiance (in 1972, he and his cohorts spray-painted their names on the entrance of the Los Angeles County Museum of Art—an institution that, at the time, dismissed the art of Chicanos as “graffiti”). In the ’80s, Gronk turned his focus to large-scale paintings and sets, which led to his extensive collaboration with Sellars.

More than demonstrating his knack for theatricality, Gronk’s Theater of Paint illuminates the artist’s thorough research process: Months spent studying the origins of a play or opera yield evocative pieces designed to “move in harmony with the music,” he says. For the CAFAM exhibition, a series of experimental performances take place on a stage Gronk custom built, providing viewers with an immersive experience—no chandelier required.

The 12 Best Things to Do in L.A. in November