Home Art This LeBron James Mural Went Up, Got Defaced, and Was Restored–All in... 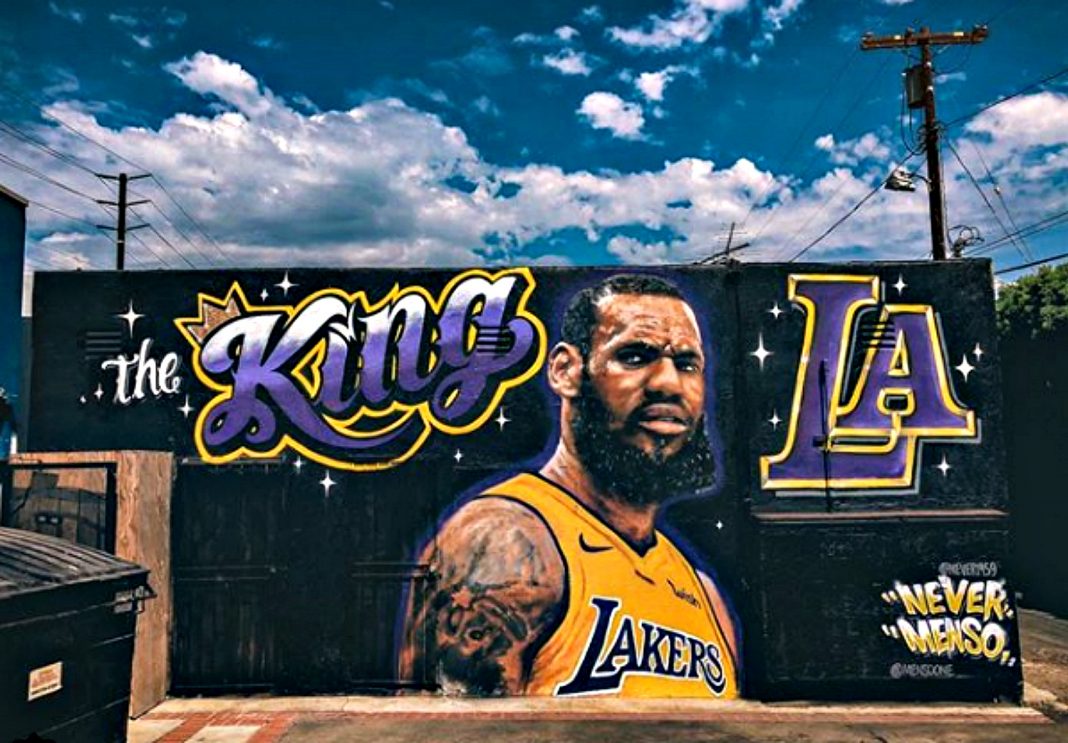 On Friday, local artists Jonas Never and Menso One unveiled their newest work: a LeBron James mural in Venice, celebrating the recent announcement that he will be joining the Lakers basketball team. But unlike most of Never’s pieces, which often depict public figures in the news–he’s the man behind the recent tribute murals of Anthony Bourdain and Chester Bennington that have been spotted around L.A.–this one had some immediate backlash.

Within hours of the artists posting a photo of the mural online, the painting had a bounty out for its destruction. As Sports Illustrated reports, Twitter user @BenOsanze who went by “Lakers Fanbase” on a now-deactivated account, announced a $300 reward for anyone who would go to the Baby Blues BBQ in Venice, vandalize the painting, and make a video of it.

Y’all we did it. I think @BenOsaze deactivated or got suspended lmaoooo pic.twitter.com/pz52OKa1ze

At about 1 a.m. on Sunday morning, according to the restaurant’s security footage, it seems someone took him up on the offer. James’s face was scrawled over in yellow paint, along with the messages “We don’t want you,” “LeFraud,” “No King,” and “3-6” (which, Yahoo Sports helpfully notes, is assumed to be a dig at James’s spotty record at the NBA Finals).

LeBron James is often referred to by the nickname “King James.” In its original version, Never’s lettering on the mural said “King of L.A.” around James’s head. That of seems to have really rubbed some Lakers fans the wrong way. Apparently, they don’t think the team’s new arrival has earned the title “King of L.A.” just yet, with some taking to social media to assert that retired players like Kobe Bryant might be more deserving of such an honorific. (Incidentally, Never himself painted a previous mural near the Staples Center depicting Bryant.)

While that might sound like some people taking a preposition a bit too seriously, the artists ultimately acquiesced. When they went back on Sunday afternoon to restore the mural, they not only covered over the scrawls, they also removed the “offending” of, as Never describes it.

He went on to joke in the caption of his Instagram post of the restored mural that some of the graffiti on his mural seemed to be done by someone so tall, that it might just have been Bryant himself.

RELATED: The Most Instagram-Worthy Murals in L.A.

Intense Loss, Rapturous Victory, Empty Stadiums: A Look Back at the Year in L.A. Sports

After a Year Like This One, L.A. Has Earned a Proper Post-Pandemic Party