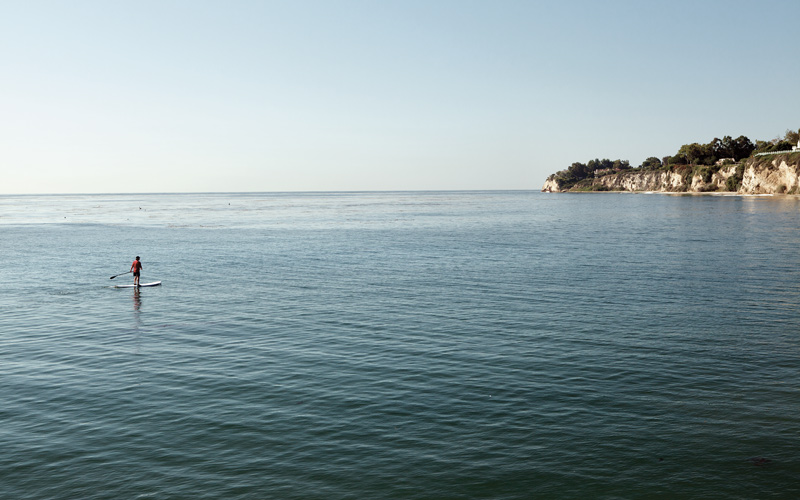 I’d just moved to Venice from the Middle East, where my wife was a foreign correspondent. For years I played a supportive role, mostly raising our young daughter around the region—from Saudi Arabia to Iraq, Turkey to Lebanon—always in a kind of panicked hypervigilance because of the shoot-out on our block in Beirut, more than one car bomb elsewhere in Lebanon, and all the other rigors of being a parent in a faraway place.

Then it was time to leave. By choosing Los Angeles (close to the short-term professorship I’d been offered), my wife and I were thrust into a softer version of life—but under palm trees and by the beach, I admit I struggled for focus, unsure of whether we’d made a mistake by leaving. Gradually, however, we started to appreciate what was different. Among other pleasant by-products, it was refreshing to have such an easy and straightforward time going to the doctor. Flipping through a magazine in the waiting room, I was thinking about how my daughter had grown so tall and strong, while I felt so weak and lost. After years of trying to smother feelings of powerlessness and inadequacy with an excess of caution, I asked myself, Who was I now? Who could I become?

Here, maybe, was a chance to find out. The moment of inspiration came when I saw a remarkable photo in which a woman stood on a board, paddle in hand, a dog on the front, groceries at her feet. It seemed elegant and exotic and powerful. The caption read “Hawaiian woman completes her daily commute,” or something like that. I looked closer at the mechanics of what she was doing: body on board, balanced atop the watery deep. Could I do that?

In a scorching parking lot along Marquesas Way, one of the spurs off that vast acreage of water called Marina del Rey, I listened to the commands of a dude named Wade Lawson, an instructor at Stand-Up Paddling. “Push me across the parking lot,” he said. The guy was shirtless and buff, a helicopter pilot and former college football player. I had no business placing my hands on his bronzed pecs, and my push was unconvincing. “Now try with your arms straight.”

Amazingly, with that simple adjustment, I was able to push that massive man. We walked to a nearby dock, where Wade tossed two menacingly narrow and sharp-tipped boards onto the murky water. He deftly stepped onto his, and I inched gingerly onto mine on my knees. Clutching my paddle, I noted how my board was freckled with these unencouraging little chips from what I imagined were the many fools who’d come before, crashing into rocks and the dock and boats. We paddled a few feet, and I attempted to stand. I fell in.

Eventually, of course, I began to get the hang of it. During that first lesson, Wade reminded me to keep my arms straight as I reached toward the front of the board and to dig the paddle into the water, pulling back and taking the face of it out of the water before I got to my feet. My years in the Middle East had turned me into someone who didn’t believe in himself, who was constantly uncertain, worried, and preoccupied with all that could go wrong. But here I was, moving, believing, making something happen—until a boat went by, unleashing a small set of waves, and I fell in again.

Former New Yorkers from the Midwest and Miami, neither my wife nor I had much knowledge about Southern California. Our first instinct was to live in Topanga, but friends in Los Angeles told us this would be like moving to Mars. So we picked Venice. Our proximity to the water had seemed random, but once I began renting a board from Wade each Friday, the ocean became the site of my new struggle. Sticking to the harbor’s peaceful auxiliary channels, I traced every inch of the maze, increasing in speed and stability. Then I challenged myself to try the busy main channel. I paddled close to the docks, gaining speed, until a boat full of bros went by and I toppled in.

On the water I was learning more about what I could accomplish and how many adjustments I could make to be better. It wasn’t exactly the drama of cheating death or the act of surmounting life abroad, but it was something.

My forearms and chest were tightening, and my skin was darkening. I also began to covet unknown people’s lives, growing more curious about how any of us decided to spend our time. Home to thousands of boats, Marina del Rey is the world’s largest man-made small-craft harbor and offers an odd distillation of some of what’s possible in Los Angeles. I ogled enormous yachts and impossibly tall-masted sailboats as an army of mostly Latino guys motored around in diving gear, scrubbing the bottom of everyone’s boats. I wondered who lived on that crumbling barge or that gussied-up tug and what it felt like to be the kind of person who took Friday off to fill a speedboat with gas and roar off.

Almost more than anything, I looked forward to gliding by one of the houseboats docked there. With weathered decking, a tomato plant hanging from a railing, and a stack of art books in the living room, the place seemed a kind of ode to the simple life. When I came face-to-face with the man and woman who apparently lived in it, they squinted at me distrustfully. “I would, if you’d let me,” I said, accustomed to self-loathing and to longing for something safer, “trade my life for yours right now.”

But it wasn’t true. My wife was thriving with new and exciting assignments. Our daughter was amassing friends, and I watched with pride as she ripped around on a shiny new bicycle. I’d gotten a steady gig teaching at UCLA and had learned how to avoid the 405. I felt stronger and more sure of myself than ever before. On a stunning summer day, Obama’s helicopters flew over. I was on my board, and I raised my paddle in salute. I was happy.

The thing about happiness is you tend to want more. For a year Marina del Rey seemed to have everything I needed. Then one day I paddled beyond it, to open ocean, just past the end of the main channel. I nosed over deep water and was surprised to see a silvery school of fish expand and contract below me. Bobbing on an impossibly complex surface, I looked out over the vast expanse and considered whether I’d pushed too far. I hadn’t asked Wade’s permission (it was his board, after all). Nobody knew I was here. I considered the ramifications of what I’d done.

When I fessed up to Wade, he was ecstatic and exhorted me to paddle as far as I could. Within a month I was traveling miles onto open water, where I saw whales and dolphins. I’d even sprinted to the Venice Pier and back, trying to go faster and faster.

Preparing to leave the channel one Friday, I encountered a man paddling in the opposite direction, yelling something. “Shark!” His eyes bulged. “The coast guard buzzed me and told me to head in and there was a shark and, Oh, God, that it was following me.” I froze, filled with a familiar panic. I couldn’t see any coast guard boats. Nor, of course, could I see a shark. I stared into the water, sensing phantom shapes, hating myself for being so stupid. The man took a final glance at me and sped off. Paddling had unloosed a kind of courage and dedication I hadn’t been able to find in the Middle East. Until this moment I’d felt free, unburdened, ready for anything.

Then I fell in. The shock of the water was extreme as my body plunged into darkness, and it wasn’t hard to imagine the sharp bite of teeth on bone, the hot rush of blood, the pain and the fear. I kicked hard, filled with regret, astonished I hadn’t seen something like this coming. Surfacing and gasping for air, I reached for the board and scrambled up, and for a long time I lay there, completely still.

This could have been reason enough for me to stay in the marina, to ignore the urge I had to push myself, and perhaps to give up on paddling altogether. Back at home, however, I did some research: It turned out I was as likely to be hit by an asteroid as I was to be bitten by any fish. With some hesitation, I went out again the next week but couldn’t stop sharks from populating my thoughts. So I hummed the theme song from Jaws, daring the ocean to test me again.

My daughter completed kindergarten, and we enrolled her in first grade. The palm trees shed their fronds, and my contract was renewed at UCLA. After doing the math, I decided it was time to buy my own board.

Tim Sanford was a tall, powerfully built ex-bartender. An old friend of Wade’s, he was also a serious paddle surfer and had designed a line of custom paddleboards. We stood on the sand, waiting for a break in the waves. I’d never launched from anything but Wade’s dock. With my heart slamming in my chest, I threw myself over the foam, paddling my new board after Tim, trying to get beyond the break before the next set rolled in. Huffing and puffing, I struggled to concentrate on what Tim was saying about how we should catch a wave back to shore. Before I really understood what was occurring, a wall of massing water was coming my way and I was pointing the board toward the beach, slashing into the water as fast as I could. I felt myself rising and hurtling forward, and I let out a yelp of joy.

That day marked the end of my flat-water obsession and the beginning of a campaign to become a serious surfer. Soon I was taking my paddleboard to swells from San Onofre to Leo Carrillo, replacing fear of the unknown with a pursuit of what was possible. Surfing every day, I could barely recognize the version of me who had thought only about the worst thing that could happen.

A full year would pass before I returned to the marina’s channels and docks. It was a beautiful morning when I unloaded two boards—one big and one small—from my car. The plan was to show my young daughter how to paddle. Her hands were shaking just as mine had. I pointed at my chest and told her to push me; she laughed. Then I told her to do it with straight arms. Together we paddled onto the blue. She soon fell in, mewling in surprise at the cold, but we all have to start somewhere.