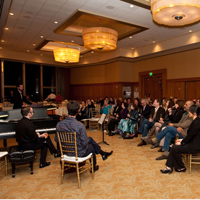 Once a month, the Angeles Concerts Artists Corporation presents Le Salon de Musiques on the 5th Floor of the Dorothy Chandler Pavilion, where you can enjoy a chamber music concert in a smaller space (with a killer view of Los Angeles behind the musicians) and discuss afterwards. While chatting, you sip champagne and consume finger sandwiches (courtesy of Patina). I attended this month’s concert, which featured Francois Chouchan on the piano and Antonio Lysy on the cello. It was heaven. It’s wonderful to see such accomplished artists up close as they play, you become part of the music. As one attendee said to the musicians, “We feel what you feel.” The program was Schubert and Grieg, and musicologist (I want that title) Julius Reder Carlson helped lead the discussion. Lysy played a cello made by Carlo Tononi, made in Bologna in the 1700s. He discussed its history, which he had traced since its creation.

These evenings are a little gem. They are held monthly, and tickets are $65 and $45 for students. They run until May. Here is the schedule: http://www.lesalondemusiques.com/concerts-schedule-dorothy-chandler-pavilion.asp