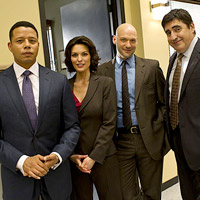 Naturally, we were among the first to cry out when it was announced this week that Law & Order: LA has been cancelled by NBC. Yes, the series got off to a rocky start and endured significant cast changes in the second half of its first season, but its not every year we get a show that’s so L.A.-centric, and it has been fun to see deviants and detectives doing their thing at some of our favorite stomping grounds (Runyon Canyon, Benedict Canyon, Silver Lake…) in recent weeks. Last night’s episode, in fact, was set in the Hayden Tract, the very place we recommend for an architecture walk in our June issue, on newsstands now. Watch the episode—along with others—here, then check out our guide to the industrial neighborhood in Culver City. It’s not so scary in real life, promise.